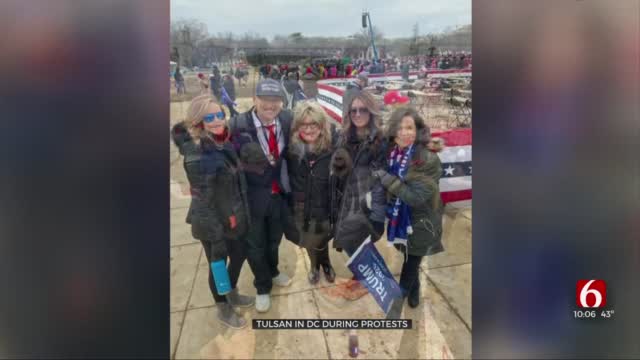 A Tulsa woman was in Washington DC during Wednesday’s protest, but said she left before things turned violent.

Kari Romoser said everything was peaceful and exciting earlier Wednesday but said it's very sad to see how it all ended.

Romoser and three friends left Tulsa Tuesday to be a part of the pro Trump rally in our nation’s Capital. She said it was a great experience and they made a lot of new friends.

"Everybody we met, we have felt like we've known them for years," Romoser said. "It's that kind of group."

Romoser said the group marched to the White House and Washington Monument, and she got close enough to see President Trump speak.

Romoser said she and her friends went back at their hotel to warm up and that's when others started heading to the Capitol.

She said they heard a lot of sirens, saw firetrucks and police cars, and turned on their TV to see what was happening.

"Then to come back and find out the reality was a gut punch," Romoser said.

Kari said the riots were a stark contrast from earlier in the day, and she wonders if bad actors were pretending to be Trump supporters to stir up the crowd.

"It's ironic it went from such a monumental exciting time to do something like that,” Romoser said.

She said being in D.C. now is unsettling, but they're safe in their hotel room, trying to focus on the positive parts of their day.

Romoser said she and her friends are set to come back to Tulsa on Friday if everything is safe.