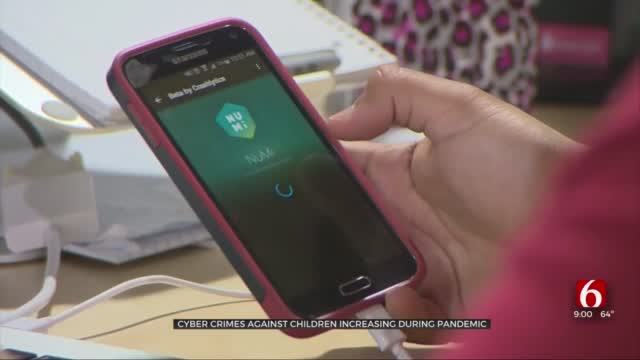 As children spend more time online during the pandemic, experts warn they are at much greater risk now for child predators. National data shows cyber-crimes against children increased 28% from 2019 to 2020.

"Before all that you had to literally place yourself in front of a child. You know whether it's a counselor or a teacher or you know one of those leadership roles where you're around kids,” said Jason Weis. “Right now, you know, you can just have good internet connection and a smart phone and a few social media sites, and you can groom 5, 10, 15 kids at the same time; it's a numbers game."

A Tulsa County deputy said it is not a matter of if your children will be targeted on social media, but when; however, there is a lot you can do to keep them safe.

Jason Weis is a full-time investigator and co-founder of The Demand Project which is a nonprofit aiming to put an end to all sex crimes. Weis' fake account for detective work impersonates a child to lure predators. He said he gets anywhere from 10 to 15 requests daily, and at least half the predators send a direct message right away. Weis told us there are two major contributing factors as he dials in on the data. For one, technology is ever evolving, and its users are taking advantage of it.

"Any app that has the ability to direct message anyone, you know, whether it's an online game, whether it's a game you can download on your phone, or whether it's Facebook or Snapchat, Instagram or TikTok, anything that has a direct messaging capability is an open door for a predator,” said Weis. “If that person knocked on their front door and said, ‘Hey do you mind if I come into your house, do you mind if I go up into your kids' bedroom, hey do you mind if I go into their bathroom,’ 100% of parents would say absolutely not, but when they hand them those devices and they don't equip that child for what they're going to see and hear that's exactly what's going to happen."

With the pandemic, children are spending more time socializing and learning online. Weis believes isolation is dangerous for children who lack attention and are looking to fill a void. He said today's number one producer of child pornography is children themselves.

“When I was growing up the kiss was 'the first base,' you know? Now the first base is sending a nude back and forth,” Weis said.

"What child doesn't want to be told that they're beautiful, handsome, important, or valuable?” said Weis. “The bad guys on the other side of that computer screen are more than willing to be that person."

Weis said often a message showing interest is how the grooming process begins.

"If they're good at what they do, you know especially if it's a guy grooming a child, a girl, and that girl may be at risk, or maybe she's bullied or maybe she has a single mom you know that's around and no male figure to help affirm her in who she really is and how pretty she is and how beautiful she is and how much of a princess she is and how valuable she is, that person, that groomer will fill that gap," said Weis. “It's a slow, methodical process to desensitize and manipulate a child into getting them to do and say anything."

Here are some of the warning signs Weis said parents need to know. Many social media sites have a minimum age of 13 to use, so many children lie about their age to gain access.

"If your 10-year-old or 11-year-old is on TikTok or Snapchat or Instagram or Facebook, in order for them to get on that app, they had to lie about their age and so is that really how you want to start your social media platform is through deception,” Weis said.

Weis also said predators use apps like Kik and Whisper. He said a big red flag is if your child starts receiving unexplained gifts like gift cards, because predators send those out as a part of the grooming process.

Lauren Merrill is the mom of a 13-year-old. She said it is very important to have tough conversations with your kids before someone else does.

“I try to make sure that we’re not talking down to her about it, and that seems to help her listen a little bit more and just kind of ask her how she feels about it. Kind of come up with some rules together,” Merrill said.

Merrill said she and her husband use an app called Bark. She told Channel 6 this is an app that combs through everything for them, finding key words and alerting them when certain content is detected. This gives Merrill peace of mind when her daughter is using electronics.

"I think that it's definitely a legitimate concern. We don't want our kids to not be able to contact their friends, especially when they're stuck at home and they are spending a lot more time on social media, and screen time, and even through Google classroom,” Merrill said.

Merrill started the TulsaMoms group and Facebook page, which she said is super helpful. She said it is important for parents to have a community to surround themselves with. Merrill believes it is also important as a parent to give yourself some grace.

"Being a mom is hard. We're going through things that we've never gone through before especially when it comes to the pandemic, and what works for other families might work for us and it might not, but it's good to have ideas to bounce off each other and just have this great community to vent or get support from,” Merrill said.

Weis said to look for behavioral changes like keeping secrets because predators thrive in secrecy.

"Role play with them, like you know, we role play about tornado drills and fire drills. We have difficult conversations with our kids regarding sex. I mean, if you're not going to have a conversation with your child about sex, the online predator will,” said Weis. “Virtually every predator that I've talked to online is willing teach whatever they want to learn."

Weis said there is nothing more precious than protecting children and preventing them from becoming another statistic.

"Once you steal a child's innocence, it is very hard for them to trust and they have different types of behavioral consequences because of that, so I mean, protect that purity. Protect that innocence,” Weis said.

Weis said kids need to know it is okay to say no and that they should tell someone when something uncomfortable has happened.

For more information on The Demand Project, click here.

For more information about the National Center for Missing & Exploited Children, click here.