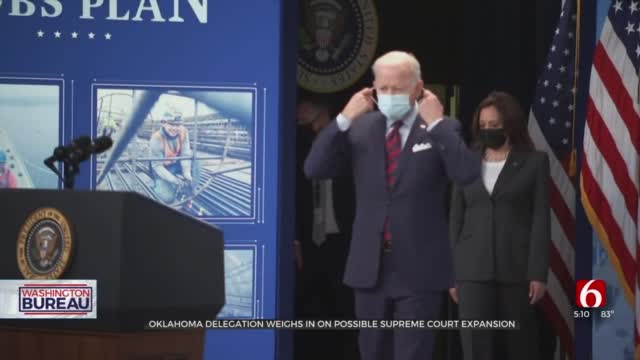 The United States. Supreme Court is hearing its final arguments of the 2020 term this week, causing some to wonder if this could be one of the last times we see a court with just nine justices.

Earlier this month, President Biden fulfilled a campaign promise by establishing a commission to study the possibility of reforming the high court, which includes the possibility of adding more seats. Critics say the president and the Democrats are looking to 'pack the court.'

"When you see a socialist takeover of a country," said Rep. Markwayne Mullin, (R) OK-2, "the first thing they do when they go into power is they change the courts."

Congressman Mullin and other Republicans have been quick to point out that if President Biden does end up pushing for an expansion of the Supreme Court, he would be contradicting comments he made as a Senator almost forty years ago about President Roosevelt's failed attempt to expand the Court.

"He said, ‘President Roosevelt clearly had the right'.." said Sen. James Lankford, reading from the text of then-Senator Biden's 1983 floor speech, "'but it was a bonehead idea,' Senator Biden said. ‘It was a terrible, terrible mistake.'"

Many liberal Democrats are pressuring Biden to add more seats and rebalance what is now a decidedly conservative court, the result of Senate Republicans snubbing President Obama's 2016 nominee Merrick Garland and President Trump then filling three vacancies, including one just days before the election.

“There is a difference between filling a vacant seat and adding extra justices to politically sway decisions." said Rep. Tom Cole, (R) OK-4, in a statement, "Moreover, this could trigger a terrible precedent…”