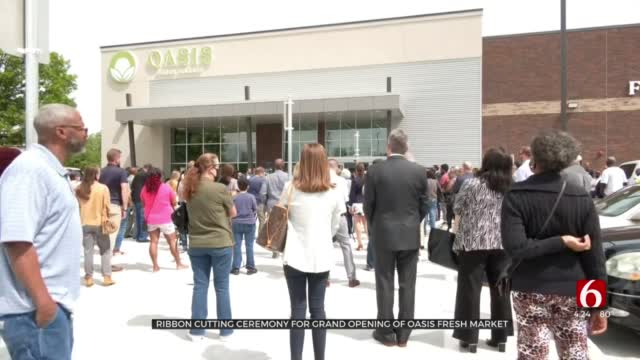 People who live in the area said they've been waiting a long time for this opening.

“The last true grocery store that I remember being here is Albertson's that used to be over there. Just remember going to church and afterwards running over to the grocery store to get a quick meal to make at home and haven’t been able to do that," said Calah McQuaters.

“You know the USDA classifies a food desert as not having a grocery store within a mile of an urban or underserved community and ten miles in a rural. Well today what was once a food desert… there is an oasis within the desert," said AJ Johnson.

Johnson is one of the Oasis Fresh Market owners. He said it's taken a lot of people and companies to help make this grand opening happen. He said the store is also creating jobs.

“That’s the most exciting thing. We’ve got 30 employees and I want to say 25 of them are from right here in this community," said Johnson.

Calah and Amorissa McQuarters said they are excited about how many choices they have.

“To have vegan options where even people who are vegan, vegetarian, and things like that they have access to that now. It’s not just meat; so, it’s just very exciting," Calah McQuarters.

Johnson said they’re planning on breaking ground later this year on a second Oasis grocery store in a food desert. That one will be on the west side of town.