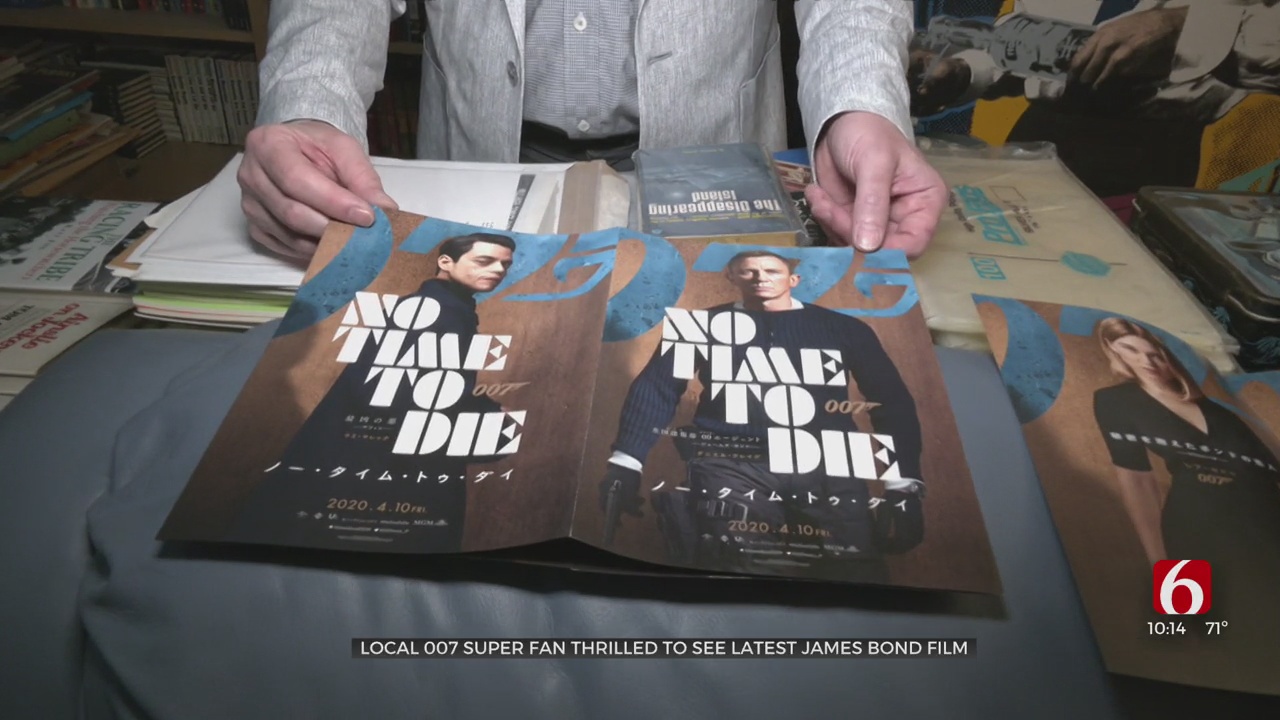 The latest James Bond film is finally going to be in theatres after a long pandemic driven delay. One big-time Tulsa Bond fan is getting an early screening for "No Time To Die" before Friday's official release.

His name is Frank, Brad Frank.

Frank and other Bond fans have been waiting for more than a year to see the film. Frank said he's glad they didn't default to streaming.

"When I was growing up, I always loved movies and I always liked reading," said Frank.

Frank said he loves the films, but his passion is for Ian Fleming's novels.

"Fleming had a style of writing that just draws you in. You start it and you just want to keep going. They are rich in detail but not so heavy in the detail that it bogs you down," said Frank.

Bond is back to the big screen. Frank has even flown to England for the premieres of many of Bond films.

"In my tux, on the red carpet along with the stars and other celebrities," said Frank.

With the pandemic, he's watching the latest movie in Tulsa. Ian Fleming wrote 12 novels and two collections of short stories.

"And only about five or six of the films were anywhere close to what was in the books," said Frank.

'No Time To Die' is the 25th film in the franchise featuring the sixth Bond, Daniel Craig.

"This is his fifth film, and he swears up and down it's the last one he will do," said Frank.

Frank said Sean Connery, who was the first actor to play Bond on the big screen, defined the character. For that reason, he will always be Bond and every actor is measured against him. Frank said he's partial to Daniel Craig who may not fit the classic image of James Bond, but he thinks Craig plays the character closer to how Fleming wrote it than anyone else in the role.

"He was darker at times almost conflicted character. More of a psychological background to him," said Frank.

Frank said he doesn't know who the next Bond will be, but Craig is a hard one to follow.

Frank said he really liked the new film and said it was a good story, with good action, acting, etc. He said it definitely had a lot of surprises and is a good follow up to the previous film.

"In fact, much better than that one," said Frank.