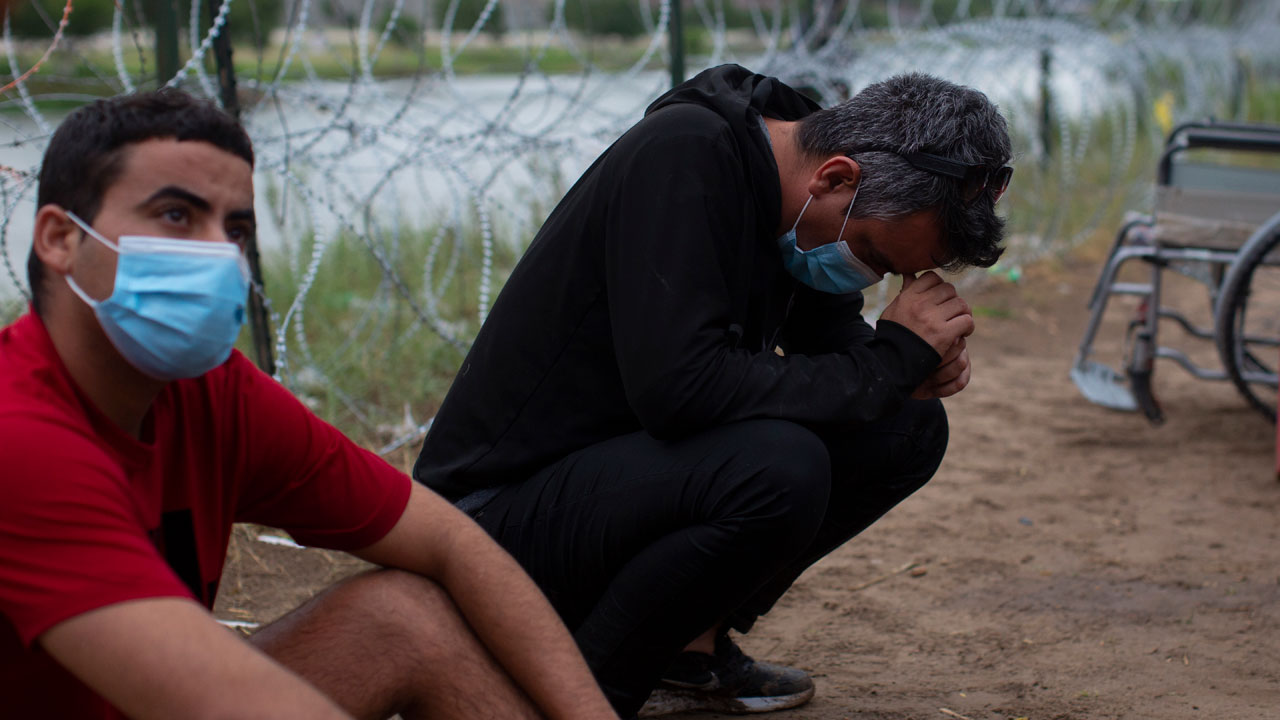 As the sun set over the Rio Grande, about 120 Cubans, Colombians and Venezuelans who waded through waist-deep water stepped into Border Patrol vehicles, soon to be released in the United States to pursue their immigration cases.

Across the border in the Mexican town of Piedras Negras, Honduran families banded together in a section of downtown with cracked sidewalks, narrow streets and few people, unsure where to spend the night because the city’s only shelter was full.

The opposite fortunes illustrate the dual nature of U.S. border enforcement under pandemic rules, known as Title 42 and named for a 1944 public health law. President Joe Biden wanted to end those rules Monday, but a federal judge in Louisiana issued a nationwide injunction that keeps them intact.

The U.S. government has expelled migrants more than 1.9 million times under Title 42, denying them a chance to seek asylum as permitted under U.S. law and international treaty for purposes of preventing the spread of COVID-19.

But Title 42 is not applied evenly across nationalities. For example, Mexico agrees to take back migrants from Honduras, Guatemala, El Salvador and Mexico. For other nationalities, however, high costs, poor diplomatic relations and other considerations make it difficult for the U.S. to fly migrants to their home countries under Title 42. Instead, they are typically freed in the U.S. to seek asylum or other forms of legal status.

Hondurans in Piedras Negras ask Cubans arriving at the bus station for money, knowing Cubans will have no use for pesos because they will go directly across the border. While Mexico agreed in April to take some Cubans and Nicaraguans expelled under Title 42, the vast majority are released in the U.S.

“It was in and out,” Javier Fuentes, 20, said of his one-night stay in a rented house in Piedras Negras. On Sunday morning, he and two other Cuban men walked across the Rio Grande and on a paved road for about an hour until they found a Border Patrol vehicle in Eagle Pass, a Texas town of 25,000 people where migrants cross the river to the edge of a public golf course.

Overnight rains had raised water to about neck-level for most adults, a possible explanation for the absence of groups numbering in the dozens, even over 100, that frequent the area many days.

“Slow start to the morning,” a Border Patrol agent said as he greeted Texas National Guard troops watching four Peruvians, including a 7-month-old boy who crossed with his parents after several days crammed into a rented room in Piedras Negras with 17 migrants.

As the water dropped again to waist-level, about three dozen migrants gathered at a riverfront public park that also drew local residents in Piedras Negras, which considers itself the birthplace of nachos. Infants and young children joined a largely Honduran crowd to cross. One Honduran woman was eight months’ pregnant in obvious pain.

Eagle Pass, a sprawling town of warehouses and decaying houses that many major retailers have overlooked, is one of the busiest spots in the Border Patrol’s Del Rio sector, which includes about 250 miles (400 kilometers) of sparsely populated riverfront. Last year, about 15,000 migrants, mostly Haitians, assembled in nearby Del Rio, which isn’t much larger than Eagle Pass. Grain fields are about all that separates either town from San Antonio, about a three-hour drive to the east.

The relative ease of crossing — migrants walk across the river within a few minutes, often without paying a smuggler — and a perception that it is relatively safe on the Mexican side has made the remote region a major migration route.

Texas’ Rio Grande Valley has long been the busiest of nine Border Patrol sectors on the Mexican border, but Del Rio has surged to a close second this year. Yuma, Arizona, another spot known for relative safety and ease of crossing, has jumped to third-busiest.

Del Rio and Yuma rank sixth and seventh in the number of agents among the nine sectors, a reflection of how Border Patrol staffing has long lagged shifts in migration flows.

Other parts of the border are less patrolled than Del Rio, a plus for migrants trying to elude capture, but are more rugged and remote, said Jon Anfinsen, president of the National Border Patrol Council’s Del Rio sector chapter.

Anfinsen calls the Del Rio sector “sort of a happy medium” for migrants seeking to balance the appeal of remote areas with safety.

Cristian Salgado, who sleeps on streets of Piedras Negras with his wife and 5-year-old son after fleeing Honduras, said the Mexican border town is “one of the few places where you can more or less live in peace.”

But his excitement about the Biden administration’s plans to lift Title 42 on Monday evaporated with the judge’s ruling. “Now there is no hope,” he said.

Hondurans were stopped nearly 16,000 times on the border in April, with slightly more than half resulting in expulsion under Title 42. The rest could seek asylum in the U.S. if they expressed fear of returning home.

“Cubans get in automatically,” said Joel Gonzalez, 34, of Honduras, who tried eluding agents for three days in Eagle Pass before getting caught and expelled. Agents told him asylum the U.S. was no longer available.

Isis Peña, 45, had turned down an offer from a fellow Honduran woman to cross the river. The woman called from San Antonio, saying she was freed without even being asked if she wanted to claim asylum. The woman now lives in New York.

Peña tried crossing herself the next day, an experience she doesn’t want to repeat for fear of drowning. After about four hours in custody, an agent told her, “There is no asylum for Honduras.”