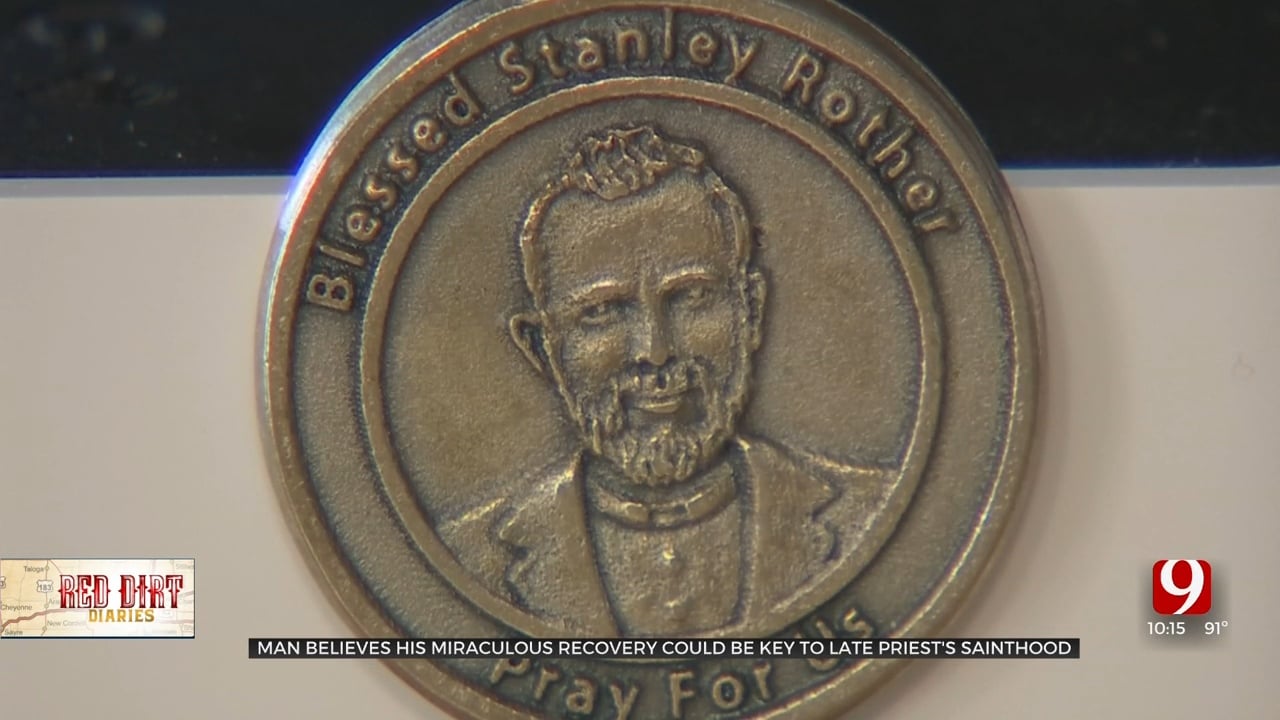 An Oklahoma born Priest, murdered in his church, is one step away from sainthood. That one step though is a BIG one: he needs to be credited with a miracle. We talked to one metro man who says he's living proof of just that in our Red Dirt Diaries.

When you're in need of help from above who do you pray to?

Johnny Workman believes he's here today because his family answered that for him after a horrible accident in 2018.

“I felt something kind of hit me in the back and when I turned, I got trapped,” he explains.

Trapped by run-away 30,000-pound asphalt roller. The weight of two elephants pinned him against roller, crushing him.

“I saw myself in the mirror, I saw myself changing colors and then I blacked out,” he says.

Workman suffered 27 fractures to his chest alone. While in a medically induced coma, his family placed a medal of Blessed Stanley Rother on Workman's chest and prayed for the intersession of the Priest who grew up in Okarche.

“I believe that's when it happened- the miracle,’ says Workman.

Workman remains unwavering in the vision he experienced while unconscious.

Rother served his church in Guatemala during a time of civil war. Thousands of Catholics were killed. In 1981 three men entered his church and executed Father Stanley. In 2016 Pope Francis officially recognized him as a martyr for the faith putting him closer to sainthood.

“We have one more step let to go and that means a verified miracle- verified by the Vatican,” explains Diane Clay with the Archdiocese of Oklahoma City.

That's one of the reasons the shrine in south OKC, which will hold Blessed Stanley's remains is opening later this year.

“Having a shrine dedicated to a person that provides an opportunity and encourages people to seek his intersession right where he is,” says Clay.

The Vatican has a Miracle Commission that goes through the thousands of miraculous claims. Ninety-Nine-point 9 percent are medical miracles. For it to be considered a miracle, it has to be spontaneous, instantaneous and the person needs to be completely healed with NO natural explanation of what happened.

Workman describes his recovery has nothing short of miraculous.

“Doctors nurses and staff would tell me almost every day I was lucky to be alive.”

A letter of his account has been delivered to the Oklahoma City Archdiocese describing his now healed body as the result of more than good luck.