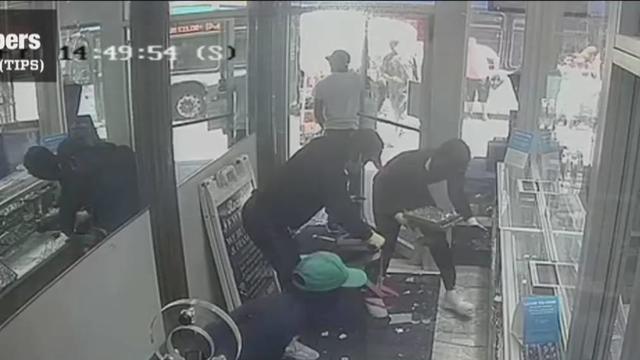 An investigation is underway into a robbery by four masked men who brazenly broke into a Bronx jewelry store last week and made off with an estimated $2 million worth of merchandise, according to the NYPD.

The incident, which involved four men wearing face masks and was recorded by the business' surveillance camera, happened just after 2:30 p.m. local time on Friday afternoon. Footage shows one man initially standing at storefront door of Rocco's Jewelry, a retailer whose shop is located on a busy avenue in the Bronx, steps from Fordham University and down the road from the New York Botanical Garden.

In the video, the first man waits at the entrance before opening the door. He proceeds to hold it open while three additional men, each dressed in dark clothing, rush into the store. The trio uses hammers to break open display cases lining the desk at Rocco's Jewelry, rapidly pulling items from the shelves and shoving them into their bags.

The first man continues to stand in the doorway throughout the 45-second video, facing the sunlit street where a number of people are seen walking by. NYPD Crime Stoppers shared the clip on Twitter, alongside a message asking anyone with information about the theft to report it via phone or direct message.

Witnesses later suggested that the robbery had been carefully planned, as it only lasted about a minute, according to CBS New York. Rocco's Jewelry was closed on Saturday while detectives examined the scene, and determined that the collective value of the stolen goods was about $2 million, CBS New York reported.

None of the four individuals who carried out the robbery have been identified as of Sunday morning, nor has NYPD shared additional updates regarding whether or not they have been found. For tips, police are offering a reward of up to $3,500.