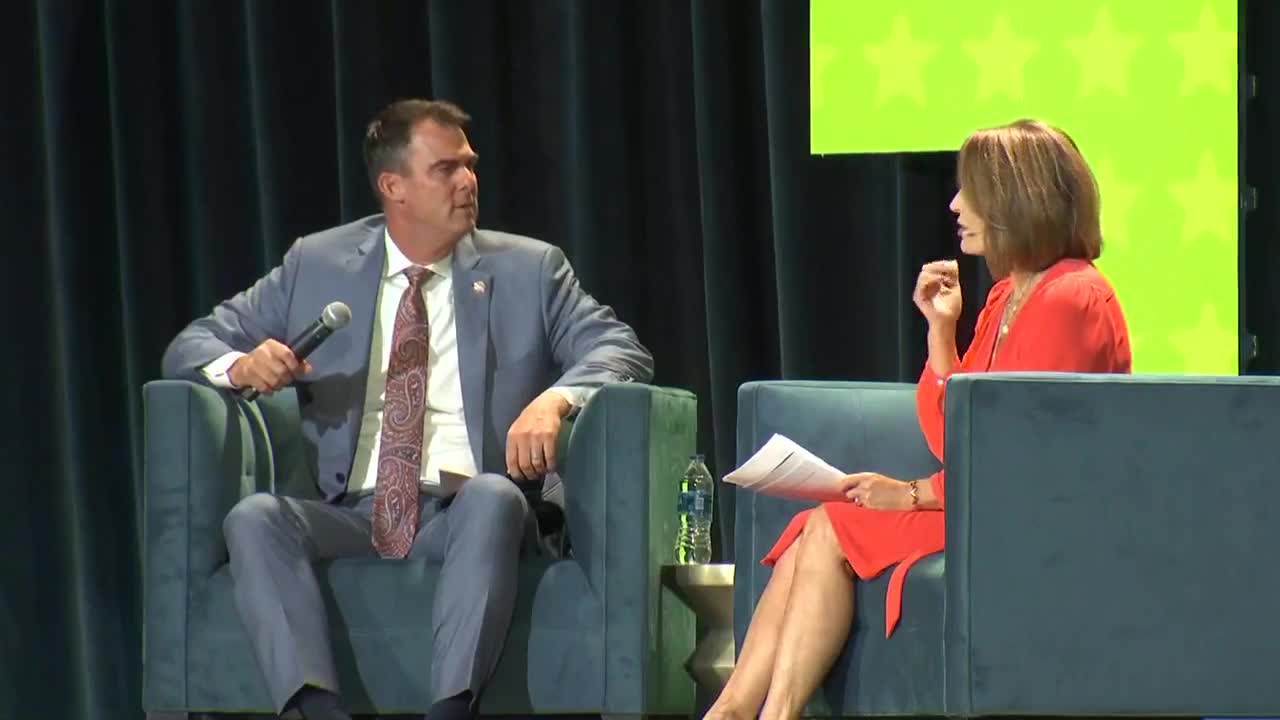 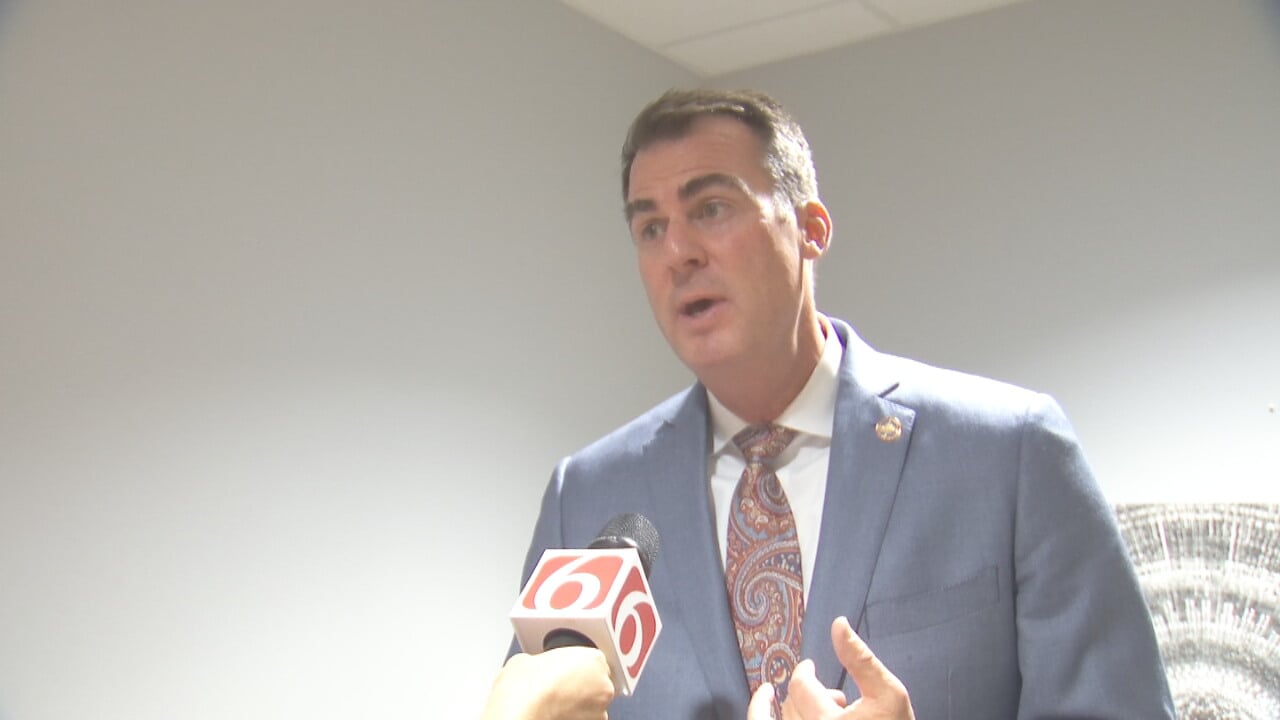 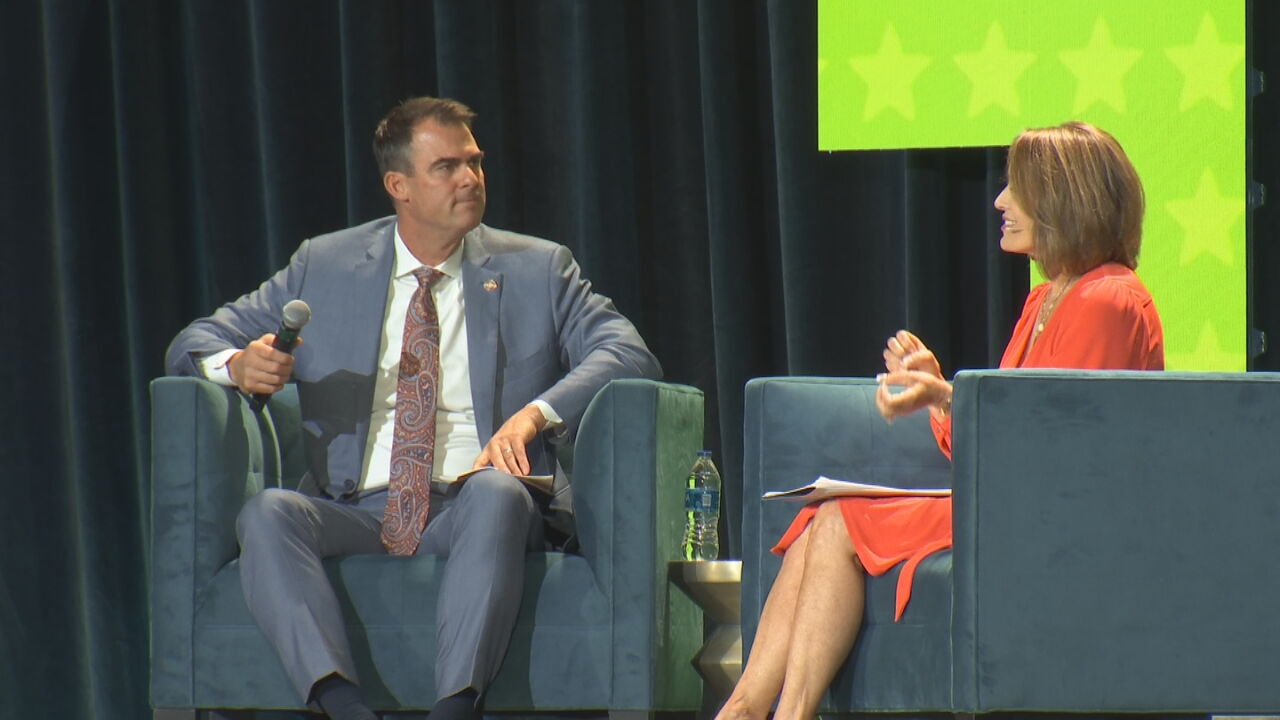 Governor Kevin Stitt came to Tulsa Thursday to give his annual address to the northeast Oklahoma business community.

He spent a lot of time talking about what it means to be a top 10 state.

He also added that Oklahoma is number 11 in the country in migration.

The Governor said the state's two largest industries are (1) oil & gas, and (2) aviation & defense, which he told us has a $45 billion impact for Oklahoma. He praised the Tinker Air Force Base which he said is the largest commercial maintenance and air repair facility in the world.

He believes energy independence is a national security issue. "They canceled the Keystone pipeline day one in office. They make it almost impossible to drill on federal lands," said Stitt.

The Governor told us Oklahoma is number 6 in oil production, 4 in natural gas production and 2 in wind energy production; he also signed an MOU with Arkansas and Louisiana to 'lean into hydrogen.'

Stitt mentioned how business and tourism are booming, citing the PGA Championship, the Route 66 Commission, Project Ocean, and partnerships with companies like Canoo.

He wants to bring more major corporations to Oklahoma.

Stitt said Oklahoma has the lowest unemployment rate in state history and compared the cost of living to places like California.

The Governor said we're in a good place financially with about $3 billion in savings, but with inflation the highest it's been in 40 years, he wants to focus on energy policies, lowering taxes and the removal of Oklahoma's grocery tax.

"That is a regressive tax. In other words, with lower income, they spend a higher percentage of their income on groceries than people in the higher income bracket," said Stitt. "We can absolutely afford it. I will never put Oklahomans in a bad situation. We have this large savings account. We are living within our means. But next year we have a budget surplus. We don't need to just keep piling that savings. We need to return that to taxpayers."

Stitt said in 2019 he gave teachers a huge pay raise and this year he passed a bill to pay teachers up to $100,000 to keep quality teachers in the classroom instead of them feeling compelled to get into administrative work for better pay.

The Governor said he's put more money toward education than any other governor in our state, but admits more work needs to be done.

"Education is a big one. I believe parents want to be more involved in their kid's school. They want to know what's being taught. We should demand higher standards. More transparency in our education system so I'm gonna be focused on that," said Stitt. "More options in education. I do not believe we should trap parents in a school system just because of their zip code. Other states are figuring out we need to unlock more charter schools, more Christian schools, more private schools, more catholic schools. More public schools. Why would we trap a parent in a school district if their kid is getting bullied or the test scores aren't or their teaching their kids and their grades aren't college ready or career ready."

He also plans to focus more on infrastructure and healthcare.

Governor Stitt still isn't backing down from his positions on issues involving tribes.

"My door is always open, and I want to move on, and I want to move forward but the fact of the matter is, was that McGirt was bad for Oklahoma. It was dividing Oklahoma. It was hurting law enforcement, so I was very excited about the Castro case which basically simply says now the state can prosecute nonnatives to protect native victims," said Stitt. "The city of Tulsa is fighting a case to enforce a traffic ticket. And the interesting thing is I've got 6 tribes that are saying no no no no. An Indian of their tribe doesn't have to pay a speeding ticket in the city of Tulsa. So, Tulsa is fighting that. It's going all the way to the tenth circuit. So, we have to fix this thing. We can't have two sets of rules. It's a fairness issue. We can't have a certain race and not have to pay speeding tickets or parking tickets but everybody else does. It just makes no sense to me. It makes no sense to Oklahomans."

He said there could be serious issues if a judge sided with the defendant.

"It would be devastating. If the tenth circuit said that that would be devastating. That would mean basically that if you're a tribal member and remember, I'm a member of the Cherokee Nation, that the City of Tulsa could not give me a speeding ticket, and that's just un-American. We have an equal justice system no matter what your race is," said Stitt. "Wednesday the tax commission just heard a case where there's 9,000 protests where natives are saying they don't have to pay taxes that live in the eastern part of Oklahoma. Yet they all go to the same public schools. We drive on the same roads."

As far as public safety goes, Governor Stitt said he is focused on people's physical and mental wellbeing. That includes a wellness division for first responders and a new, 24/7 Mental Health Hotline reached by dialing 988. He wants this to be the first 'hope centered state.'

"As soon as I saw that Uvalde situation, I mean we all saw that on the news and what was happening down there. I went to work with my Department of Safety, and I issued an executive order. We call it SOS, Safety in our School System, and we have about 10 different points. So right now, the department of public safety is training, doing an assessment across every school district on their safety. We also in technology in the schoolteacher's hands. Getting out of the middle man, so a push of a button that geofences where they're at, contacts every single law enforcement in that county and we're also training Municiple police departments with the latest tactic to give them the training and also the supplies, and the things that they need to make sure that any kind of active shooter situation that we can get after it very, very quickly in the state of Oklahoma," said Stitt.

When asked about medical marijuana, he said the legislature has signed 9 different bills this year and gave money to hire 80 new enforcement officers.

Stitt also said there's been a huge change in how we deliver healthcare in Oklahoma that will take a few years to roll out. In the end, he added the importance of career tech and promoting all types of jobs to help fill roles for businesses struggling.

Protestors gathered outside the Cox Convention Center today. On woman told us Oklahoma's abortion ban will keep people from moving to this state and she believes the governor is a threat to public education, so she is supporting Joy Hofmeister in the election.