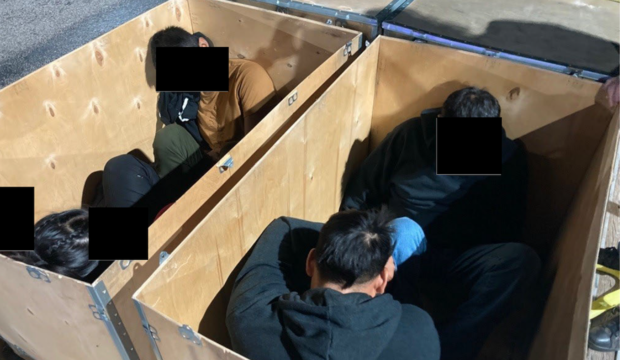 The Department of Justice said eight people were arrested for their alleged involvement in a human smuggling network near the Texas-Mexico border.

An indictment unsealed on Tuesday claims that the network — led by 31-year-old Erminia Serrano Piedra, also known as "Boss Lady" — made millions of dollars by illegally transporting migrants from Mexico, Guatemala and Colombia across the U.S.

According to the indictment, migrants and their family members paid the group to illegally transport them to the U.S. The group allegedly used drivers — who were paid up to $2,500 per migrant — to pick up the migrants near the U.S-Mexico border and harbor them at "stash houses" along the way as they transported them further into the states, the DOJ said.

However, the migrants were subjected to "deplorable conditions" during the journey. The drivers would allegedly hide them in suitcases in pickup trucks, cram them in the back of tractor-trailers, and even put them in repurposed water tanks and wooden crates strapped to flatbed trailers, according to the indictment.

"The human smuggling organization allegedly used methods to transport migrants that placed their lives in danger as they were frequently held in contained spaces with little ventilation, no temperature control and in conditions that placed them at great risk," the DOJ said.

Attorney General Merrick B. Garland said the indictments show the success of the Joint Task Force Alpha, which was created in June 2021 to help the Department of Homeland Security combat the rise in human smuggling from Central America. It focuses on "networks that endanger, abuse or exploit migrants, present national security risks or engage in other types of transnational organized crime," according to the DOJ.

"Human smugglers are criminals who do not care about human life," U.S. Customs and Border Protection deputy commissioner Troy Miller said in a statement Tuesday. "They lie to make money, convincing vulnerable migrants to hand over what is often their life savings in exchange for empty promises to get to the United States."

The bust comes months after 53 migrants were found dead in an abandoned tractor-trailer on a back road on the edge of San Antonio. According to the Justice Department, two men charged in the incident are potentially facing the death penalty.