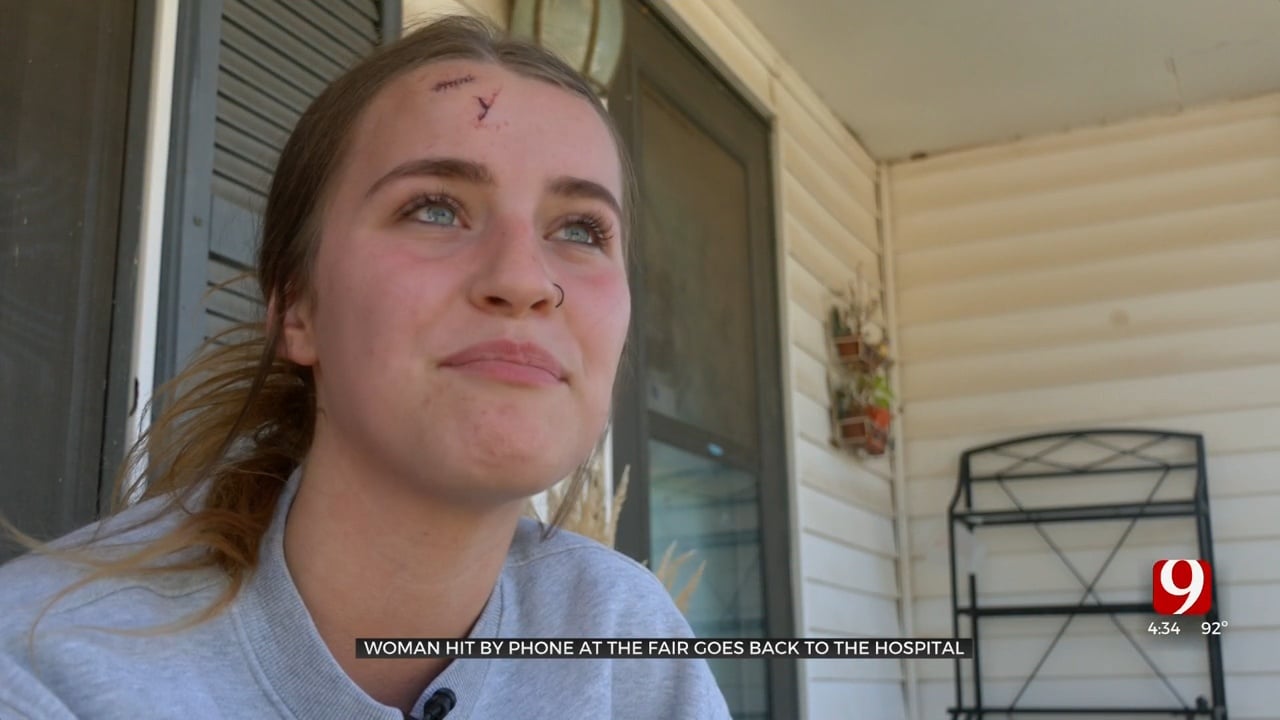 A trip to the Oklahoma State Fair has now led to two emergency room visits for one woman.

News 9 spoke Wednesday with Rebecca Gillespie after she was hit in the head by a cell phone that fell from the Street Fighter 360 ride. The injury landed her back in a hospital bed by Friday.

After the phone hit Gillespie Tuesday. she was checked, treated and released by doctors. Their diagnosis was a concussion and told her to take it easy.

“I had to get seven stitches,” Gillespie said Wednesday.

Gillespie was at home recovering after she was in the wrong place at the wrong time.

"The phone came out of the air and hit me in the face," Gillespie said Wednesday. "I have to go back for a follow up, and they will see how it's doing because it was very deep."

Just hours after News 9 spoke with her Wednesday, Gillespie lost the ability to talk herself.

Someone close to her told News 9 Gillespie began to talk gibberish, and her family rushed back to the emergency room.

"[Head injuries] sometimes don't have a lot of symptoms but as that inflammation, that kind of agitation of the brain happens, you can start to have vomiting or headaches or a lot of other serious symptoms sometimes,” Oklahoma Children's Hospital emergency room Dr. Vamsikrishna Kaliki said.

Dr. Kaliki said the phone’s shape and its makeup, coupled with the velocity from the approximately 70-foot fall, increased the likelihood of serious damage.

"They're usually made of metal, like pretty substantial materials,” Dr. Kaliki said. “That hard point of pressure in that small region can cause anything from a big bruise on your head, a laceration a big cut to your scalp all the way up to it can damage the skull, if it's traveling fast enough and it hits the right spot."

That material embedded itself into Gillespie's head.

"It's scary. It was bigger and there was more than just this one," Gillespie said Wednesday.

Her brain had some swelling after she was hit with the phone. Ultimately, she was diagnosed with a traumatic brain injury.

"We can see very minor symptoms all the way up to a skull fracture, maybe even leading into injuries inside the brain, as well," said Dr. Kaliki.

Dr. Kaliki said Gillespie's family did exactly what they should have when they immediately get her back in front of doctors.

If anyone has thrown up, gotten have severe headaches or can't talk after they've hit their head, Dr. Kaliki suggests that person should go see a doctor.