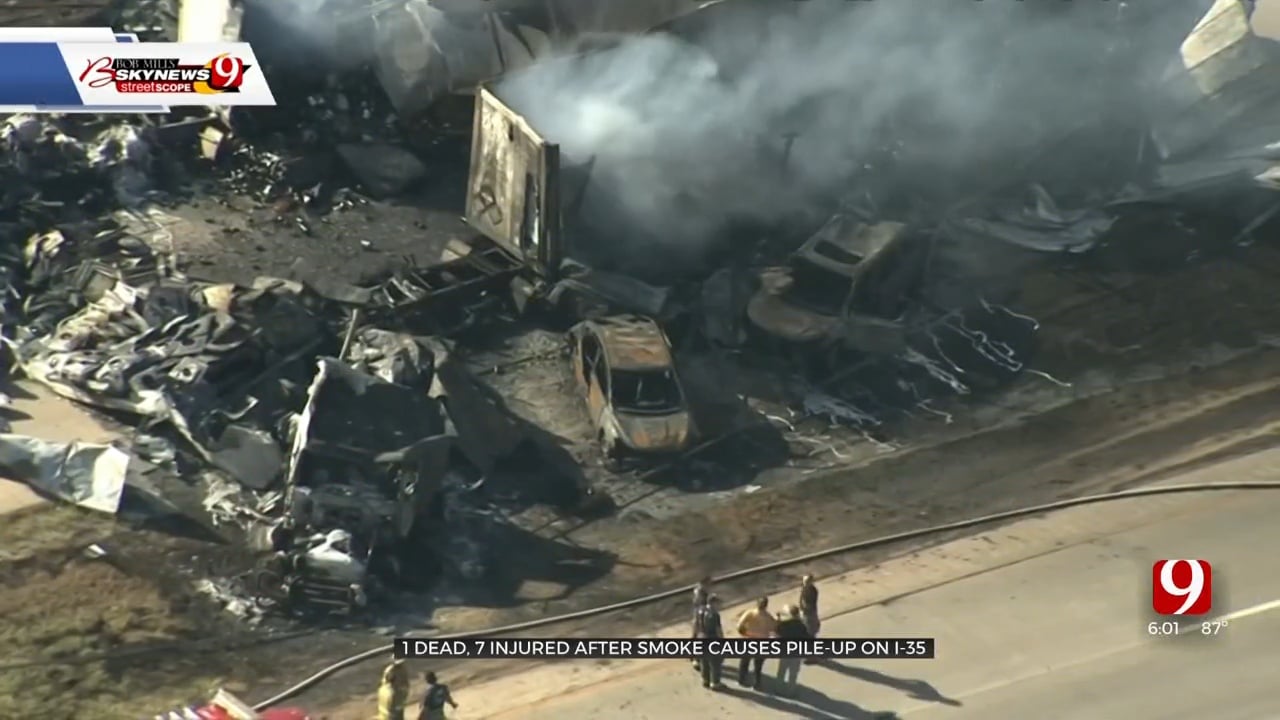 One person is dead and seven others were injured in a massive pile up on I-35 Tuesday.

The crash happened on I-35 near the Billings exit.

The Oklahoma Highway Patrol said a heavy blanket of smoke from a grass fire caused the chain reaction.

Now, the smoke has cleared but the southbound lanes of I-35 are seared and scarred.

OHP hadn’t even heard reports of the grass fire before they got a call about a crash.

"So, it happened fairly quickly from the fire starting to visibility being nothing," said Trooper Foster. "But it did approach the roadway the wind was blowing it to the roadway, and you can tell it wasn't very long where the origination point was, and the crash was. The fire wasn't burning for very long.”

The pile up started when a semi-truck driver decided to pull to the side of the road due to the low visibility.

"When other cars started to impact him in the back. Another semi hit that pile which caused the first semi to be broad in the roadway blocking all lanes, shoulders on the highway and at this point it was in the middle of the smoke," said Foster.

Eight vehicles ended up in the wreckage.

"All of the vehicles involved except one or two caught fire and completely burned up," said Trooper Foster. "When that fire burns like that with fuel, with rubber, all those things it burns so hot that it's hard to even approach it.”

One person died at the scene. It's not clear if it's from the crash or fire. Seven others have a mix of crash and burn injuries, two are in critical condition.

"We landed several helicopters to Medi-flight people out and there were between nine and twelve ambulances that came from all across those counties," said Trooper Foster.

Trooper Foster stressed that drivers need to get off the road when smoke from grass fires make conditions dangerous.