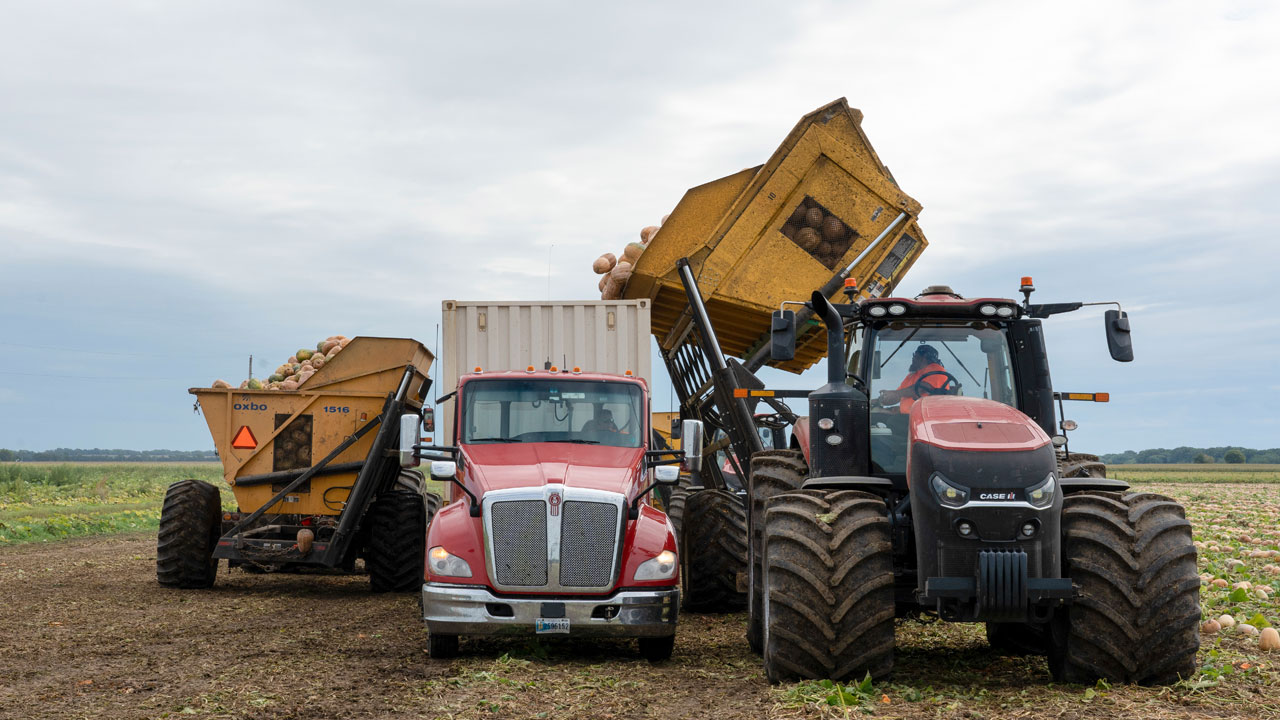 This Thanksgiving, your pumpkin pie might have a lower carbon footprint.

On the central Illinois farms that supply most of the world’s canned pumpkin, farmers are adopting regenerative techniques designed to reduce emissions, attract natural pollinators like bees and butterflies and improve the health of the soil.

The effort is backed by Libby’s, the 150-year-old canned food company, which processes 120,000 tons of pumpkins each year — or about 85% of the world’s total canned pumpkin — from these Illinois fields.

Libby’s parent, the Swiss conglomerate Nestle, is one of a growing number of big food companies supporting the transition to regenerative farming in the U.S., with the goal of letting soil thrive by reducing plowing and keeping bugs, carbon and other nutrients in the ground. Other regenerative farming practices include rotating crops or using fewer synthetic chemicals and fertilizers that can degrade soil over time.

Regenerative farming has its roots in indigenous cultures, including Hopi tribe members who still make use of ancient water preservation methods in Arizona. It’s not organic farming, which has stricter rules and certification, and it goes further than sustainable farming by seeking to improve the land rather than just preserve it, said Rachelle Malin, an environmental specialist with Nestle.

“We’re learning more and we really want to go beyond,” said Malin as she stood near rows of tangled green vines and yellowish pumpkins on a recent September morning. “How can we build back some things we may have already lost in some previous practices?”

In 2019, General Mills set a goal of adopting regenerative practices on 1 million acres of farmland by 2030; so far, the company says 225,000 acres have enrolled in its programs, including one that pays farmers for credits they earn when they increase soil carbon or improve water quality.

Last year, PepsiCo set a goal of transitioning 7 million acres of farmland to regenerative agriculture by 2030. And Walmart has said it will directly support 30,000 Midwest farmers in their transition to regenerative farming by 2030.

Arohi Sharma, deputy director of the regenerative agriculture program at the Natural Resources Defense Council, an environmental group, said food companies see the extreme temperatures and drought that result from climate change and know they must act. The agricultural sector is responsible for 11% of U.S. greenhouse gas emissions, nearly as much as residential and commercial buildings, according to the Environmental Protection Agency.

“They finally realize that they can no longer ignore the climate impacts of their supply chain,” Sharma said.

The U.S. Department of Agriculture is also supporting the transition. In mid-September, the agency announced it would invest up to $2.8 billion in 70 projects around the U.S. that will measure and verify the greenhouse gas benefits of regenerative farming.

The USDA said a growing body of research shows that regenerative farming can mitigate climate change and help soil regain its fertility and resiliency. A study released earlier this year by the University of Washington showed that soil on farms that had practiced regenerative methods for at least five years contained twice as much carbon as soil on neighboring conventional farms, and the food grown on them was richer in vitamins and minerals.

But farmers need financial support to make the transition, the USDA said, because it can take three to five years of trial and error and upfront expenses before they begin to see a payoff.

No one keeps track of the number of U.S. farms using regenerative farming techniques. Like organic farming — which makes up less than 1% of U.S. farmland — regenerative acres are still vastly outnumbered by conventional ones.

Libby’s began its regenerative agriculture program in 2021 with the 38 Illinois farms that grow its pumpkins on 6,000 acres. The program is part of an effort to meet Nestle’s larger goal of sourcing 50% of its key ingredients through regenerative methods by 2030.

Bill Sahs, who grows pumpkins for Libby’s in Atlanta, Illinois, has been farming for 47 years. He joined the regenerative farming program in 2021, and now works with scientists from Nestle and EcoPractices — an environmental consulting firm — to test his soil and try new methods.

Sahs used to plow his 200 acres of pumpkin fields, rake them over with a till, apply chemicals, plow them again and then plant them. Now, he works the ground just once before planting, which keeps carbon and other nutrients in the soil and makes it less susceptible to wind erosion. It also cuts emissions, he said.

“We’re not making as many trips with the tractors and equipment and diesel fuel,” he said.

Sahs has let some strips of land on his property go natural, with wildflowers and milkweed to attract pollinators and soak in runoff water from his fields. Nestle brings in beehives to help pollinate his plants throughout the growing season so he can rely less on synthetic fertilizers.

Nestle calculates that Sahs saved 119 tons of soil from erosion in 2021. His yields were lower than past years — he won’t say how much lower — but he said he still makes a good profit, in part because his fuel and fertilizer costs are lower.

“Everybody’s getting into the environmental act, and you’ve just got to change,” Sahs said. “If you can’t change, then you won’t be around very long.”

Research bears out Sahs’ experience. A 2018 study by South Dakota State University and the Ecdysis Foundation — a nonprofit research group — found that corn production was 29% lower on regenerative farms than conventional ones but profits were 78% higher because of reduced tilling, lower fertilizer and pesticide use and lower water costs.

Nestle is providing financial support to farmers like Sahs in addition to funding the partnership with EcoPractices. Nestle won’t say how much it is spending annually but it’s confident that over time, regenerative practices will lead to better environmental and financial outcomes for its farmers.

“The benefit that we see is the impact we can have on the environment and on the communities where these farmers live,” said Emily Johannes, Nestle’s senior manager of sustainable sourcing. “It returns in so many ways.”