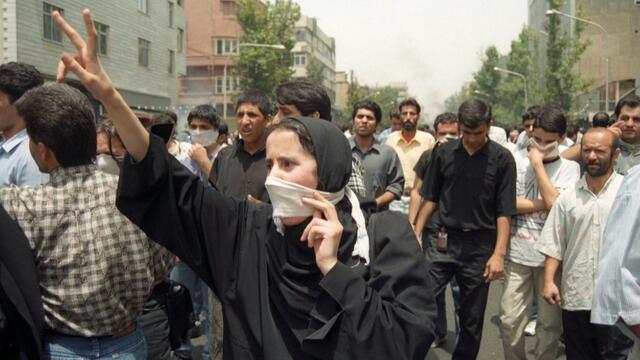 Anti-government protests have entered their third week in Iran despite severe internet restrictions and a heavy crackdown that human rights groups said has killed dozens.

Videos posted on social media appeared to show protests in cities across Iran on Friday night and Saturday, with students at several universities shouting chants such as "Death to the dictator!"

Other forms of civil disobedience, such as residents chanting from rooftops, drivers honking their horns in unison, and public figures speaking out for the demonstrators have emerged.

On Saturday, demonstrations were taking place worldwide, including in Rome, London, Frankfurt and Seoul, in solidarity.

The protests were triggered by the Sept. 16 death of Mahsa Amini, a 22-year-old woman detained for allegedly not covering her hair properly. She later died in the custody of Iran's morality police.

While it is difficult to gauge the extent of the protests given the severe internet restrictions in Iran, Hadi Ghaemi, director of the Center for Human Rights in Iran, an independent organization based in New York, said the protests are "certainly continuing."

He pointed to a "bloodbath" on Friday in the southeast Iranian city of Zahedan, where at least 19 people were reportedly killed after a standoff between protesters and police. He said the protests were directly related to Amini and the rape of a 15-year-old by a police commander.

As in the earlier days of the protests, recent videos show that many of the demonstrators are women.

They have led and marched in the demonstrations, and in defiance of the Islamic regime's strict morality laws, have cut their hair in public and danced with their exposed locks flowing.

"We keep receiving a lot of videos that show women are fearless," said Masih Alinejad, an Iranian journalist and activist who fled Iran in 2009 and is now based in New York. "They're walking fearlessly toward the security forces. It seems that this time people made up their mind. They say that enough is enough, we are fed up with the Islamic Republic, and we want to get rid of it."

These days, Alinejad spends day and night posting images of the protests and other acts of defiance on social media for her millions of followers. The Iranian regime made it a crime for Iranians to send videos to her. It has also made her a target, even in New York City, where she spoke to CBS News from an FBI safehouse. But she said she's not afraid.

"My true leaders are these women and men inside Iran," she said. "I don't do anything, just using my freedom in the U.S., echoing their voice."

In recent years, women in Iran have taken part in other nationwide protests. But this time, the spark was the death of a woman, and a female journalist - Niloufar Hamedi of Shargh daily - broke the story. She was arrested and placed in solitary confinement in Tehran's notorious Evin Prison.

Hamedi is one of at least 19 journalists — including seven women — detained across the country since the protests began, according to Reporters Without Borders. (The Center for Human Rights in Iran puts the figure at 25 or higher.)

"This is the first time that women in a large number, standing shoulder to shoulder with men, are burning their headscarves," said Alinjead, who runs an online campaign called "My Stealthy Freedom," sharing images of girls and women in Iran flouting the hijab rules. "[The hijab] is the main pillar of the Islamic Republic, so they strongly believe that by burning headscarves, they're actually shaking the regime."

In the decades before the 1979 Islamic Revolution, women in the streets of Iran dressed in both the hijab and the latest Western fashions. But soon after the revolution, the new Islamic regime ruled that women — and girls from a young age — had to cover their hair and bodies in public. Hardliners proclaimed the hijab would protect women's honor, but for many protesters, it is a symbol of oppression.

Women who have been demonstrating want to have the choice of whether or not to wear the hijab, according to Azadeh Pourzand, co-founder of the US-based Siamak Pourzand Foundation, promoting the freedom of expression in Iran.

"It's about essentially women feeling humiliated and women feeling forced to do something that they may or may not want to do," said Pourzand, who is also a PhD researcher at the University of London focusing on women's activism in Iran.

While Iranian women have pushed for legal reforms for years, very little has been achieved, she said. Women are present in society, particularly in higher education, but family and employment laws remain deeply discriminatory toward women, as do norms and practices, she said.

Still, Pourzand pointed out that the protests have united Iranians across different ages, ethnicities and cities. Demonstrators are calling not only for women's rights but they are also protesting political repression, corruption, Iran's battered economy and a climate crisis stemming from mismanagement.

Alinejad wants western countries to cut their ties with the Islamic Republic of Iran and "to recognize … the Iranian uprising."

Young Iranians demonstrating in the streets believe "history will judge those democratic countries who can help us but decided to help our murderers," she said, adding, "They're saying, … 'We are ready to die for the future of Iran, for having a better country to live.'"

A teacher who spoke to CBS News on condition that her name not be used said she has taken her daughter to protests twice in Tehran.

"For 43 years, we have lived and slept in fear, so much that we became accustomed to it," she said. "But now we are no longer afraid."