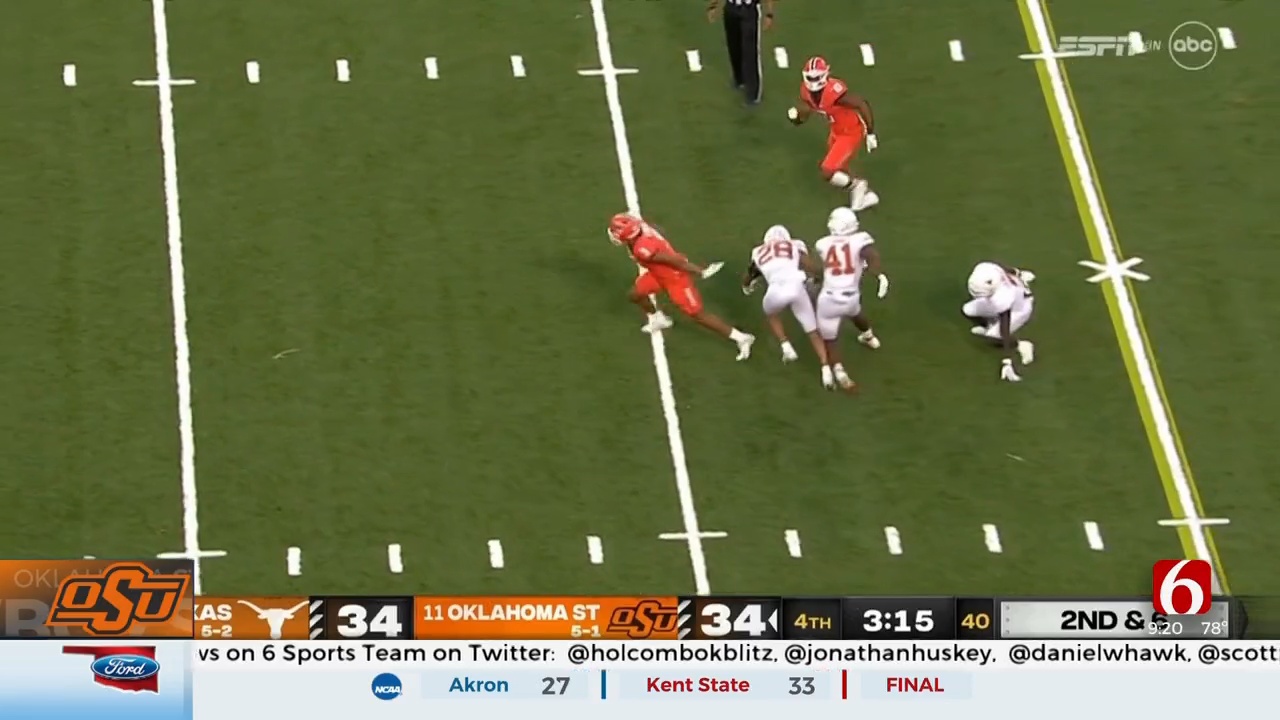 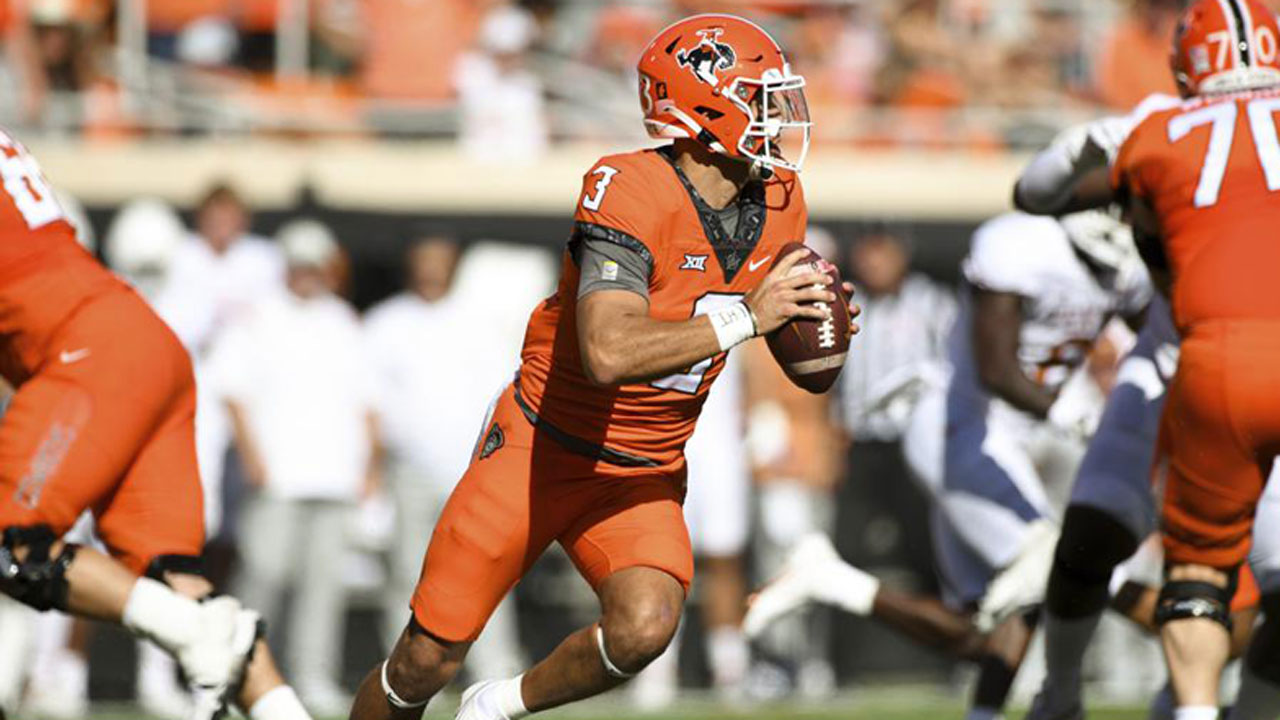 Oklahoma State hosted the Texas Longhorns Saturday in Stillwater, looking to bounce back after a tough loss to TCU in double overtime.

OSU has had a fair amount of success against the Longhorns since Colt McCoy’s departure, winning eight of the last 12 since losing 41-14 in 2009.

The Big 12 race is wide open, and the result of this game is one of the many dominos that must fall in order decide who plays in Arlington this December.

Texas took Alabama to the brink of defeat and barely lost to Texas Tech with its backup quarterback and Oklahoma State is playing its only home game in the middle of a tough stretch that includes trips to Manhattan and Lawrence over the next two weeks.

The winner of this game would in great position to play for a conference title and through three quarters, it looked like freshman phenom Quinn Ewers would lead Texas to the win, but the OSU defense had different plans.

The Cowboys defense only allowed three points in the second half and forced two turnovers as Spencer Sanders and the offense scored two fourth quarter touchdowns to seal a comeback victory, 41-34, in Stillwater.

Cowboys fans, this is one you won’t want to forget any time soon.

In a game that lasted nearly four hours, Oklahoma State did not commit one penalty.

On the other sideline, Steve Sarkisian was fuming after Texas committed penalty after penalty, many leading to touchdowns for the Cowboys. By games end, the Longhorns were penalized 14 times for 119 total yards. Pair that with three Texas turnovers and you have a recipe for disaster.

Going without a penalty is an obvious example of discipline, but it’s even more impressive how the Cowboys responded to the refs calls that went against them.

Early in the first quarter after exchanging a pair of touchdowns, the Cowboys stopped Texas and forced a punt. Presley was back to receive the punt and, on a windy day, let the punt hit the ground.

Texas recovered, the refs said the ball was live because it hit Presley’s leg and the call on the field was Texas ball. After a long review, the refs let the play on the field stand.

You be the judge of that call.

Texas had the ball on the OSU side of the field and instead of backing down, the Cowboys defense forced a three-and-out, giving up no points off the turnover.

Another instance that put the Cowboys discipline on display was an overturned targeting call in the second quarter. Texas defensive back Anthony Cook was called for targeting after hitting Spencer Sanders while he was sliding. The hit looked bad, and similar to the one that knocked OU’s Dillion Gabriel out against TCU a few weeks ago, but the refs overturned the call, keeping Cook in the game but still assessing the penalty.

The Cowboys didn't let it phase them and they went on to score a touchdown and make it a four-point game.

Early on, in a game that the Cowboys were losing, these were moments that weak teams may not come back from but in both situations, OSU recalibrated and kept themselves in the game.

Second Takeaway: By Air Or By Ground

Sanders attempted 57 passes on Saturday, the most this season and he threw for 391 yards, the most since the opener against Central Michigan. The redzone interception in the first half didn’t slow him down and it didn’t take away Gundy’s confidence in him. At the end of the game, Sanders was precise and in control.

On a twelve-play drive that ended with a touchdown to tie the game in the fourth quarter, Sanders completed passes to four different receivers and he ran for 16 yards to get to inside the Texas 20-yard line.

It was on this drive we saw Sanders at his best this season.

In the first half, it was the run game that kept the Cowboys in the fight.

It wasn’t dominant by any stretch of the imagination, but it was creative and consistent enough.

Richardson scored all the touchdowns for OSU in the first half, bowling over defenders inside the five-yard line. He finished with 13 carries, 24 yards and three touchdowns. He was out much of the second half.

The emergence of freshman running back Nixon is a major boost for the Cowboys. His change-of-pace running style compared to Richardson adds a dynamic the Cowboys offense hasn’t had from the backfield this season.

He finished with a season high in carries and yards, eight and 64. He was running out of his cleats and averaged eight yards per carry.

This kept Sanders from running as often, which might still be too many runs for Cowboys fans. Sanders didn’t use his legs to get in the endzone because he didn’t have to on Saturday. He tallied 43 yards on 11 carries.

On the outside, receiver Bryson Green came up big again for the second straight week, solidifying himself as the Cowboys deep threat that Sanders can rely on to make a contested catch. He averaged 26.6 yards per catch on five receptions with 133 yards and this touchdown.

Head Coach Mike Gundy knows he has the weapons to attack the defense through the air or on the ground and on Saturday, it proved worthwhile.

Sanders only threw one interception on 57 attempts, give the young man some well-deserved credit.

Third Takeaway: Next Man Up

Oklahoma State came into Saturday’s game against the Longhorns with an extensive injury report.

Multiple starters and key contributors were out on both sides of the ball for the Cowboys, but it didn’t make a difference.

On top of those key losses, Sanders came into the game with minimal practice as he recovers from a shoulder injury and starting running back Richardson was dinged up in the first half.

Starting safety Jason Taylor also appeared to suffer a leg injury late in the game, too.

This combination of new starters probably contributed to the slow start for the Cowboys offense and defense, but at the end of the day, the Cowboys were able to outlast the Longhorns to remain a contender for the Big 12 championship.

Key players that stepped up and filled the gap for Oklahoma State include Jason Taylor, who recorded two interceptions, true freshman Stephon Johnson who filled in for Braydon Johnson, Mason Cobb and veteran Sean Michael Flanagan.

That early bye week could come back to bite the Cowboys as the second half of the season continues and the injuries pile up.

There were a lot of Texas believers out there before Saturday’s matchup. Even at home, the Cowboys were 6.5-point underdogs at most major sportsbooks. But the hype for Texas and Ewers, whose only losses came when he was injured, is dead, and the Cowboys deserve credit for that.

Ewers finished with an abysmal 59.3 QBR, completing 19/49 passes for 319 yards, two touchdowns and three interceptions. It was Ewers first true road game since high school, and Stillwater was no match for him. It’s not time to close the book on Ewers, but it’s clear he’s not one of the top QBs in the nation at this moment.

Next week, the Cowboys travel to Manhattan, Kansas to take on Kansas State.