Bedlam Winding Down As Oklahoma State, Oklahoma Square Off 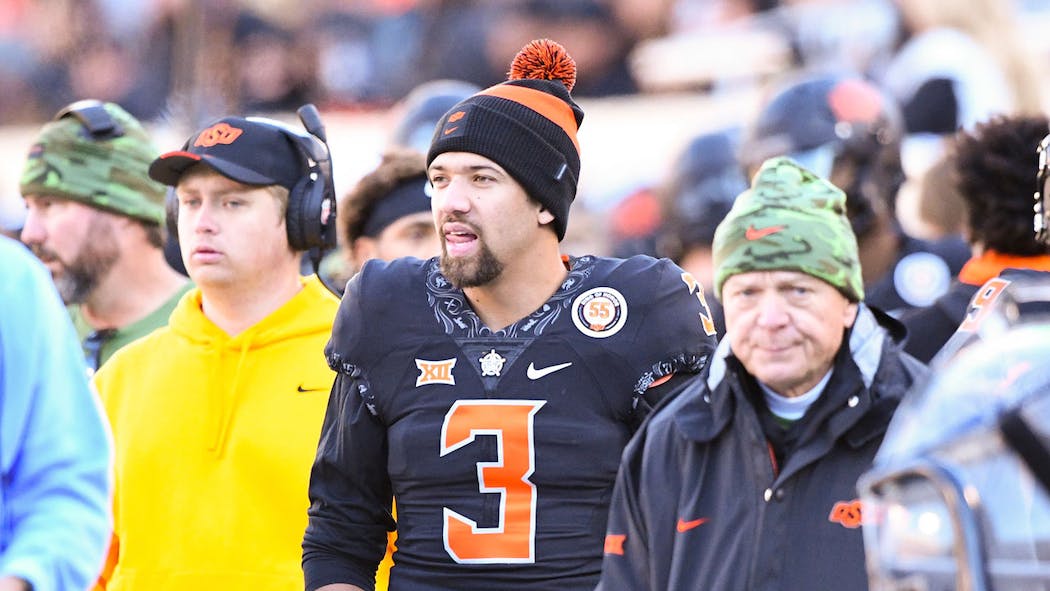 Bedlam won’t be quite the high-stakes showdown many expected at the start of the season, but plenty still will be on the line when No. 24 Oklahoma State visits Oklahoma on Saturday night.

Both began the season with College Football Playoff aspirations and top 12 rankings. Both slipped after their quarterbacks were knocked out of action. But Oklahoma State (7-3, 4-3 Big 12) still could reach the conference title game with a win, and Oklahoma can become bowl eligible with a victory.

And then, there’s the history. This matchup will be one of the last ones between the rivals before Oklahoma (5-5, 2-5) leaves the Big 12 for the Southeastern Conference by 2025.

“It’s been talked about a little bit, so our guys are certainly aware that we only may play a couple of more times,” Oklahoma coach Brent Venables said. “But I do think that (the players will have) the juice and the edge and understanding what’s at stake here in this state.”

The fact that the series is winding down has only added fuel.

“We don’t like those guys and they don’t like us,” Oklahoma State defensive end Kody Walterscheid said. “There’s still 100% a rivalry.”

Oklahoma has a 23-season bowl streak, second longest in the nation. An Oklahoma State win would put the Sooners in a must-win situation the following week at Texas Tech.

Oklahoma State quarterback Spencer Sanders has been fighting through a shoulder injury. He stepped in and rallied the Cowboys past Iowa State last week, and he said he expects to start on Saturday. He leads the Big 12 in total offense and has 16 passing touchdowns and eight rushing scores.

“He’s got a lot of moxie,” Venables said. “You can tell he’s played a lot of football. The team rallies behind him, plays off his leadership and his energy. Sometimes, the worst thing you can do is cover everybody because he can really run. He’s a true dual-threat guy.”

Despite coming off three-point losses to Baylor and West Virginia, Oklahoma is favored according to FanDuel Sportsbook. Venables said none of the numbers matter.

“It’s going to be a great challenge,” Venables said. “This game — you never know how it’s going to go. Throw the records out, as we all know.”

Oklahoma will need to protect quarterback Dillon Gabriel from Oklahoma State’s defensive line, which ranks among the best in the Big 12. Collin Oliver leads the way with five sacks.

“These guys do an unbelievable job of getting off of blocks, not staying blocked and getting to the football,” Oklahoma offensive coordinator Jeff Lebby said. “And so when you see that on tape, you understand exactly what the game is going to be like on Saturday. These guys are going to play tough. They’re going to play hard. They don’t stay blocked. So we’ve got to match and surpass that effort.”

Oklahoma’s Eric Gray ranks third in the Big 12 with 1,113 yards rushing this season, and his 6.7 yards per carry lead the conference and rank sixth nationally.

Oklahoma State will be focused on him.

“I think if we can stop the run and make them have to throw the ball, they’ll end up making some mistakes and we’ll hopefully be able to capitalize and take advantage of some opportunities there,” Martin said.

Coach Gundy, a former quarterback, said Gunnar will be fine.

“He made some plays, but there’s a couple of times he could’ve progressed a little bit further in his reads. ... I’ve been there and when you’re young and there is pressure on you, your reads go faster and you don’t see things like you should.”

Mike Gundy, on Sanders saying he expects to start: “That’s awesome that he feels better. I hope that that’s his decision and that’s the way he feels. ... That’s good news though if he feels like that so we can get him in there and let him play.”

Bedlam Winding Down As Oklahoma State, Oklahoma Square Off