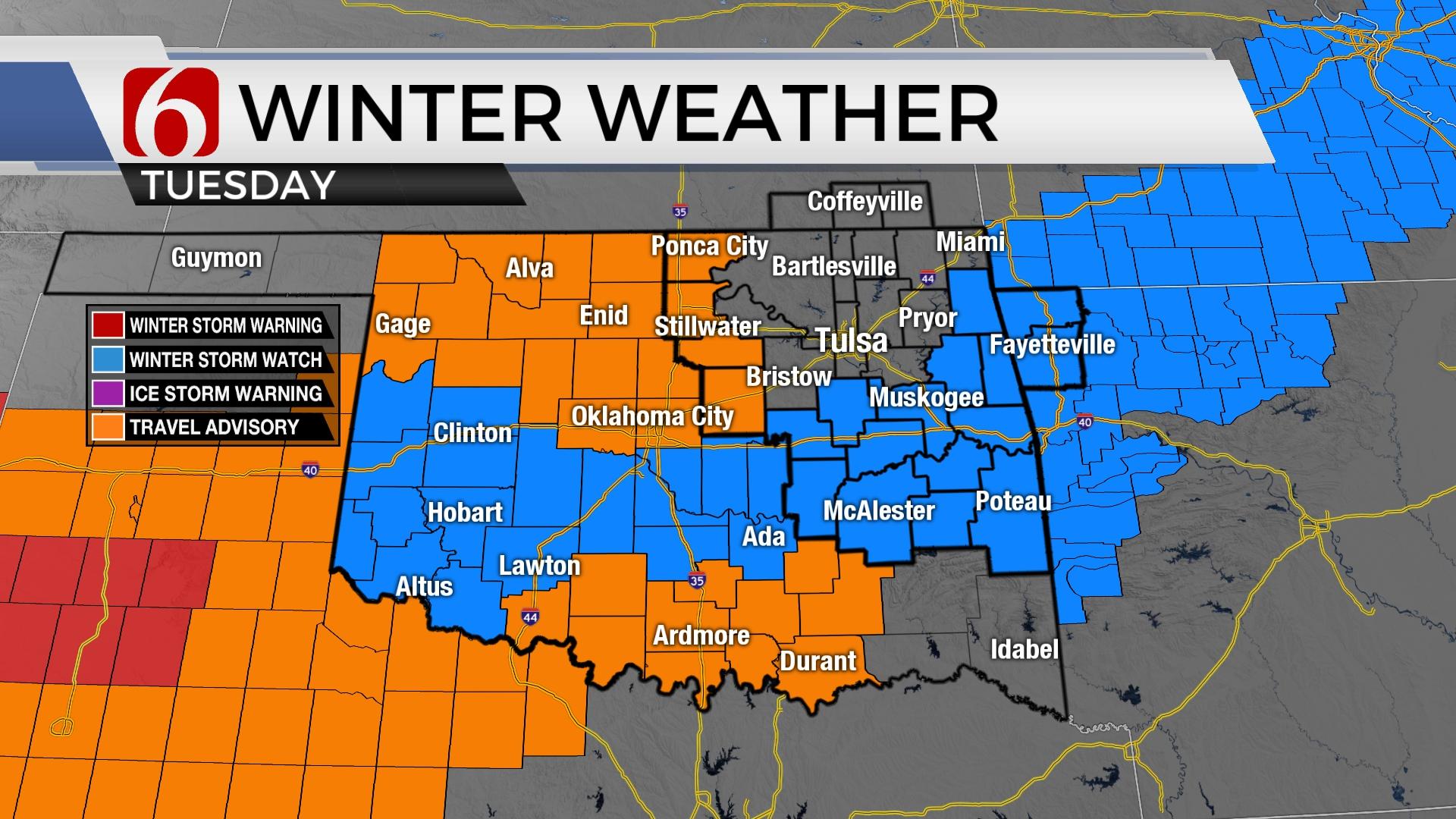 TULSA, Okla. - Winter weather could soon be on the way for parts of Green Country. Afternoon highs will reach the upper 40s and lower 50s on Monday with sunshine and mostly light winds from 5 to 10 mph. A strong upper-level storm system brings rain changing to snow Tuesday, including the potential for accumulating snow in some locations. Winter storm watches are posted along both sides of I-40 with some winter weather (travel advisories) in other locations. The main upper-level low of interest is currently located across the southern California region and will quickly move east into west Texas near El Paso Monday night and into northern Arkansas and southern Missouri by Wednesday morning. A surface low is expected to develop across far southwest Texas later tonight and lift northeast into eastern Arkansas and western Tennessee by early Wednesday morning. The track of these features will bring rain and snow northward across Texas and Oklahoma Tuesday and exiting early Wednesday. The exact track of the features will determine where the heaviest rain to snow conversion occurs. The current data support rain quickly changing to snow across southwestern OK early Tuesday morning and moving northeast across central and eastern sections of the state by afternoon. Initial thermal profiles across northeastern OK should support rain for the early part of Tuesday before colder air aloft moves across the area from the southwest to northeast. It’s this window from midday to early evening that rain will change to snow, including the potential for a significant swath of measurable accumulations, currently overlayed where the current winter weather watch is posted. The current trajectory places part of southeastern OK to east central sections extending into northwestern Arkansas as the corridor supporting 3 to 6 inches of snow or slightly higher amounts, especially in northwestern Arkansas where higher elevations support mentions nearing 8 inches. Locations slightly north of I-40, including the Tulsa metro, seem to be in a position for 1 to 3 inches of snow but will be fighting the potential for longer periods or rain before changing to snow. The longer the rain, the lower the snowfall amounts. Additional changes to the snowfall forecast are still possible with this system.

A winter storm watch is posted from southwestern OK northward along both sides of I-40 extending into east-central OK into northwestern Arkansas. A winter weather or travel advisory is currently posted for locations along I-35 from the OKC metro to the Kansas state line region. Another area of winter weather advisories are also in effect across far southcentral OK. The Tulsa metro is currently not included in either a winter storm watch or a winter weather advisory as of this blog post but may be included in advisories later this afternoon or tonight for the Tuesday system. The rest of the week seems rather uneventful with cold weather remaining until Friday, when afternoon highs will reach the mid-50s before another strong cold front rolls across the state Saturday night into early Sunday morning. This brings much colder weather and a small window for some wintry precipitation late Saturday evening into pre-dawn Sunday.