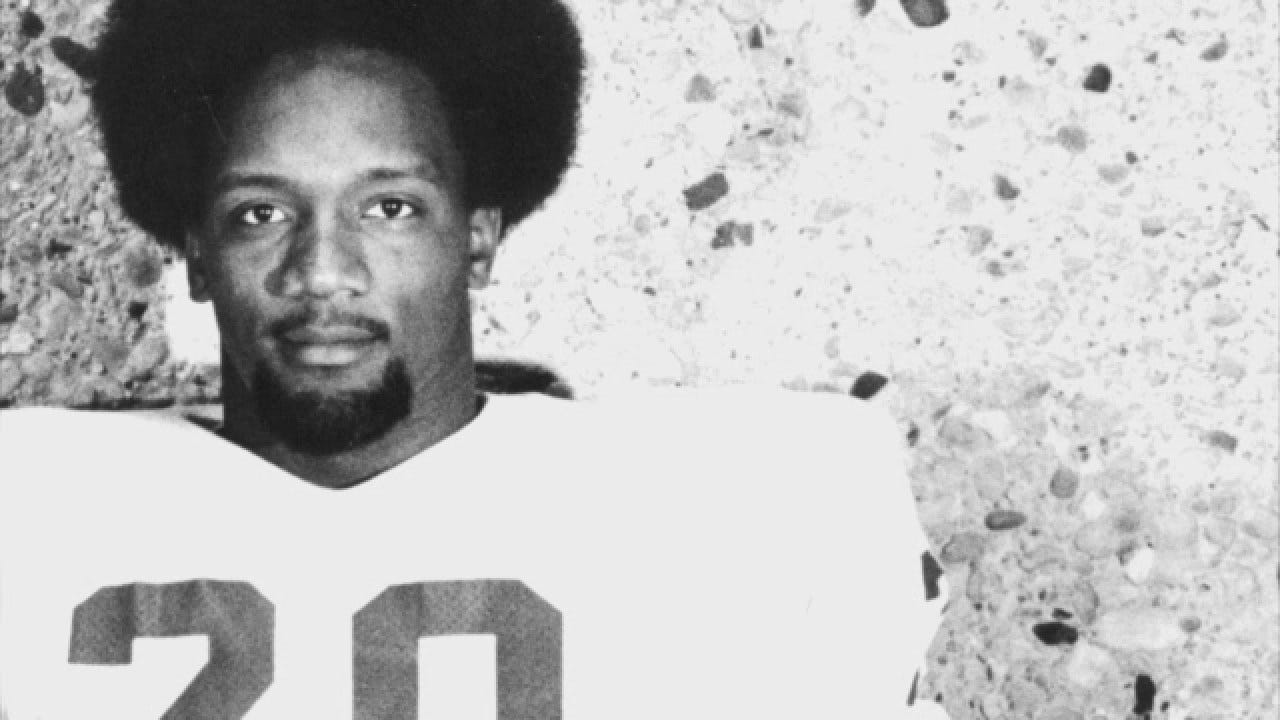 One of Coach Barry Switzer's most sought-after recruits was Billy Sims. In his 1978 Heisman winning season, Sims rushed for more than 1,700 yards and 20 touchdowns. However, it's more than just numbers for Coach and Billy, their bond on the sidelines led to a life-long relationship.

When Billy Ray Sims was in the 8th grade, he moved to tiny Hooks, Texas.

"Just your typical small town, the town revolves around the school and churches," said Patrick James, one of Billy's childhood friends.

And on Friday nights, the religion of high school football.

Sims didn't even play football till 10th grade, a linebacker before moving to running back.

"I was so afraid of getting hit when I played running back and I was just making people move you know, miss me and all that stuff and got pretty good at it," Sims said. "As I say, it was a whole lot of running and no blocking."

And when Hooks fans came out, it was a sight to see him play.

"Like a man playing with boys, he was just that much better than everybody," James said. "He didn't just outrun everybody, he just went around them or over them whatever it took."

"Ten thousand people would show up at a stadium that would hold two or three thousand," said James. "Everybody wanted to see something special and he definitely was."

Sims shattered longtime records as a senior in 1974, clearly the number one back in Texas if not the country. Recruiters from everywhere were hooked on Billy Sims.

"On Friday nights, every coach that was anybody would be in Hooks," he said. "I mean it's like the who's who of coaches showed up just to see this guy."

But Sims was Baylor bound until a now legendary phone call from Switzer during halftime of an important road game for unbeaten Oklahoma.

"I walked in the locker room at Colorado in 1974," recalls Switzer. "And I called the Conoco service station in Hooks, Texas, I-30."

"So, I'm listening to the game," said Sims. "One of my coworkers come out and say 'hey Billy, Coach Switzer wants to talk to ya, he's on the phone.'"

"I'll never forget CJ yelling 'Billy, coach wants to talk to you on the phone' he yelled back 'he's coaching the game in Colorado, no he isn't, he's on the phone, get up he doesn't have much time,' "said Switzer.

"I thought my coworker was playing a joke on me," said Sims.

"We talked for 20 minutes," said Switzer. "Referee says 'coach kick off is in three minutes, 'I said 'Billy you hear that we gotta go finish this ass kicking and I'll call you later on tonight.'"

When asked if he came to Oklahoma because of Barry Switzer, Sims said "Oh no question about it."

Highlighting a remarkable recruiting class of 1975, Billy committed to Barry, the beginning of a close lifetime relationship.

"We had guys that could just flat out play football," said Thomas Lott, former OU quarterback.

Lott was among Sims' recruiting class.

"I spent so many hours out on this football field and Saturdays were the good times," he said. "That was your reward."

Injuries kept Sims out of the starting lineup early, but he started in 77 and had a huge 1978.

"That was the year he was totally healthy and, everyone got to see the Billy Sims that they had heard about," Lott said. "He would do anything to try and get away from people."

"You gotta get the ball in Billy's hands because he'll make something good happen," Switzer said.

"I do remember when he first started the flying, and he was like five yards from the goal line and he went up in the air and flew for the other four and a half yards," said Lott. "That was pretty spectacular to see that happen."

"The fact that I was at the right place, right time with a great group of guys," said Sims.

Sims was the number one pick in the 1980 NFL draft by the Detroit Lions where he was reunited with fellow OU offensive tackle Karl Baldischwiler.

"Being an offensive lineman, made it really easy for me," Baldischwiler said. "We had to learn a technique for his speed, he was so fast and would get there so quickly. He had something that only came through in a game when everything meant something."

"Most everybody's career ends before they're ready," Baldischwiler said. "So, he had to kind of reevaluate his life and what he was gonna do with it."

"If you live long enough in life you're gonna have some ups and downs along the way," Sims said.

Those downs included several failed business ventures and an arrest for owing back child support.
The hard times leading Sims to sell a close friend his Heisman trophy.

"The funds and everything went to my kids for college see a lot of people don't realize that," he said.

"We're in about six, seven states now, we're still growing," Sims said. "Been very blessed to have a great supporting cast like in football."

His football roots still run deep as he's always supported Sooners, especially the ones who followed him down the same Heisman win path.

"When I get up there, Billy Sims is in the back yelling 'boomer,' which it kind of calmed me down a little bit," remembers Jason White, former OU quarterback who won the 2003 Heisman Trophy. "I thought 'how many times are you gonna say that' and finally I said, 'Sooner.'"

Boomer Sooner is more than a chant for Sims, it's become part of him since the day Coach Switzer recruited the Hooks headliner to the Sooner State.

"When you recruit 'em you got 'em for life," said Switzer jokingly.

"You know he told me when I came up here you know he said 'after the crowd and the cheering and your career's over with I'm gonna still be in your corner,'" said Sims. "He's been true to that. No regrets whatsoever, whatsoever."