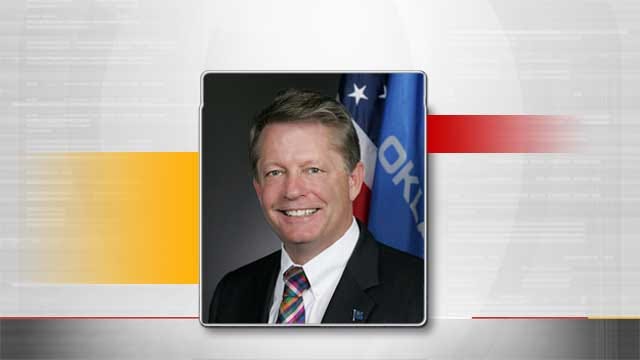 Oklahoma state leaders are in shock as one of their own was murdered allegedly by his own son.

Dozens of Braum's employees and customers witnessed the attack at the Braum's restaurant on May Avenue near Hefner just before 7 p.m. on Sunday. The suspect is the victim's own son, 26-year-old Christian Costello.

Oklahoma City police said Christian had an argument earlier in the day with his father, State Labor Commissioner Mark Costello. The two agreed to meet at the restaurant to work things out.

Witnesses told investigators that Mark Costello was stabbed inside the restaurant, and as he tried to leave, witnesses said Christian followed his father to the parking lot and stabbed his father in the back of the head with a steak knife.

According to police, Costello was stabbed at least four times.

According to witness Patrick Spencer, someone in the parking lot used their SUV to hit Christian to stop the attack.

Costello was transported to OU Medical Center but was pronounced dead. According to his bio on the state's website he has been married to his wife Cathy for 33 years and has five children.

His oldest son Christian is now in police custody.

“I was shocked and greatly saddened to hear of Labor Commissioner Mark Costello's tragic death last night. My prayers and deepest sympathies go out to his family, friends and staff. Oklahoma has lost a dedicated public servant and a good man.

In honor of Mark’s life and his service to the state, all flags on state property will be flown at half-staff through the end of the week.”

"My family is stunned and deeply grieved to hear of the tragic death of Labor Commissioner Mark Costello.  Mark was passionate about our nation, conservative fiscal principles, and the people of our state. Mark was a friend, and as we grieve, we will also pray for his family as they deal with this unbelievable tragedy."

"My wife and I are devastated by the loss of our friend, Mark Costello.  He was principled servant, deeply committed to his faith and to Oklahoma.  Our prayers are with Cathy and the Costello family."

"I am deeply saddened by the loss of my dear friend Mark Costello. He was a wonderful leader and public servant. This is a major loss to the state of Oklahoma and everyone who loved Mark. My thoughts and prayers go out to his beloved wife Cathy and their family."