Breaking Down Oklahoma Vs. Notre Dame 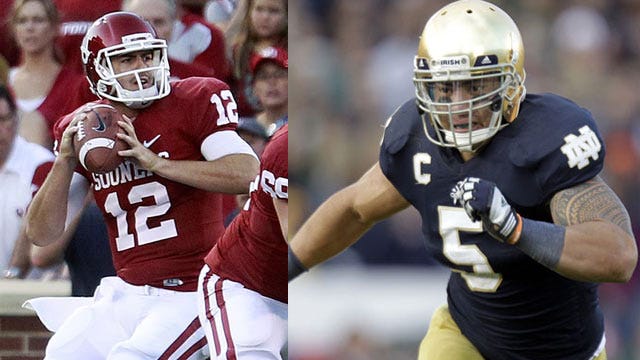 After weeks of buildup, the Oklahoma Sooners and Notre Dame Fighting Irish will finally take the field Saturday in the biggest game in Norman since undefeated No. 1 Nebraska came to town in 2000.

Everyone's going to be there. ESPN College Gameday has had several semis out on the South Oval this week dumping equipment and hordes of production workers on to the OU campus to set up the television extravaganza. Who knows how many national media folk will be roaming the sideline or crammed into the OU press box?

Ultimately, everyone is coming to Norman to see a football game, and what a football game it should be. The Irish, ranked No. 5 in the latest BCS standings, are in the midst of their most convincing ruse of a comeback since the 2002 unit started the season 8-0 under Tyrone Willingham.

The Sooners checked in at No. 8 and have just one loss to Kansas State, which looks better or worse each week, depending on which way you look at it, as the lone blemish on their record. As far as national championship contention goes, this game is as big as it gets.

As with any game, there are a couple key battles within the game that will decide how the game plays out.

For the Irish, their primary objective will be to put pressure on OU quarterback Landry Jones. Jones showed against Kansas State he still isn't the best when it comes to handling pressure in the pocket. However, he has improved in that area the past three weeks when pressure has come his way.

The Notre Dame defensive line is very big and very athletic. They've proven throughout the season so far they have the technique to get to the quarterback when they want to, and the football intelligence to make adjustments based on the offensive line schemes.

The Sooners offensive line handled a very athletic Texas defensive line extremely well, and they'll have to do the same thing Saturday to keep Jones' jersey spotless. If Jones has the time in the pocket to look through his projections, he should have no problem exploiting a very young and inexperienced Irish secondary.

For OU, besides keeping Jones well protected, the Sooners simply need to play sound, disciplined football on defense. Notre Dame has a great rushing attack, and quarterback Everett Golson can take a broken play and make something out of it fairly easily with his speed. However, he's not a very experienced quarterback yet, and still makes poor decisions from time to time. If OU can pressure him, and keep all the Irish skill players in front of them, they should have no problem holding the Notre Dame offense in check.

One thing is for certain in the game: the Notre Dame offense is not going to be able to march up and down the field against the OU defense consistently enough to beat the Sooners. They'll need a lot of help from their defense, whether that be through turnovers or simply keeping the OU offense out of the end zone.

With a win, OU head coach Bob Stoops would tie legendary coach Bud Wilkinson for second all-time in OU history with 145 wins. To do that against the team that snapped OU's record 47-game win streak in 1957 would just be fitting.

Games like these are good for college football. The pageantry, the atmosphere, it just simply can't be matched week in and week out by every school across the country. So savor this weekend, fans, because it doesn't happen every week.

Breaking Down Oklahoma Vs. Notre Dame