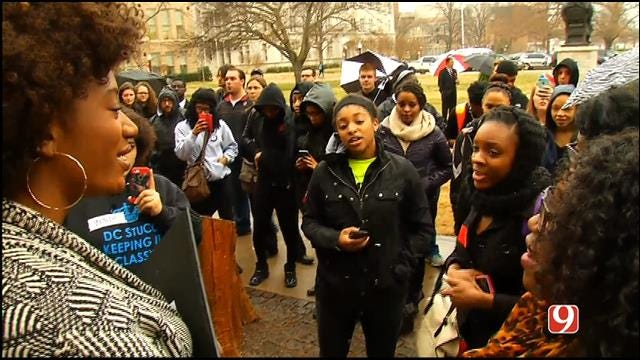 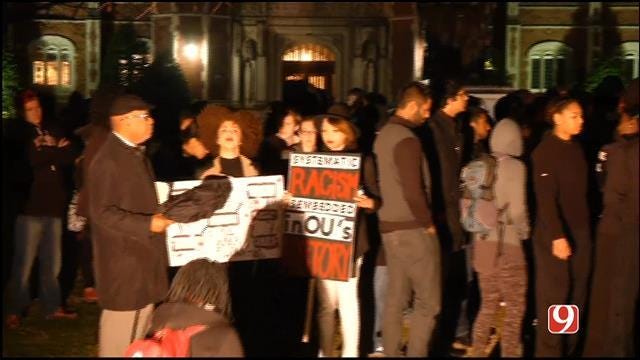 Students gathered at the University of Oklahoma campus Monday morning to protest against a video surfaced online showing members of an OU fraternity chanting racial slurs.

This story exploded overnight on social media. We know national news outlets are already planning to make it headline story. Here at home, a student group at OU gathered for a demonstration on campus.

Members of a group called "OU UNHEARD" met around midnight at OU. The group has put together a demonstration they said to show their outrage and disgust.

"If you watch the video, those chants were being chanted very passionately and we just wonder why would you have this much hatred in your heart for someone just based off the color of their skin," said Samuel Iroanya, "OU Unheard" Spokesman.

Nearly 200 protesters gathered at 7:30 a.m. on the OU campus at the North Oval. The group asked for participants to wear all black.

On social media thousands of people have offered their opinions about this whole thing. Many of them are using the hash tag "SAE HATES ME."

OU President David Boren will hold a press conference at 11 a.m. Monday on the steps of Evans Hall. President Boren will issue a statement regarding the incident with the local SAE chapter.

"To those who have misused their free speech in such a reprehensible way, I have a message for you. You are disgraceful. You have violated all that we stand for. You should not have the privilege of calling yourselves “Sooners.” Real Sooners believe in equal opportunity. Real Sooners treat all people with respect. Real Sooners love each other and take care of each other like family members.

Effective immediately, all ties and affiliations between the university and the local SAE chapter are hereby severed. I direct that the house be closed and that members will remove their personal belongings from the house by midnight tomorrow. Those needing to make special arrangements for positions shall contact the Dean of Students.

All of us will redouble our efforts to create the strongest sense of family and community. We vow that we will be an example to the entire country of how to deal with this issue. There must be a zero tolerance for racism everywhere in our nation."

Sigma Alpha Epsilon also issued the following statement regarding the situation via Twitter, "Sigma Alpha Epsilon is aware of the video and is both shocked and appalled at what we have seen. Those types of behaviors are not consistent with our values whatsoever. We are investigating the details and will sanction those who are responsible.”

Leadership at the Sigma Alpha Epsilon national headquarters is also looking into this incident, but just before 10:30 p.m. Sunday issued a press release saying that they will in fact close the SAE chapter at the University of Oklahoma.

News 9 and News9.com will keep you updates as more information becomes available.