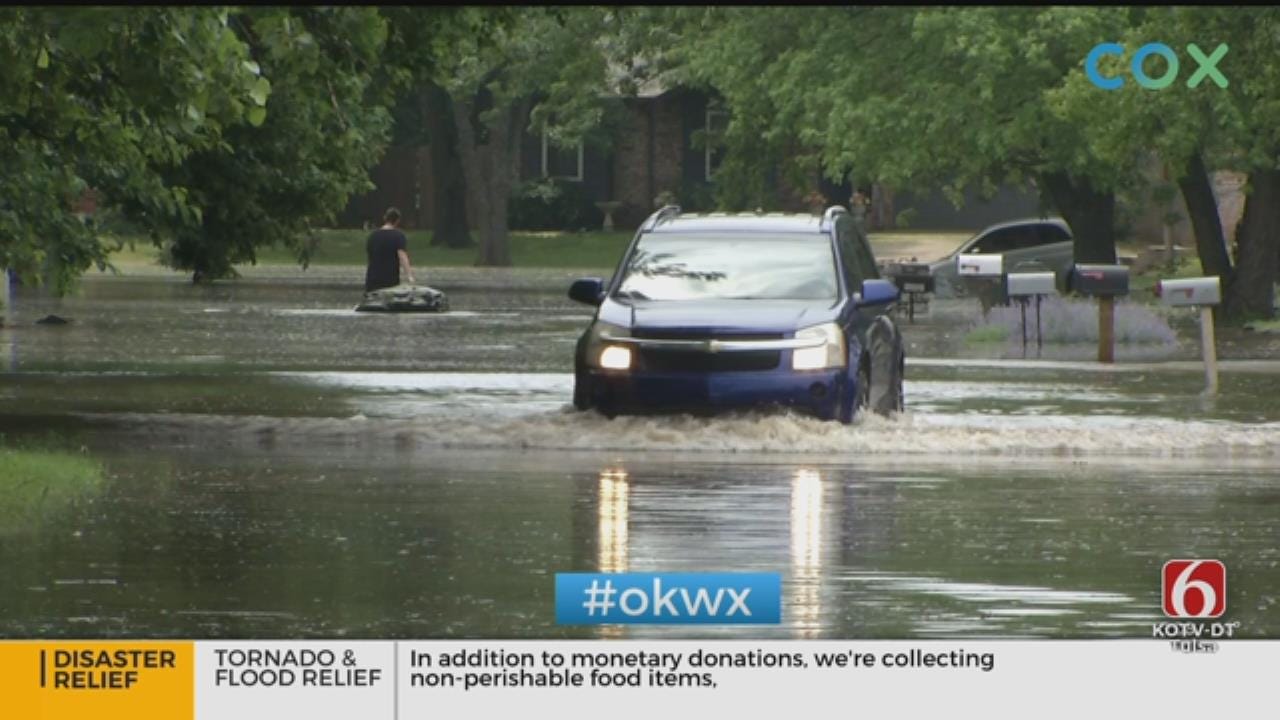 The flooding is affecting communities all along the Arkansas River, including Sand Springs. The community has several low-lying areas flooding now. Many other neighborhoods protected by the levee system are still dry.

Residents have cleared out of some areas, like a neighborhood near Highway 97 and Highway 51 that floods with water backed up in creeks.

The few people left were filling up moving vans and cars - moving out.

"We're going to have some losses, so that's what happens," said TuAnne Kelley, Meadow Valley resident.

Kelley was here in 1986 when the neighborhood was covered in deep water. She got water in her house that time and doesn't know what will happen this time.

Some people cleared out in pickups at the last possible moment, with the water almost too deep then. A few more were past that, with water up to the mailbox, and too deep to drive in.

Gage Green went in and out with a raft - to get a few last things.

"It's not good, man," he said. "We're just trying to save everything we can at this point. Everybody is hoping they don't lose their houses.

The water in the Arkansas is outside of its banks - up against the levee with room left - but the water is rising. Photos from Newblock park in Tulsa show how fast the water is moving. It's now up to the bottom of the railroad bridge.

Levees protect the refineries on the far side, but Holly is closing down as a precaution, and many of the industrial sites on the west bank were clearing out equipment and people.

The water is already higher against the levee than anytime since 1986 - and it's holding, with several more days to be tested against the high water - and the 1984 flood level marked where the water reached when the levees failed along Charles Page Boulevard.

In West Tulsa - the Sandy Park Apartments were cleared out and blocked off - some residents waited on the curb for a ride. In Sand Springs, Meadow Valley was evacuated as the water was rising.

"And let's say what it is - the levee is rocking - it's doing what it's supposed to be doing. So we're protected, but some folks like this, they're outside the protection of the levee, So we're focusing on keeping people out, working on public safety, keeping people out of the parks," said Grant Gerondale with the City of Sand Springs.

"Lookey lous please stay away, trying to make sure people don't do something that doesn't turn into something much worse."

The water will continue to rise as the Corps puts more water out from Keystone, so officials are urging people all along the Arkansas thru Tulsa County to leave now - not wait to see what happens because the water will rise downstream during the night.