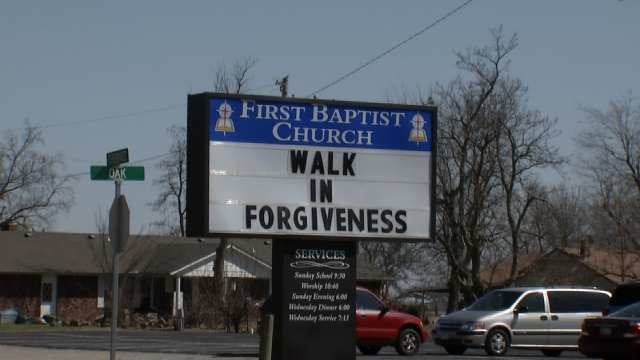 A woman sued a Talala First Baptist after a Sunday school teacher pleaded guilty to molesting her daughter. Timothy Gregston was sentenced to 10 years on probation after pleading guilty to three counts of lewd acts with a child under 16.

Susan Osburn is suing the church for an amount in excess of $75,000 in a law suit filed Tuesday, October 24, 2017. Osburn and her child were members of the Rogers County church, and Gregston was a volunteer in its youth services and programs, the lawsuit states.

The church is accused of putting him in a position of authorities and trust without properly investigating his background or providing adequate supervision. Osburn's lawsuit states that position gave Gregston the opportunity to pursue and groom the victim for sexual abuse.

Investigators said Gregston first contacted the then 12-year-old girl through Facebook then the relationship advanced to his touching and kissing her while at the church.

"Both incidents of him kissing her took place in a secluded area of the church in Talala," said Rogers County Sheriff's Office investigator, Gavin Gatrell.

They also said he had no criminal history.

Osburn also claims in the lawsuit that both she and her daughter suffered from the incidents and that the church created a "hostile atmosphere among its parishioners and the larger Talala community" by blaming Osburn and her daughter for the abuse.