A Break in the Heat & a Chance of Storms. 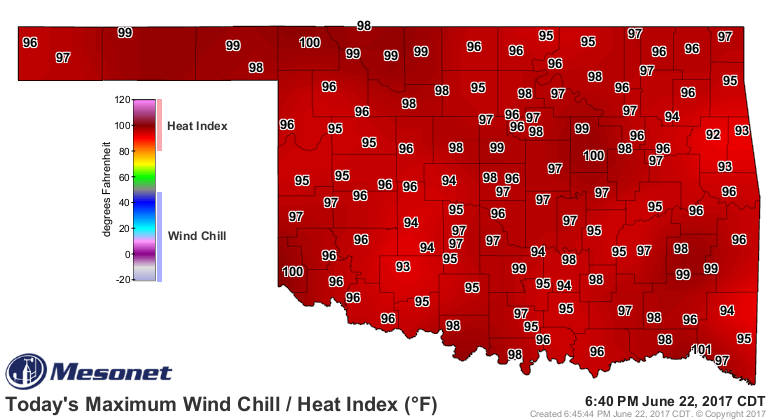 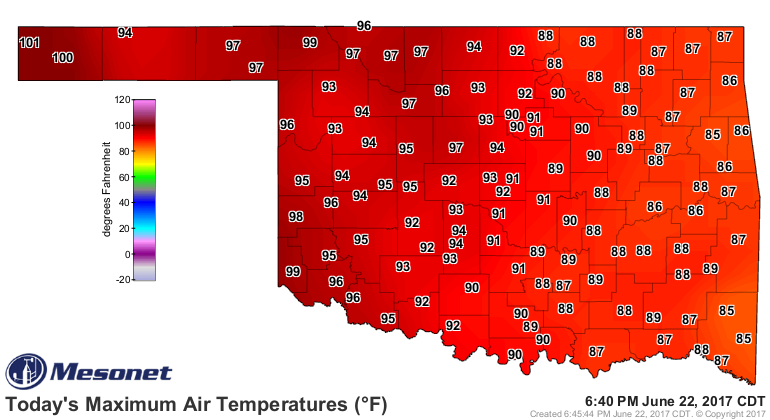 Although temperatures were actually at or below normal this afternoon, it certainly did not feel like it.  Notice the maximum heat index values were at or close to triple digits for many locations due to the combination of heat and humidity.

The actual air temperatures were, for the most part, in the upper 80s to near 90 so the humidity values certainly contributed to the discomfort this afternoon.  For Tulsa, the actual numbers were 89/68 along with a maximum heat index value of 95.  The relative humidity only dropped off to 63% at its lowest level this afternoon.  By the way, the normal max/min for Tulsa is 89/70 at this time of year so just a bit below normal.

That will all be changing in the days ahead as a rather strong cool front for this time of year will be moving across the state Friday morning and will be followed by cooler, drier air for the weekend and into the first part of next week.  It will also bring with it a good chance of showers/storms but the steadily progressive nature of the shower activity will likely limit the rainfall totals.  As you can see on the QPF through the day Saturday, the heavier rains will be much further east due to the remnants of Cindy as it moves off to the NE.   Since we are on the backside of that tropical moisture, the cool front itself will be somewhat limited in its dynamics and moisture availability aloft and that will impact the rainfall totals.  Some lucky locations may receive an inch or so, but most of us will be far below that.

For tonight, we expect to be dry as Cindy lifts out to the NE and the front will not be arriving till after sunrise.  A light SE breeze under partly cloudy skies will keep temperatures from dropping much and we should be in the low-mid 70s to start the day.  The cool front will then be making steady progress across the area during the morning and into the afternoon hours and should be located near the Red River by evening.  That means the best time for showers/storms will be morning through early afternoon for most of us and into the evening for the more southern counties.

Brisk northerly winds behind the front together with the mostly cloudy skies will keep temperatures from warming too much and it looks like lower 80s will probably do it for daytime highs and for some of the more northern counties, temperatures may actually drop off during the afternoon hours.

The weekend will then be much cooler as those northerly winds bring in the drier, cooler air and overnight lows for Saturday and Sunday mornings will likely be in the upper 50s to lower 60s.  Daytime highs should be in the low-mid 80s and humidity values will be comfortably low.  The only caveat to all this is that the NW flow pattern aloft may spread some leftover showers/storms back this way for Sunday morning.  Otherwise, look for partly cloudy weekend skies and the milder conditions.

Going into next week, the NW flow pattern aloft continues to be a wild card and will mention just a slight chance of overnight showers/storms.  Otherwise, as our winds return to a southerly direction, look for temperatures to return to at or above normal levels by later in the week as you can see on our forecast page.

Looking further ahead, the 8-14 day outlook suggests a return to near to above normal temperatures along with a near normal pattern of scattered showers/storms.  By then, our normal daytime highs are in the low 90s and storms are at best on a scattered basis.

A Break in the Heat & a Chance of Storms.