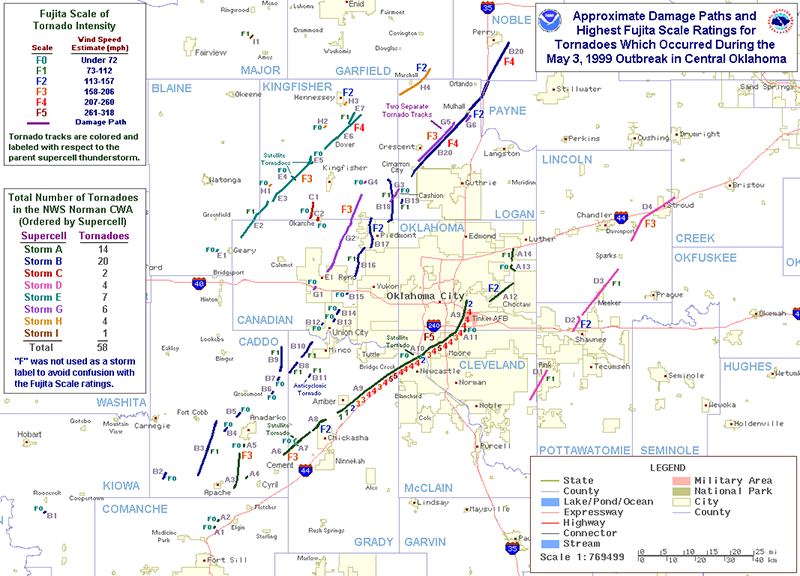 Thought a brief look back at this day in history would be appropriate as May 3, 1999 still stands as a historic outbreak of severe weather and tornadoes, even by OK standards.  This first map is a close up view of Central OK showing the location and intensity of those storms on that date.

The second map is a larger one showing those that also made it into KS and NE OK that night.  Fortunately for us, they were weakening as they moved this way so the numbers and intensities were not as extreme as was endured by the folks in the OKC area that day/night.  Click here if you are interested in more information on this event.

By the way, the preliminary count of tornadoes from the severe weather on Apr 26 of last week is still being evaluated and that number may rise further. The good folks at the NWS office are still doing damage surveys and have identified around a dozen tornadoes along with other wind damage that was judged to be from straight line winds.  The final tally may not be known for several more days as this is a rather time and labor intensive process.

The above serves as a reminder of what can happen at this time of year.  Then there are days like today with lots of sunshine, light winds, and after the very cool start a nice warm-up for the afternoon hours; clearly a beautiful day.  A system has brought some showers and even some thunder to the more W counties of our state late in the day, but the energy from that is diving SE and is expected to keep any showers west of E OK.

As that system moves on by, what clouds we have will be clearing out overnight so look for fair skies to start the day Wednesday and lots of sunshine all day long.  Fair skies by morning together with light winds and dry air in place will result in another cool start to the day with morning lows in the 40s to near 50.  As the day wears on we will have a stronger NW wind and that NW breeze will offset the full sunshine to a certain extent and should keep our daytime highs in the 70s.

High pressure will be settling over us on Thursday with light northerly winds and fair skies so look for another cool start to Thursday morning followed by a nice warm-up that afternoon as you can see on our forecast page.  After that, southerly winds will return Friday continuing through the coming weekend which means warmer nights as the moisture returns, more cloud cover due to the higher humidity levels, and eventually a chance of showers and storms.

Right now, the latest and greatest data runs keep us dry through Saturday but do suggest at least a chance of showers/storms on Mother’s Day.  Those data runs also suggest the more likely time frame for storms will be early next week and given the time of year, will have to consider the potential for severe weather at that time.  Far too early to speculate on the magnitude of the severe threat, but subsequent data runs will be monitored closely as those days draw near for further indications of severe weather.

Also, temperatures will be running above normal over that time frame but as we look further down the road, the 8-14 day outlook continues to suggest below normal temperatures along with a return to an unsettled pattern.