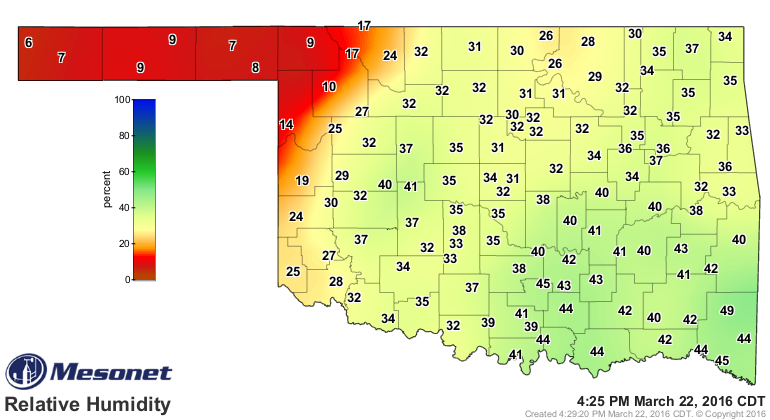 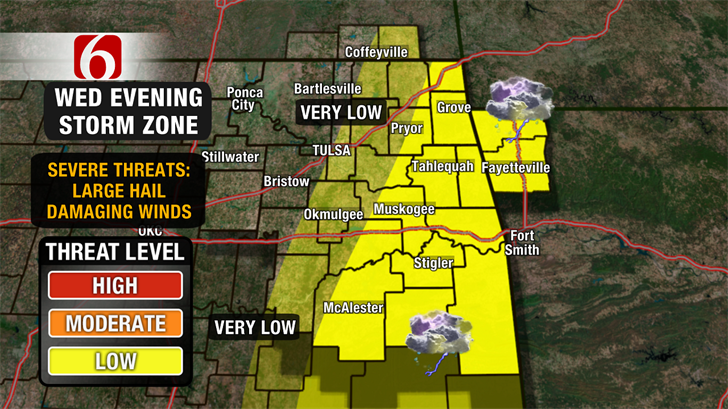 It certainly has been a warm and windy day and those strong southerly winds together with low relative humidity levels have caused another high fire danger situation.  Notice the strongest winds and what the humidity levels were like earlier today; not a good combination.

Those strong southerly winds also kept temperatures much warmer to start the day today and despite the high level cirrus clouds, we had enough sunshine for afternoon temperatures to be 10 degrees or so above normal.  The normal temperature range at this time of year is 64/42 and today’s numbers for Tulsa were 75/51.

Tonight and Wednesday will also be much warmer than normal and also very windy which will keep the fire danger as a major concern.  Much higher humidity levels to start the day will drop off significantly late in the day as a dry line moves into E OK which will also be a focus for storms.  So, drier moving in from the west will enhance the fire danger for the more western counties and the dry line itself will likely cause storms to fire late in the day for the more eastern counties.  Some of those storms will likely become severe with primarily a wind/hail threat and those storms will quickly move on eastward into Arkansas during the night.

For tonight,  southerly winds of 20-30 mph or more will keep temperatures from cooling much with morning lows only dropping into the lower 60s.  We will also see a low level stratus deck and possibly some drizzle or an isolated light shower or two.  As the day wears on, those southerly winds will kick back up to 40 mph or more at times and gradually veer around to a more SW direction as the dry line moves eastward late in the day.  A cool front will follow quickly on its heels with gusty NW winds for the rest of the night and through the day Thursday.

As you can see on our forecast page, that will also cool us off considerably for Thursday although we should see clearing skies during the day and lots of afternoon sunshine.  Friday could see another frosty start and perhaps even a freeze for the cooler valleys followed by a nice warm-up with sunny skies and a return to southerly winds.

Saturday will see increasing cloud cover and perhaps a shower by the evening/night.  Better chances of rain or showers and perhaps even a rumble of thunder will be overnight and into the morning hours of Easter Sunday.  The storm system responsible for the rain will also push a cold front through the state by early morning so we will have brisk northerly winds all day and much cooler temperatures.  The current data runs suggest that Easter Sunday will start cool and wet with the showers ending that afternoon and perhaps some sunshine late in the day, but still very cool with temperatures holding in the 50s.

After a chilly start to the day Monday there will be a big rebound for early next week before another strong cold front arrives by the middle of the week.  Notice the 8-14 day outlook continues to suggest below normal temperatures on average during that time frame.  As mentioned yesterday, after dealing with much warmer than normal temperatures for much of the winter and until recently the month of March, it appears that a cooler signal will persist going into early April.  That is not particularly unusual, but this year has been so mild up to this point it does stand out as an anomaly for how our year has gone so far.  Some longer term climate drivers such as the waning El Nino and some variations in the Arctic Oscillation may keep this roller coaster ride for temperatures going well into April.