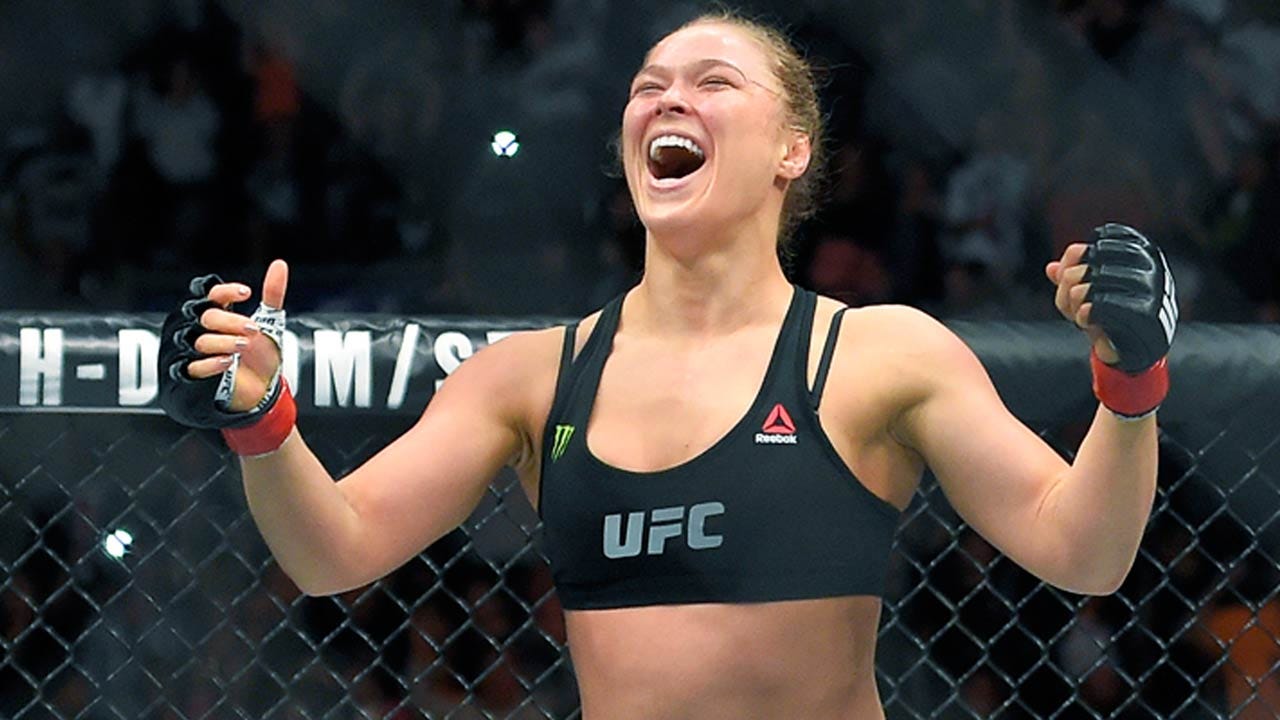 One Eagles fan wrote a petition asking Pope Francis to bless Sam Bradford’s knees when he visits Philadelphia this September. The petition currently has over 6,100 supporters.

It reads: “The Pope is coming to our city! Our city! With this Eagles season coming up, a lot of our Super Bowl hopes rely on Sam Bradford’s knees staying healthy. So, with one of the most religious representatives in the world visiting our wonderful place we call home, how about we get him to bless Bradford’s knees during his visit to Philly! This town deserves a Super Bowl and a healthy Bradford is the only way we will have a parade down Broad Street!”

It sounds extreme, but the former OU quarterback has had it rough these past two seasons, tearing his anterior cruciate ligament in his left knee twice ending both seasons with the St. Louis Rams.

Maybe the Pope can provide Eagles fans with hope.

2. Ronda Rousey Says She Can Beat ANYONE In No-Rule Fight, Including Mayweather

And the Rousey-Mayweather feud continues. Monday night in an “Ask Me Anything” Q&A on Reddit a fan asked Rousey if she could beat Floyd Mayweather in a no-rule fight.

She responded: “Do I think I would legit beat Mayweather in a ruleless fight? Floyd is one of the best boxers of all time. He would definitely beat me in a boxing match. I, unfortunately, don't get into "matches." I fight for a living. In a no rules fight, I believe I can beat anyone on this planet. Boxing is a sweet science with strict rules that I respect very much and aspire every day to improve at. But you said ruleless fight, and that's my honest answer.”

Maybe in an MMA match, but in a no rules fight, Ronda may be getting a little ahead of herself. At the end of the day, it’s an unfair match that will probably never happen.

Mayweather was on his high horse naming himself as the greatest fighter of all-time on his top five all-time list.

Pernell Whitaker at No. 3? Mike Tyson and George Foreman didn't make his list, but he had Whitaker ranked No. 3 all-time. The fact that he ranked himself No. 1 over Ali made it clear that his list was going to be laughable. Mayweather is a great fighter, but the greatest of all-time is The Greatest a.k.a Muhammad Ali.

If you’re going off numbers at age 30 then Miller made the probable choice.

Not to discredit Bird or his numbers in the age-to-age comparison, because he is undoubtedly one of the greatest players to ever play the game, but I’m taking LeBron. Sorry, Miller.

New York Jets quarterback Geno Smith got his jaw broke in a locker room altercation, putting him out for six to ten weeks.

Multiple reports say the fight broke out over a $600 plane ticket that Smith accepted from teammate Ikemefuna Enemkpali to appear at a camp. When Smith didn’t show up, Enemkpali demanded a refund for the ticket he purchased. On Tuesday, when Enemkpali confronted the quarterback about the money he felt he was owed a confrontation broke out, resulting in Smith’s fractured jaw.

“It had nothing to do with football. It was something very childish. He got cold-cocked, sucker-punched, whatever you want to call it, in the jaw. He has a broken jaw, fractured jaw.”

“The team knows it's something we don't tolerate, something we can't stand. You don't walk up to a man and punch him in the face.”

"I apologize to the Jets organization, coaches, teammates, and fans," Enemkpali said. "Geno and I let our frustration get the best of us, but I should have just walked away from the situation. I deeply regret and apologize for my actions. It was never my intention to harm anyone. I appreciate the opportunity I had with the Jets."

Enemkpali was released from the Jets but picked up a day later by the Bills.

Tom Brady sent a text to Manning apologizing to him for an email exchange he had with a friend about Manning’s career approaching its end.

Manning didn’t think too much of the email, releasing a statement saying, “Everybody has been speculating on that for a long time, so I guess he's joining the list of trying to predict. Hey, Tom sent me an apology text that was unnecessary. The fact his emails got revealed, that doesn't make a lot of sense to me… No harm, no foul, I didn't think a lot of it. I didn't think a lot of it. Somebody said I was roasted, I've been roasted before and that is not roasted. I haven't been on a Comedy Central roast, but I've been to a couple private dinners and banquets where I didn't know it was going to turn into a roast of me, but it did. I can promise you that email was amateur night compared to some of the things that were said about me.”

It’s nice that Manning made light of the situation and even threw some humor in there.

Tom Brady’s courtroom sketches hit social media and went viral Wednesday for not looking like the star quarterback. Many people took to Twitter saying that Brady looked like a character from The Walking Dead in the drawings.

Veteran courtroom sketch artist Jane Rosenberg drew the sketches and defended her work but later issued an apology to Brady saying, “I’m getting bad criticism that I made him look like a Lurch, and obviously I apologize to Tom Brady for not making him as good-looking as he is.”

You know what they say, “Beauty is in the eye of the beholder.”

8. M.J. And LeBron Go Back And Fourth

At his Michael Jordan Flight School Camp, Jordan was asked if he could beat LeBron James in a game of one-on-one if he was in his prime; Jorden responded, "No question!" A huge applause then broke out.

Soon after, LeBron came out with a statement saying he’d pick himself if he had to choose between himself and Jordan, both in their prime.

The statement read: “Oh, I take myself, for sure. I mean, I’m gonna take myself versus anybody. I’ll tell you one thing, they’re gonna have to have a few wheel chairs and a couple ambulances there to get us off the floor.”

Two greats with confidence saying they’d beat each other, it makes sense, but I’m taking M.J. on this one.

And the “I’m the best” saga continues. Kevin Durant joins LeBron James in claiming to be the best hooper in the world.

Thursday, Durant released a statement saying, “No disrespect to anyone else, but I feel like I’m the best player in the world.”

A healthy Durant is a force to be reckoned with. I can’t wait to see how the James-Durant battles play out on the court between the two friends this season.

McGrady was good, really good, but come on, the greatest of all time? No.

Kobe Bryant soon reminded his teammate that he was playing with the GOAT by quoting Russell’s tweet with a sleeping emoji the next day. Russell then apologized, and Bryant tweeted back saying, “Ha! All luv lil bro lets shock da world this season. #history”

I’m sure Lakers fans across the world were excited, patiently waiting to see if their team will make the playoffs this season.

Well, that concludes this week’s ten interesting and debatable sports moments. If you come across any moments that you think should make next week’s list email them to porsha.richardson@newson6.net.