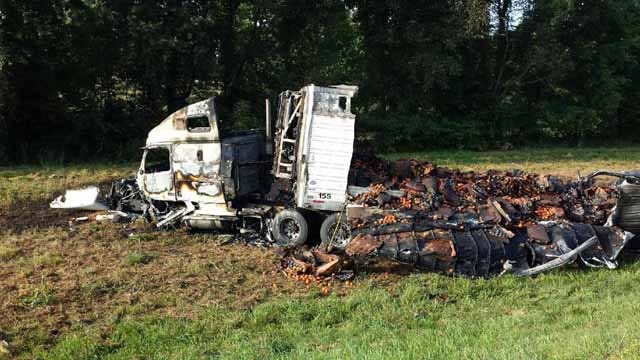 Two people died after a semi went through an accident scene on the turnpike, striking people who were standing outside their vehicles assessing damage.

The fiery multi-vehicle crash happened a little after midnight in the eastbound lanes, about 6 miles from the Missouri border. Troopers had to close part of the Interstate for almost 7 hours.

OHP said the first vehicle was disabled and blocking the roadway after a previous collision, and a second vehicle crashed into it. A semi came along and hit both vehicles and the people who had exited their crashed cars.

According to the accident report, Howard Shelton, 44, and Celeste Shelton, 45, who were in the second vehicle and became pedestrians, died at the scene. The Sheltons are from Miller, Missouri, the report says.

The driver and passenger of the first vehicle –- Michael Witten, 22, and James Witten, 59, both of Trenton, Missouri -- were not injured.

The driver of the semi, Dragan Radivojevic, 44, of Scottsdale, Arizona, and his passenger, Aleksandar Radivojevic, 21, of LaGrange Illinois, were treated and released from a Miami hospital.