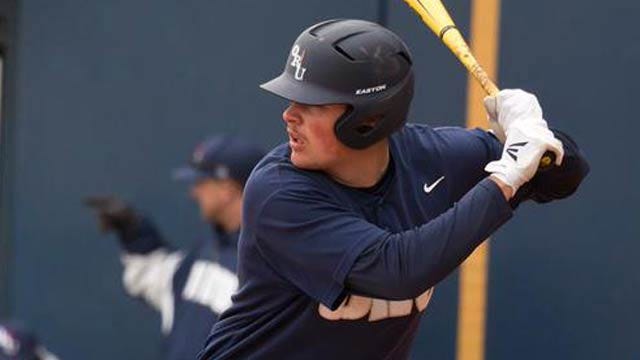 The Oral Roberts baseball team was unable to overcome miscues twice on Saturday splitting a double-header with North Dakota State winning game one, 5-3, before the Bison walked off with a 7-6 win in the nightcap.

The Golden Eagles saw their eight game win streak come to an end with the loss in the finale, but have now won 17 of their last 19 games. ORU still sits comfortably in first place in the Summit League standings at 15-3 as the Bison snapped a six game losing streak.

ORU got a solid pitching performance in game one from Xavier Altamirano who picked up his fifth win and improved to 5-1 on the year. Altamirano went 6.2 innings and held NDSU to just four hits and three runs although just one was earned while also striking out seven.

Sequeira picked up his fifth save of the season pitching the final two innings and allowing just one hit as he faced eight batters. He also hit a 2-run home run to put ORU up in the eighth inning before the Bison rallied in the ninth of game two.

Noah Cummings stayed hot at the plate going 1-for-3 with two RBI in game one and 2-for-4 in game two. Chase Stafford also continued to swing a hot bat going 3-for-6 with a home run in the second game.

ORU jumped out to an early 4-1 lead in game one that was capped off by a two run third inning. The final blow for the Golden Eagles in game two came in the bottom of the ninth when a bases loaded walk followed by a single inside the third base bag gave NDSU a walk-off victory.

Oral Roberts: Chase Stafford was 3-for-6 with a home run and two RBI. Matt Brandy was 3-for-5 with a double, two walks and was hit by a pitch while scoring twice.

NDSU: Juan Gamez finished 4-for-5 in the double-header with a RBI and three runs scored. Game two starting pitcher, Trent Keefer allowed just one run and four hits over the first five innings with four strikeouts.

Inside the Box Score

- The Golden Eagles have won eight straight games and 17 of their last 18.

- Matt Brandy reached in both games to extend his on base streak to 28 straight games.

- ORU had three errors in both games of the double-header. It was the first time since the final two games against South Dakota State the Golden Eagles finished with three errors.

- Derrian James extended his hitting streak to 10 games with a RBI in his final at bat in game two. The streak is the longest for any ORU player this season.

- The seven runs scored by NDSU were the most by an opponent since SDSU snapped the Golden Eagles' nine game winning streak on April 4 – which was also the last loss by ORU.

- ORU hit four home runs in the series against NDSU the most since hitting five in a three-game series at SDSU and second most this season.

- During the eight game winning streak ORU outscored their opponents 83-19 which included the 5-3 win in game one on Saturday.

- ORU got on the board early with a bases loaded walk to Noah Cummings to score Derrian James who reached on a double in the top of the first inning.

- James continued to swing a hot bat with a RBI of his own in the second inning that plated Chase Stafford to put ORU up 2-0.

- NDSU scratched a run across in the second inning when Paul Funk singled home John Skrbec to pull the Bison within a run.

- Matt Brandy helped the Golden Eagles answer in the third inning as a wild pitch on ball four allowed the senior to cross home. One batter later, Dean Wilson reached on a throwing error by the Bison and Audie Afenir scored to give ORU a 4-1 lead.

- Skrbec blasted a two-run home run to left to pull the Bison back within a run in the fourth inning making it, 4-3 ORU.

- The Golden Eagles got an insurance run in the top of the ninth inning when Cummings hit a bases loaded single to center that scored James. The single put ORU up 5-3 as the Golden Eagles held on for the win.

- NDSU took its first lead of the series with a home run to left by Gamez, putting the Bison up 1-0 in the bottom of the fourth inning.

- Chase Stafford answered in the top of the fifth inning on a solo home run to left tying the game at 1-1.

- The Bison would regain the lead in the sixth inning when NDSU scored three runs on two hits and an error. Larimer belted a 2-RBI single into the gap in right for the first two runs. Funk would reach and score Gamez on a suicide squeeze as the Bison catcher beat the throw at home.

- Stafford would help ORU respond in the seventh inning with a sacrifice fly to right scoring Cummings. The next batter, Whatley would fight off a single up the middle to score Mantle who had reached on a single as well and cut the Bison lead in half, 4-2.

- Anthony Sequeira gave the Golden Eagles the lead on an opposite field home run that also plated Brandy.

- The sea-saw battle would continue in the eighth inning when NDSU got a single from Regan that scored Gamez again to tie the game at 5-5.

- The top of the ninth would see more action as ORU regained the lead on a Derrian James single. Whatley scored on the single after reaching with a two-out base hit of his own.

- The Bison set-up the walk-off win when Skrbec worked a bases loaded walk to score Fearing and tie the game. The next batter, David Ernst singled just inside the third base bag and allowed Petersen to score and give NDSU the 7-6 win.

The Golden Eagles returns to J. L. Johnson Stadium Tuesday night for a non-conference meeting with UALR. ORU will be looking for the sweep of the Trojans with first pitch scheduled for 6:30 p.m.