Rainy Week Ahead For Northeast Oklahoma 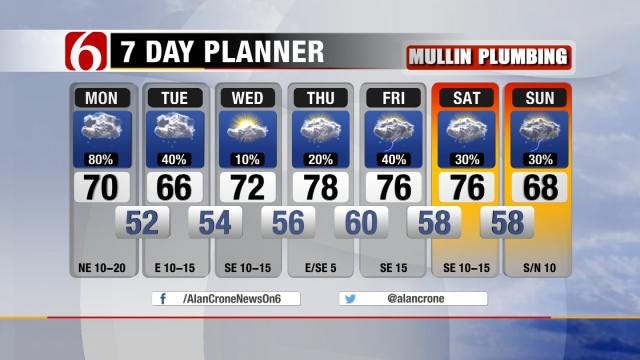 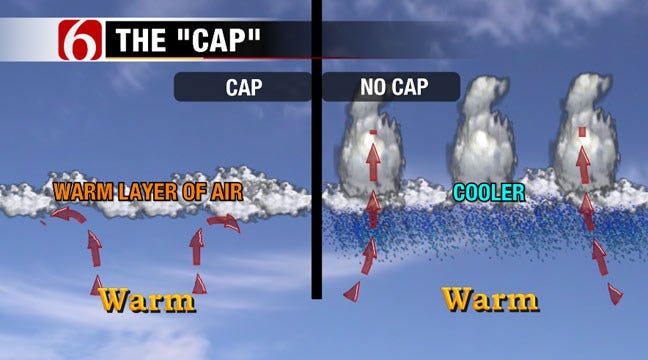 Rain, rain and more rain for this coming week. Rain chances are in the forecast for every day but what about storms?

Continuous upper level waves mixed with low level moisture are the main culprits for the week.

Timing is really on our side with this first system. The frontal passage for eastern Oklahoma should occur after midnight when the lower levels of the atmosphere are cooling and a cap is setting up.

We talk about a “cap” a lot. The cap is essentially a warm layer of air on top of a cool layer of air. At night the surface is cooling faster than the upper levels due to radiational cooling. With cooler air at the surface and a layer of warmer air above, a cap forms.

The cap is good for something though. The layers of air below the cap are able to continue to warm and moisten (especially during warm afternoons) becoming more and more unstable. Depending on how strong the cap is, the atmosphere might not be able to release very much of the energy building beneath the cap. During the afternoon, the sun will warm the air near the surface, making the temperature difference less and less between the air below the cap and above the cap. The cap is then weakened or is removed all together and strong thunderstorms fire quickly. There are several ways a cap can be weakened or removed.

Either way, a highly unstable atmosphere and a weak cap can make for a very interesting afternoon. I've attached a graphic to help my cap explanation make a little more sense.

Back to the forecast now: with the frontal passage in the early morning, that's enough time for a cap to form and inhibit our thunderstorm chances. The atmosphere also becomes more stable as it cools so the instability we have to work with in northeastern Oklahoma during the very early morning hours is significantly less than if it were in the afternoon or evening. That is why the best chance for storms tonight remains mainly to our north and west. The front will then exit Oklahoma tomorrow afternoon, just in time for instability to build across north central Texas.