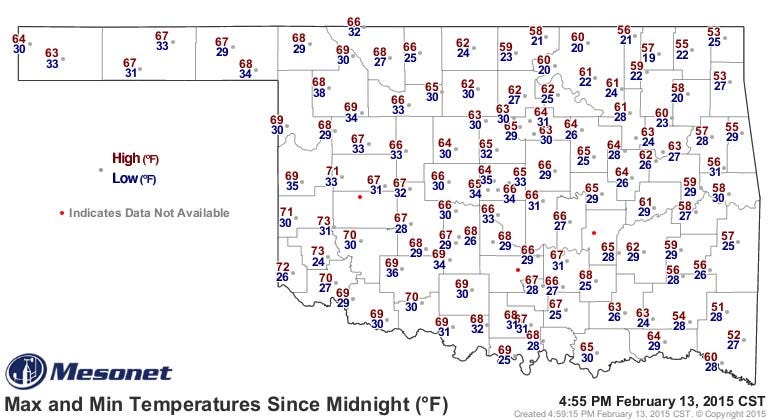 Several forecast issues to deal with for the weekend and going into the following week, which make for a lower than usual level of confidence.

As has been mentioned in preceding blog posts, there are some timing issues and also some data flips that have created additional uncertainty regarding temperature, precipitation and precipitation type in the coming days.

We'll take things chronologically and start off with how nice it was today.

Notice the max/min temperature map, courtesy of the OK Mesonet, and keep in mind that the normal daily temperature range at this time of year is 53/31. Above normal temperatures was the case this afternoon due to a SW wind for much of the day and lots of afternoon sunshine.

Saturday will start off rather mild with morning lows a bit above normal and daytime highs well above normal once again. Location will make a big difference though as daytime highs will be well into the 60s and some of the more S and SW locations may even approach 70 ahead of a strong cold front.

But, here is where the timing issue comes in as bitterly cold air will move in immediately following frontal passage. Obviously the timing of when it passes your location will make a big difference as temperatures will be falling quickly along with gusty NE winds and increasing cloud cover.

Current indications suggest it will reach the more N and NE counties by late morning, quickly surging on southward and through the state by that evening or early night.

For the more northern counties, look for temperatures to have fallen into the 30s by sunset, 40s down to about I-40, much warmer further south but the rapidly falling temperatures will be heading that way. NE winds of 20 mph or more will also make it feel much colder.

At least this part of the forecast will be dry. Cannot say the same about Sunday, particularly later in the day and that night when some energy aloft will be moving over the cold air at the surface.

The result will be cloudy skies all day Sunday along with morning temperatures in the 20s and daytime highs struggling to get much above freezing.

Much drier low level air will also be in place and that is significant as precipitation will have difficulty saturating down to the surface until late in the day or perhaps near dark. That also means evaporative cooling near the surface will likely impact the precipitation type along with the temperature profile aloft.

Currently, this pattern is more supportive of a mixed bag of sleet/freezing rain/rain with potentially some snow for the far northern counties. Amounts will be light, but it does not take much ice to create problems, particularly for elevated surfaces such as bridges, overpasses, and power lines.

Right now, not expecting this to be a major impact event, but these conditions will need to be closely monitored leading up to Sunday.

Notice the 3 day QPF map which has the heavier totals over the more southern counties where it will be mostly a cold rain with possibly a transition Sunday night, ending early Monday.

After that, the system mentioned in yesterday's blog continues to take a more southerly track and the data runs today have kept most of the precipitation much further south for Monday and Tuesday.

By then, anything that falls will be in the form of snow due to the vertical temperature profile, but there will not be much moisture to work with so little or no accumulation is currently anticipated.

As you can see on the forecast page, much below normal temperatures will prevail until late next week when we will finally get a break. However, the overall pattern continues to support more cold air surging southward, particularly east of us as we look at the 8-14 day outlook maps.

Those continue to suggest the brunt of the colder air will be east of us and we will be on the western fringe, but still colder than normal.

Also, there is at least some indication of a more active weather pattern which could bring some moisture during that time frame as well.