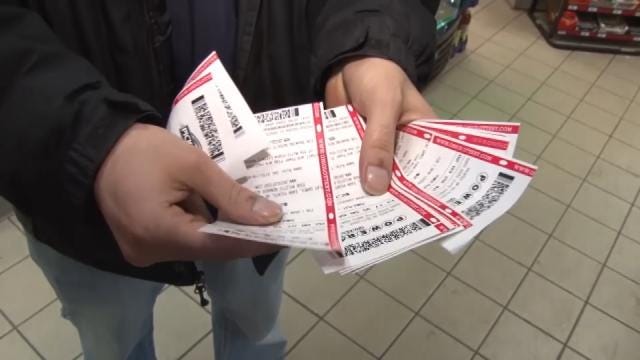 Puerto Rico joined Powerball less than a year ago. Besides 44 states and Washington, D.C., the game is also played in the Virgin Islands, but there has never been a jackpot winner there, Dooley said.

The Texas Lottery tweeted early Thursday that one of the winning tickets was sold at Appletree Food Mart in Princeton, Texas. CBS Dallas reports it's a Valero gas station convenience store.

There was no immediate information on the cities or stores that produced the winners in North Carolina or Puerto Rico.

It had been nearly a year since a Powerball prize reached the giant number people have come to expect recently. That was last February, when someone won $425.3 million.

Wednesday's jackpot was the third-largest in Powerball history and the fifth-largest U.S. lottery prize. The last time a Powerball jackpot climbed so high was May 2013, when a Florida ticket won a $590.5 million prize.

Should the winners select the lump sum option, each would get a one-third share of $381,138,450.16 before taxes. The other option is an annuity, under which the lottery would make payments 30 times over 29 years.

The largest payout in U.S. history was to three ticket holders in the Mega Millions game, the other national lottery drawing. That was a $656 million prize won in March 2012 by players in Kansas, Illinois and Maryland.

In 2012, state officials who run Powerball and Mega Millions changed ticket prices and lowered the odds of winning jackpots in hopes the moves would increase the number of huge prizes and draw more players. The moves worked, causing jackpots to repeatedly climb to record levels. More than half of the top 10 U.S. jackpots have been reached in the past couple of years.

The jackpot now goes back to $40 million for the next drawing on Saturday.

People lined up for tickets around the country in hopes they could beat the odds and win the huge prize.