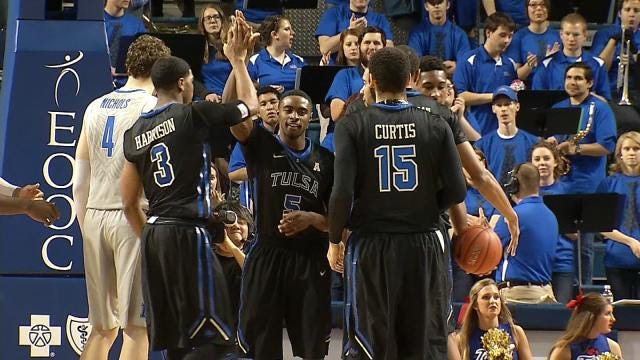 TU men's basketball hosted Memphis Wednesday night in the Reynolds Center. TU pulled off a 73-55 win, remaining undefeated in the American Athletic (6-0) and advancing its win streak to eight.

The first half started slow; neither team could get anything to fall. Memphis soon got on the board first, but Tulsa didn't let the Tigers stay ahead. Rashad Smith went up court for two, answering for the Golden Hurricane.

With just under four minutes left in the half, James Woodard hit a couple of free throws, advancing TU's lead by two.

The Tigers began to chip away at the Golden Hurricane lead in the final two minutes, but couldn't gain the lead. TU didn't like that, so the team turned up its offense a notch with some buckets by Smith and Harrison.

Smith led TU in scoring with seven points. Harrison trailed him with six.

Memphis was 9-21 from the field, 2-8 from the three, and 3-4 from the free throw line. The Tigers scored six points in the paint, two off turnovers, and nine off the bench.

TU extended its lead by four in the opening minutes of the second half (34-23).

Smith knocked down his 10th point with a deep three, helping TU take a ten-point lead. The Golden Hurricane fed off his momentum, stepping up on both ends of the ball, especially on defense.

With 14:13 on the board, Woodard sank a three, bumping Tulsa'a lead up 44-27. Tulsa only got hotter, taking a 23-point lead with 12 minutes left to play. At this point, Memphis couldn't match TU's energy, nor come close to the performance it was putting on at home.

A jumper from Marquel Curtis, extended the Golden Hurricane lead even more. Trailing 35-56, with 8:50 to go, Memphis huddled up looking like it was ready to pack-up and head home.

TU continued to stay hype in its second half takeover, winning 73-55. "We played better defense [in the second half]... We wanted to pick up our energy; I felt like that helped us out a lot," said Harrison.

TU's head coach Frank Haith was proud of his team's performance. "It was a great win for us. I thought our guys played with great tenacity the whole game," said Haith.

Harrison led TU in scoring with 18 points. "He played an unbelievable game, double-double... He's playing at a high-level," said Haith.

TU is now the talk of the town, with its 6-0 conference record and eight-game win streak. "We just practice everyday, and we work hard," said Smith.