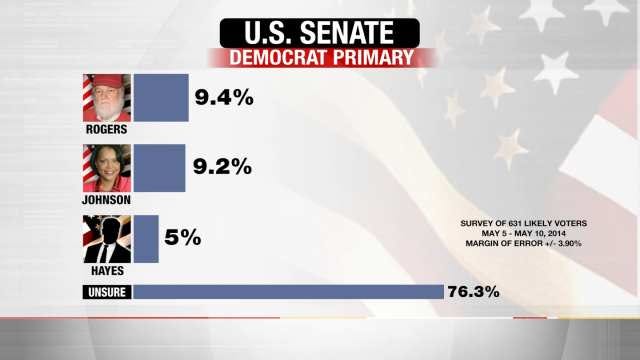 Democrats running for the U.S. Senate seat vacated by Sen. Tom Coburn have a lot of voters to convince.

A News 9/News On 6 poll indicates 76.3 percent of likely Democrat voters are undecided, six weeks before the June 24 primary election.

"The Democrats right now are suffering for a lack of engagement," said Bill Shapard, CEO of SoonerPoll.com. "[Conservative Democrats] are more or less thinking, 'I'm not going to vote or I may vote for the Republican,' and that's the reason why we have a lot of Republicans win in a state that's still dominated by Democrat registration."

One Democrat will have to get more than 50 percent of the votes cast in the primary to avoid a runoff with the closest opponent. The Democrat winner will meet a Republican and Independent challenger in the Nov. 4 general election.

SoonerPoll conducted the survey of 631 likely Democrat voters between May 5 and May 10. Respondents were selected at random using landlines and cell phones. Results were weighted by gender, age, cell phone/landline collection and Congressional district, then stratified using a model of previous primary elections. The poll has a margin of error of plus or minus 3.90 percentage points.