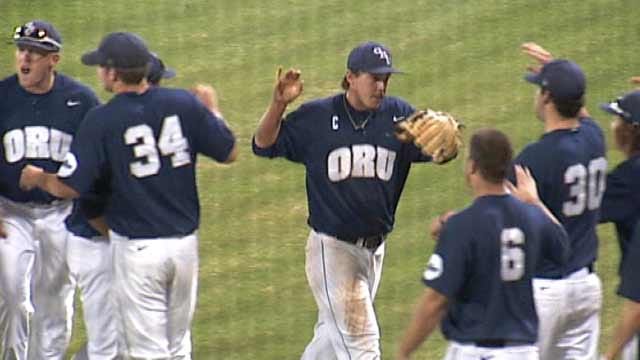 ORU took two of three from the Bears this season, moving the Golden Eagles' overall record to 26-22, while MSU dropped to 20-25.

Jose Trevino had two of ORU's seven hits in the game with an RBI single and a two-run home run. Austen Colt singled and scored twice, and Logan Domenico had an late RBI double.

Kurt Giller (3-3) recorded the win in two innings of work as he allowed just one hit. Jordan Romano entered with no outs in the bottom of the eighth and closed out the game for his 11th save of the season, most by a Golden Eagle since Justin Ramsey had 14 in 2004.

MSU centerfielder Tate Matheny had two hits for the Bears, including an RBI double, and Dylan Becker had two hits as well. Andy Cheray (1-2) was the losing pitcher in 6.2 innings, allowing four runs on four hits.

ORU got some help from the Bears in the top of the first as back-to-back errors put Austen Colt and Logan Domenico on base to start the game. Trevino stepped in and singled to left field to plate Colt to give the Golden Eagles an early 1-0 lead.

In the fourth, the Golden Eagles went up 2-0 on the Bears as Brandon Healy bounced out to short, allowing Graham McIntyre to score from third on the play.

Trevino extended the lead in the fifth inning with a two-run blast out of the ball park in left field, bringing home Domenico to make it a 4-0 game. The home run was Trevino's ninth of the season, surpassing his total of eight in 2013, and was home run number 30 of his career.

In the bottom of the inning, a Golden Eagle error with two outs extended the inning, setting up an RBI infield single by Matheny to cut the ORU lead to 4-1. In the ninth, the Golden Eagles got some insurance as Domenico doubled into the gap in right center to bring home Colt to bring the score to 5-1.

ORU wraps up a five-game road trip on Wednesday as the Golden Eagles head to UALR for a 6:30 p.m. start at Dickie-Stephens Park, home of the Double A Arkansas Travelers.