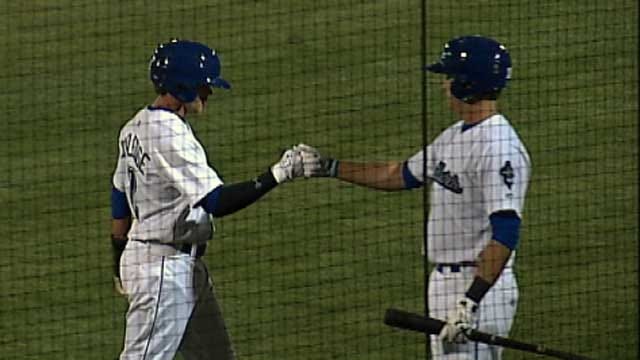 Carrying a three-game losing streak into Friday night's homestand finale with Arkansas, the Tulsa Drillers needed something good to happen. It did, in the form of Dan Winkler.

The right-hander continued his outstanding early-season form, limiting the Travelers to only two runs in seven innings, while his teammates produced just enough offense for a 4-2 victory before a sellout crowd at ONEOK Field.

On a staff that includes three first-round draft picks, Winkler has stolen the spotlight in the first month of the season. Friday's outing was his sixth straight impressive start to open the year. He surrendered only four hits and issued one walk, while registering eight strikeouts.

For the season, the 2013 California League Pitcher of the Year has allowed only 17 hits in 37 innings with 41 strikeouts. Friday's win improved his record to 4-1 and made him the first four-game winner in the Texas League this season, while his strikeout total also leads the league.

The Travelers actually took a quick lead in the contest with a run in the top of the first inning off Winkler, who entered the game with a 0.90 ERA. With one out, Alex Yarbrough and Zach Borenstein delivered back-to-back doubles to give Arkansas a 1-0 lead.

Former Tulsa Union hurler Drew Rucinski blanked the Drillers through the first two innings before Tulsa pushed across the tying run in the bottom of the third. Delta Cleary Jr. tripled for his second hit of the night and scored on a sacrifice fly from Cristhian Adames.

The Drillers took the lead with three runs in the fifth off Rucinski. After Tyler Massey grounded out to lead off the inning, newcomer Jose Rivera walked, and Taylor Featherston singled. Cleary Jr. went down on strikes, but Adames drew a walk to prolong the inning and load the bases. Ryan Casteel followed with a deep drive to deep left field that Borenstein could not catch at the wall. The bases-clearing double put Winkler and the Drillers in front 4-1.

Kaleb Cowart got one of the runs back in the seventh with his third home run of the season.

The Tulsa bullpen ensured that Arkansas would get no closer. Kraig Sitton set the Travelers down in order in the eighth and recorded the first out in the ninth.

Scott Oberg took over for the final two outs. Brian Hernandez singled on Oberg's second pitch, but Oberg struck out Cowart and got Jett Bandy to ground out to end the game. The save was the fifth of the year for the Drillers closer.

Three Tulsa players recorded two hits each in the game. In addition to Cleary Jr., Featherston and Casteel also picked up two hits.

Tulsa will open an eight-game road trip Saturday night in Springfield. The trip will include four games against the Cardinals and four games against Arkansas in Little Rock. In the opener at Hammons Field Saturday, Jon Gray (2-2, 3.80 ERA) will pitch for the Drillers, while Sam Gaviglio (1-4, 7.23 ERA) work for the Travelers. First pitch at Hammons Field is scheduled for 6:10 p.m.