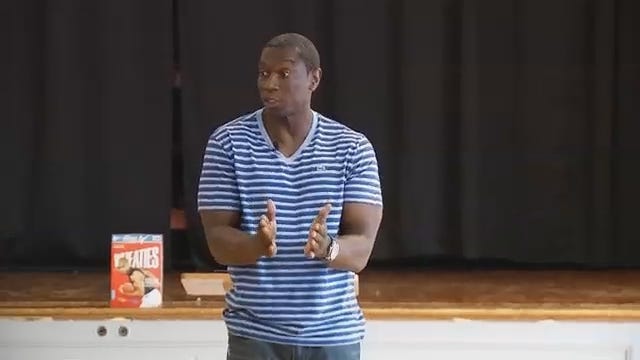 His father wasn't as successful.

"Going to the left, robbing, stealing, selling drugs," Peterson said. "When I got the end of the road I made that left turn."

Peterson planned to play basketball at OU. Instead, he landed at Idaho State. He had aspirations to play in the NBA, but his own brother, who was a drug addict, put an end to any dream of pro ball.

"I took apparently to many steps towards him," Peterson said. "He leveled the gun down on me. And he shot me 3 times."

That led to the left turn of selling drugs, then to 7 years in federal prison. He left behind his family, including son Adrian, who was becoming a star at OU.

"He realized that I made a mistake," Peterson said of Adrian. "There were times that he needed his father and I wasn't able to be there. And those were some painful times for me."

In fact Nelson didn't see Adrian play until his junior year. He was able to watch Adrian become a star with the Vikings. Nelson says they've maintained a healthy relationship.

"Adrian and I have always maintained a strong bond throughout my incarceration and after, we're going to give love to each other, say what's up how you doing," Peterson said. "I'm going to ask how the groin's going."

Currently, Nelson talks about his life story to students. He visited the Street School, an alternative high school in Tulsa. And as he taught ‘AD' to never stop running hard, he tells kids to never stop doing things the right way.

"Kinda like that do as I say not do as I do," Peterson said. "That type of mentality."

Everybody may not get that message, but before they make that drastic decision in their life. Maybe something Mr. Peterson said can ring that bell in their head.