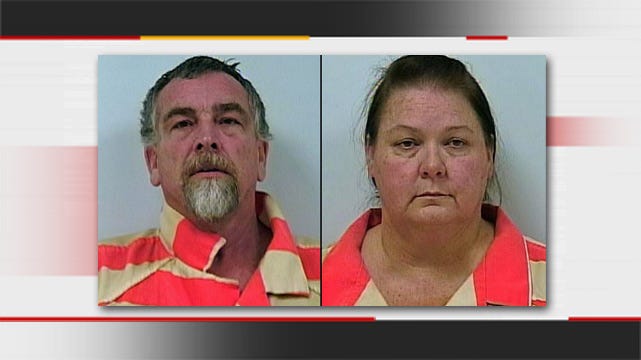 A Sperry couple has been found guilty of abusing their adopted children in a case that has gripped many in horror.

The Osage County jury found both Aubrey Thomas and his wife, Lora Lee Thomas, guilty on four counts each of child abuse. Allegations levied against them included withholding food from the children, violently beating them, and forcing them to eat vomit and manure and perform sexual acts.

Investigators said they believe the abuse amounted to extreme torture.

Sentencing will be held March 13, but the jury recommended 40 years on each count for Aubrey Thomas and four life sentences for Lora Lee Thomas.

The home-schooled children were coached not to say anything about the abuse, according to investigators.

The Thomases became foster parents in 1997. According to sheriff's investigators, two foster children showed signs of physical abuse and were removed from the home in 2003 when they lived in Rogers County.

Four other foster children were left in the home and were eventually adopted into the family. The Thomas' then moved to Osage County.

The Oklahoma Department of Human Services released a statement after the 2012 arrests and called the couple's acts sickening and intolerable. The agency said it began an internal investigation which promised corrective action.

News On 6 has contacted DHS and asked for an update on its investigation. We will add a statement in this story when we receive it.

Since the initial investigation into the couple two years ago, a new arrest has been made.

An affidavit says at the same time the Thomases were abusing the children, Garrett Thomas, the couple's biological son who is now 23, was using the children for his own sexual gratification.