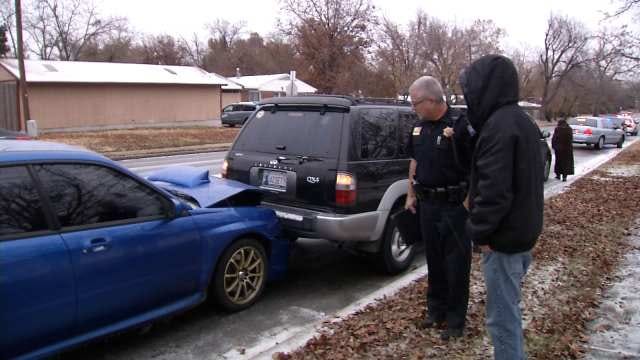 If you have to drive in snow and sleet, Tulsa police urge you to take plenty of precautions, so you don't end up in one of the 15,000 car crashes that happen every year.

News On 6 went on a ride along with police Thursday to find out the three biggest mistakes drivers make in these conditions.

Police say, when people first get behind the wheel and first get going, they tend to think things aren't that bad, so they think they can drive pretty normally, but that is absolutely not the case when there's ice and snow on the roads.

Corporal Steve Wood said it is possible to get around in these conditions, but only if people are willing to drastically change the way they drive.

He said 25 to 30 miles an hour is about right for these conditions and in some cases, that's too fast.

"It doesn't have to be bad weather; the number one factor in our wrecks is not paying attention. You should not be running into the car in front of you," Wood said.

He says too many people are looking at things other than what's happening on the road around them.

Mistake number three: driving too close to the car in front of you.

"Back off. There's no point in pushing the car in front of you down the road. They can't go any faster either," Wood said.

In normal weather, you're supposed to leave two or three seconds between you and the car in front of you, but in weather like this, it needs to be eight to 10, so you can stop no matter what happens in front of you.

One wreck we responded to was a rear end collision, and when the drivers stood between the cars to exchange information, another car hit them from behind, sandwiching the two people in between the cars, sending them to the hospital.

Oklahoma's quick clearance law says, if you have a wreck and there are no major injuries or hazardous materials, you must move off the road immediately. Police don't determine fault anyway, they only write a ticket if there's a criminal violation.

"We can figure all that stuff out while you're in the parking lot," Wood said. "It's not worth causing another wreck because you want to be able to prove something to a police officer."

The number one ticket Tulsa police say they write at car wrecks is for rear ending the car in front of them.

Friday morning, police say, before you take off, make sure all your windows are completely clear of ice and snow. Avoid making these other common mistakes, and you should also avoid a costly or dangerous wreck.

While the snow is falling, "Operation Slick Streets" is in effect in Tulsa. That means if you have a non-injury accident, you need to exchange insurance information and file your own collision report, instead of calling police.

You can download the collision report form here or pick one up at any Tulsa Quik Trip.