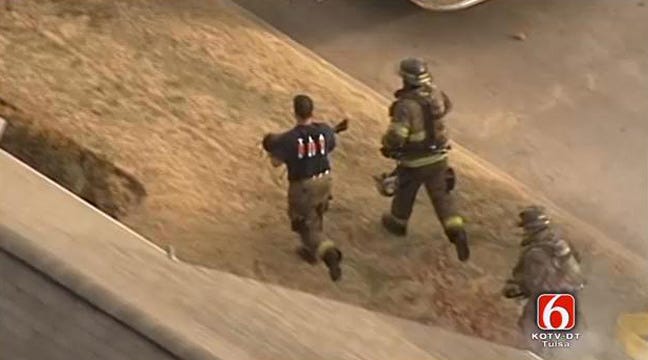 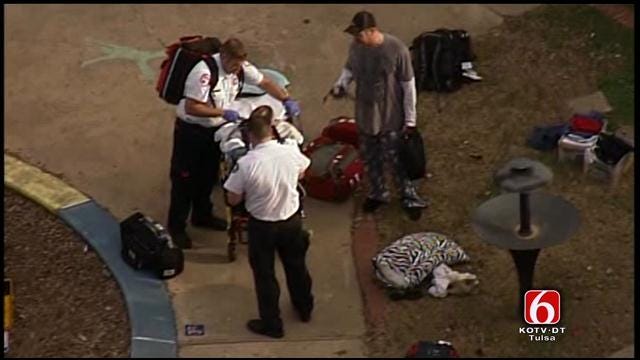 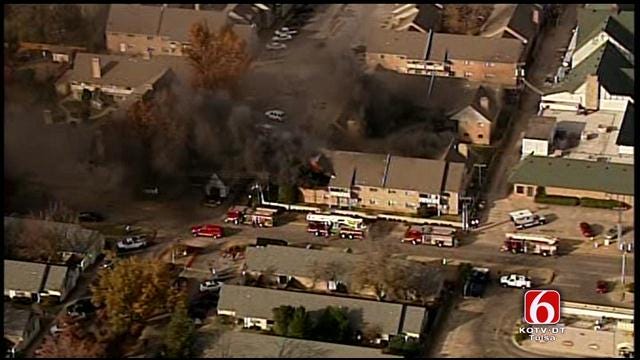 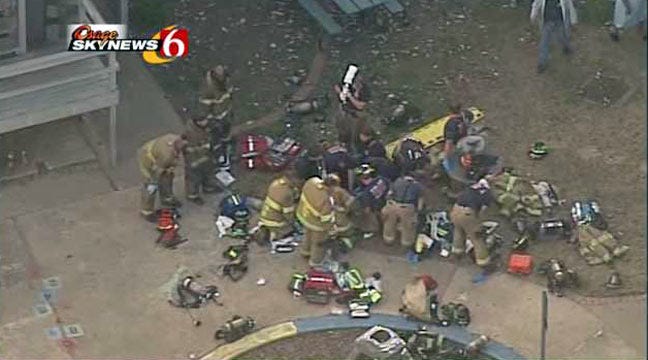 Captain Stan May says investigators ruled the cause accidental, and say it was started by cooking.

Osage SkyNews 6 arrived on the scene at East 59th Street and South Lewis Avenue even before the firefighters, and saw smoke and flames billowing out of a building at London Square Apartments around 3 p.m.

The flames were thick from the outside, but even more fierce inside.

"It was just so hot and the flames were just so huge, there was just no way I could get to them," said neighbor Jon Hodges.

EMSA says the two children were girls, a 2-year-old and a 5-year-old.

Neighbors say their mother was outside, screaming for help.

One person was seen attempting to climb to a second-floor window before falling back to the ground.

Long said she and several men rushed to help. They kicked in the apartment door to try to get to the children.

"We tried real hard to go in and save them. We were yelling, 'Please, make some kind of noise so we can find you.' We didn't hear nothing," Long said.

Long said the smoke was too thick and the flames too hot. They had to turn around.

"All I keep thinking is, if I'd stayed in there a little bit longer, I could have gotten them," Long said.

Hodges said, "It breaks your heart, when you're so close and you can't do anything to save them, you know?"

Firefighters did eventually get to the children. One small child, who appeared unresponsive, was rushed to an ambulance, where she was transported to St. Francis Hospital in critical condition. They pulled out another child and performed CPR on the scene for several minutes, before rushing her to a waiting ambulance.

All the neighbors who tried to rescue them could do was stand back and watch.

"I just want this day to have never happened. Those babies didn't deserve that," Long said.

EMSA said the two girls were transported to the hospital, both in critical condition, along with three adult females. One 42-year-old woman was transported in fair condition. EMSA, Monday night, didn't have ages for the two other women who were transported, but said one was in serious condition and the other was fair.

Hodges said his wife was one of the women taken to the hospital. He said she had passed out due to smoke inhalation, but was expected to be released Monday night.

As large as Monday afternoon's fire at London Square Apartments was, it took firefighters just minutes to get it under control. But the emotional toll of the fire is still being felt by the victims, their families and friends, as well as the first responders.

Firefighters say days like this are tough to handle.

"Most of them are parents like everybody else," said Captain Stan May. "That's every parent's worst fear, and that's what they have to deal with when they go in there. We make sure that we follow up with those guys, make sure they're not having any issues in the next few days."

The initial firefighters who responded to this fire were sent on at least two other calls after the fire. May said it helps most firefighters to continue working and stay busy after fighting a deadly fire.

The Red Cross is assisting 32 individuals who were either displaced by the fire or lost possessions in the fire.