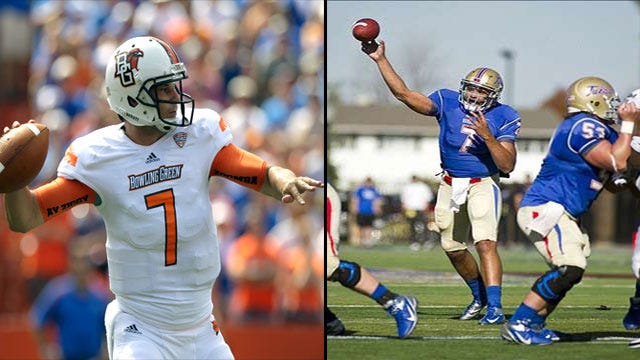 It's a Thursday-night showcase for the Golden Hurricane as they open the 2013 season on the road against the Bowling Green Falcons.

Despite losing a majority of their starters, Tulsa enters the season with high hopes and expectations to maintain their dominance of Conference USA.

BGSU returns almost all of its starters from an 8-5 squad, but that record is a little misleading. Only one of the Falcons' wins last season came against a quality opponent (@Ohio), while the other seven came against opponents with a combined 13-72 record – that's really bad.

Bowling Green's only noticeable loss comes at the running back position. The Falcons lost their top two rushers from last season when Anthon Samuel left the program and John Pettigrew graduated. Those two combined for 330 carries, 1,560 yards and 17 touchdowns, so there's certainly a void that needs filling.

The Falcons are quarterbacked by senior Matt Schilz, who struggled with consistency last season. Schilz threw for 2,585 yards and 14 touchdowns, but was hurt badly by his 12 interceptions. Unless Schilz can improve, the scrambling sophomore Matt Johnson might start getting snaps.

While the offense is a bit of a question mark, the Falcons' strength is found on the defensive side of the ball. BGSU was sixth in the FBS in yards allowed last season (296.6 per game) and return nine of those 11 starters. The two they lost (2012 MAC defensive POY Chris Jones and three-time All-MAC linebacker Dwayne Woods) will leave big voids, but expect the Falcons to find a way to fill them.

How Tulsa Can Win

Does that mean Tulsa's defense is going to be awful? No, but it might be. And even if the defense is good, there's a solid chance it will take a few weeks for the new guys to gel together.

This boils down to one thing: TU's playmakers have to play like stars.

Quarterback Cody Green has to bring his ‘A' game, recievers Keyarris Garrett, Jordan James and Thomas Roberson have to make plays, and running backs Trey Watts and Ja'Terian Douglas have to bust a big run or two.

Vegas favors the home team by 3 ½, but don't expect Tulsa to care. The defending Conference USA and Liberty Bowl champs won't have any issues opening up on the road in primetime – this game will simply come down to execution.