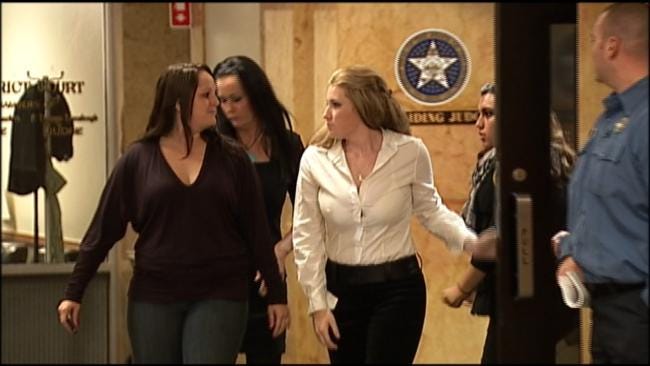 Amber Hilberling is accused of pushing her husband Joshua Hilberling out of a high-rise window in June 2011.

Jurors saw two videotapes on Thursday, one showing the crime scene and another of the interview Amber Hilberling did with police the day her husband died.

Testimony was hard on the jurors and everyone in the courtroom who cared for Josh Hilberling because the crime scene video showed his body on the top of the eighth floor parking garage and the medical examiner's photos, which were displayed on the courtroom wall, showed his extensive injuries from the fall.

The medical examiner said Josh Hilberling had broken bones in both his arms and both his legs, most of his ribs were broken, along with his sternum and pelvis and neck.

He could not say whether Josh Hilberling came out the window facing forward or back first.

That's a big part of this trial: If he came out back first, Amber Hilberling's claims that the couple were fighting and she shoved him would be plausible. But if he came out face first, it would mean she shoved him from behind and it wasn't self defense.

The defense used a tape measure and tape on the floor to show the jury the window is 2-feet, 2-inches off the floor and is 4-feet, 4-inches tall. They also used tape to show Josh Hilberling was about 6-feet, 3 inches tall.

A detective at the scene testified nothing inside the apartment was out of place, there were no signs of a struggle. The jury got to see the inside of the apartment for themselves as part of the video of the scene.

The detective testified he found a protective order in the apartment that Josh received against Amber the month before his death.

Her attorneys pointed out it had been dismissed weeks earlier.

A prison inmate, Bonnie Fulton (or Lamdon), is in prison and testified while she was in the Tulsa County jail with Amber, that Amber told her Josh was going to move out and that she caught him off guard and "killed the bastard."

The attorney wondered if the woman had made up the story just to get her name in the media.

The last thing the jury saw before they left today was a videotape made of Amber Hilberling while she was in an interrogation room at the police department with her grandmother.

While talking to her grandmother, Hilberling said, "I'm a horrible person. I pushed my husband and made him fall out the window."

She repeated several times how she couldn't stop seeing Josh fall to his death. She also wondered if he knew he was going to die and wondered if he said a prayer or cursed her name as he fell.

Her grandmother told her that she was in shock and not to talk to police without an attorney.

Prosecutors rested their case today, and the defense will present its side on Friday. The judge said he expects the trial will finish on Monday.