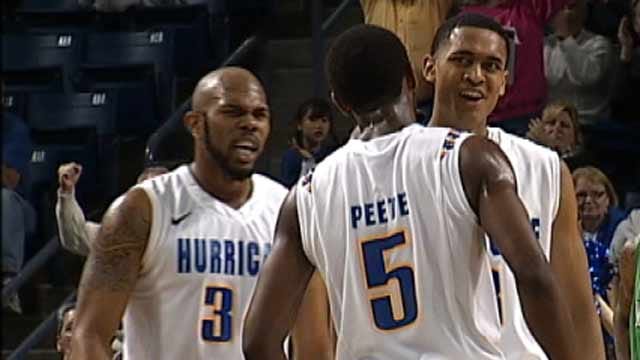 Wright was one of five Hurricane players in double-figures as he reached his 21 points on 8-of-11 shooting. Wright scored 19 of his 21 points after halftime.

The Hurricane shot 45.5 percent from the field, while holding Houston to a 36.6 clip. Tulsa recorded 56 points off of its bench compared to Houston's 22.

Houston was led by TaShawn Thomas, who tallied 31 points, and Joseph Young, who added 25.

Tulsa opened the third overtime with a 5-0 run to take a 91-86 lead with 4:20 remaining. After three free throws by Houston's LeRon Barnes, Tulsa responded with a 6-0 run to propel the Hurricane to a 97-89 advantage with 1:38 remaining. The Cougars cut the lead to five thanks to a Jherrod Stiggers three-pointer with 37 ticks left, but Tulsa connected on 4-of-6 free throws down the stretch to hold on for the win.

The Hurricane built its lead up to four points with 12:09 remaining, but Houston countered with a 5-0 run to assume a 48-47 lead with 11:31 remaining. Neither team could build a lead larger than three points until Ray's jumper with 1:27 gave TU a 63-59 advantage. After a layup by Houston's Thomas, Woodard's slammed the ball home to extend Tulsa's lead to four with 39 ticks remaining. Houston responded with a layup, but Ray answered with two free throws to extend the lead to four with 33 seconds left. The Cougars missed a trey, and Woodard rebounded the ball and was fouled. The freshman went 1-of-2 from the line to propel the Hurricane to a five-point lead with 21 seconds left before UH countered with a layup.

Holding a three-point advantage with eight seconds, freshman Shaquille Harrison hit two free throws to give TU a 70-65 advantage w. Thomas hit a layup with five ticks on the clock, and after a TU turnover Houston's Jherrod Stiggers hit an off-balance three pointer to tie the game at 70 and send the game into overtime.

In the first half, the Hurricane stormed out of the gate beginning the game on an 11-2 run keyed by a trio of three pointers, two of them off the hands of Swilling Jr. After TU led 21-14 with 4:35 remaining in the frame, Houston went on a 14-7 run to close the half as the teams went into the half deadlocked at 28 apiece. Tulsa shot 43.5 percent from the field while holding Houston to 30.4 clip from the floor. Houston scored almost half of its points from the charity stripe as the Cougars were 13-of-17 from the free throw line.

Tulsa will host East Carolina on Wednesday, February 20 in a 7:05 p.m. tilt at the Donald W. Reynolds Center.