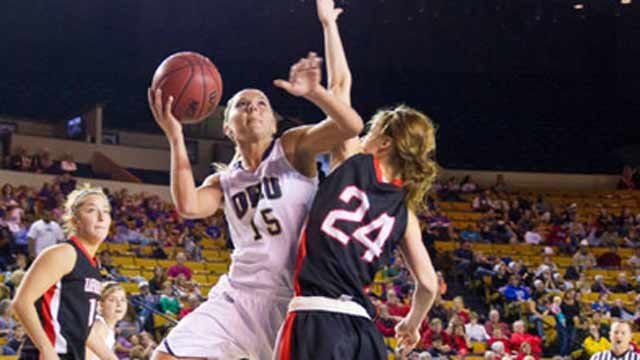 The Lady Demons came out hot, hitting five of their first nine 3-pointers. A trey from Perez at the 12:37 mark gave the home team a 16-11 lead.

But the Golden Eagles scored seven straight to take the lead. A steal-and-score from Savanna Buck put ORU ahead, 18-16, with 10:47 left in the half.

The first half was exceptionally close and was tied at the conclusion of the opening 20 minutes. A 3-pointer from Jasmine Bradley evened the score at 37-all.

Northwestern State shot the ball at a 63.6 percent clip in the opening half, with Lee scoring a team-high 12 points. Bigham led the Golden Eagles with 14 points.

The Golden Eagles took a 50-45 lead, their largest of the game, with 13:07 remaining, but they could never put distance between themselves and Northwestern State. That came back to haunt Misti Cussen's team with 6:31 left, when Bradley hit a layup to give the home team a 59-57 lead.

The Lady Demons took the lead for good with 4:38 remaining, as Perez hit a contested 3-pointer to give NSU a 62-61 edge.

ORU missed their final four shots and turned the ball over twice in the game's final four minutes to suffer their fourth conference loss of the season.

Overall, the teams swapped the lead 14 times and were tied on 13 occasions.

The Golden Eagles will try to get back in the win column on Saturday afternoon, when they face Stephen F. Austin. Tipoff in Nacogdoches, La., is scheduled for 3:30 pm CT.