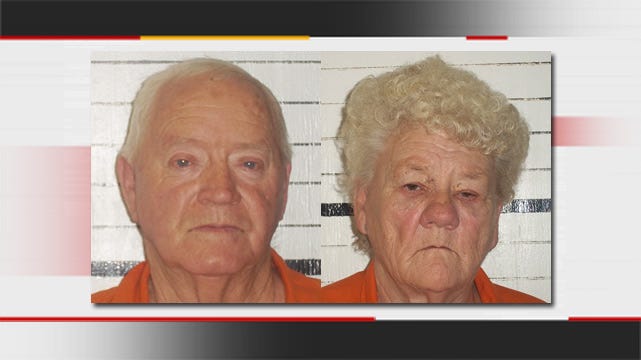 A Maysville man and woman are in Muskogee County Jail after a narcotics sting. Jimmie Warren Sumpter, 67, and Caroline Sue Hawbaker, 66, tried to sell undercover officers 359 prescription pills, according to the Muskogee County Sheriff's Office.

The pair told officers they sell their prescription medication to pay bills, as their Social Security checks are spent on gambling, according to Investigator Ryan Lowe with the Muskogee County Sheriff's Office Special Investigations Team.

"We think they're doing this month to month," Lowe said Tuesday morning. "We think they have legitimate health reasons why they need the medications but then sell them."

The narcotics sting began a few days earlier when investigators got an anonymous tip.

"We made several calls and set up the transaction with the two individuals," Lowe said. "We agreed on a price and location to meet."

The couple agreed to meet officers in Oktaha. Sumpter and Hawbaker drove in from Maysville, about an hour south of Oklahoma City. They brought 359 pills including Soma, Xanax, Norco and Lortab.

Sheriff's deputies and Muskogee Police officers took them into custody for possession of a controlled dangerous substance with intent to distribute and unlawful delivery of narcotic.

Officers also confiscated $4,617 in cash they believe were drug profits.

"We don't get them all, but we're pretty excited we stopped 359 pills from reaching the citizens," Lowe said.

Investigators say prescription drug abuse is a huge problem in the nation and especially Oklahoma.

They say, above and beyond cocaine, marijuana and heroin, it's become the number one abused substance.

They say, in this case, it wasn't just the misuse of drugs, but also of taxpayer money.

"The sad thing about it is, they're using Medicaid/Medicare to pay for the prescriptions, so the government is footing the bill, while they're out making money. It's a bad deal, a burden on the taxpayers," Lowe said.

Police tell News On 6 the Hawbaker did not have a criminal history and Sumpter had a couple of past DUIs.