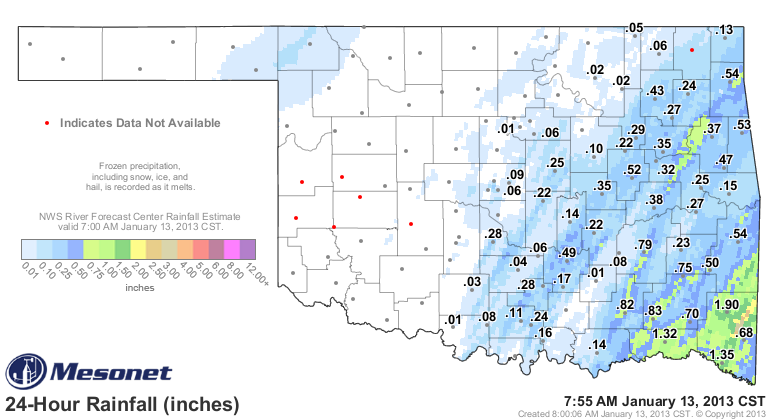 The first map on the right, courtesy of the OK Mesonet, shows the total precipitation over the last 24 hours. Those numbers may be a bit low as the automatic sensors no doubt froze up due to the subfreezing temperatures that moved in while at least some of that precipitation was still falling. In fact, there is still some light frozen precipitation in the form of sleet/snow in the more E/SE counties early this morning.

The second map on the right shows the QPF(Quantitative Precipitation Forecast) for the coming week and is valid through Friday morning. Clearly, our prospects for any additional precipitation are pretty much in the slim to none category through that period, and quite frankly well beyond that.

So, the only real forecast issues this morning are temperatures and how cold it will be. Since most of what fell was not snow, there is not a snowpack nearby to impact temperatures. Even so, the high pressure ridge moving over us is very cold and dry. As a result, temperatures will likely stay below the freezing mark today, dropping into the lower teens tonight, and then struggling to get above freezing on Monday. Brisk northerly winds today will calm down tonight, but wind chill values will still be down into the teens and possibly even the single digits at times.

The broken cloud deck will gradually clear from W-E later in the day and we should have generally fair skies tonight. That, together with the lighter winds will produce some single digits for the normally colder locations and lower teens elsewhere.

Only some occasional high level cirrus clouds are expected for much of the coming week and as mentioned, we expect to be dry all week long. Temperatures will gradually moderate as our winds become more W to SW on Wed, a brief return to NE winds on Thu, followed by a more southerly wind component for Fri and Sat. That should get our daytime temperatures back into the 50s by Fri and Sat, but another cold front may move through on Sunday.

As has been the case for much of the cold season, the longer range guidance remains inconsistent. There are some indications that the coldest air of the season may arrive just beyond this forecast time frame, but it is too early to have much confidence in that scenario. Unfortunately, the longer range guidance is pretty consistent in keeping us relatively dry with no major precipitation makers coming this way in the foreseeable future.

In the meantime, stay warm, stay tuned, and check back for updates.