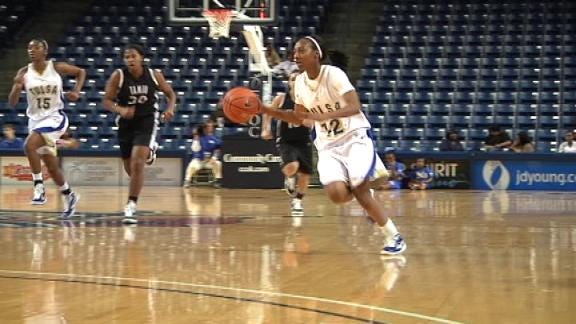 Taleya Mayberry, Kadan Brady and Jessica McQuin all scored in double digits to lead Tulsa to a 75-62 win over Grambling State on Saturday afternoon at the Fredrick C. Hobdy Arena in Grambling, La. TU moved to 4-7 on the season, while GSU fell to 1-9 overall.

Mayberry had a team-leading 15 points, while Brady and McQuin each recorded 10 points. Tiffani Couisnard, Loren McDaniel and Mariah Turner all added eight points in the contest. McDaniel pulled down eight rebounds, while she and Mayberry had three assists, and Mayberry had five steals.

Both teams traded baskets and the lead in the first 11 minutes of the first half, but then the Hurricane went on a 21-4 run to close out the half and take a 38-28 advantage into the break. Brady and McDaniel each had eight points in the first half, while Couisnard added six.

TU never relinquished the lead and climbed to a game-high 15-point advantage in the second frame.

GSU was led by Cierra Ceazer with 15 points, while Joanna Miller and Bianca McCowan each had 11, and Kamiya Burwell had 10. Ceazer registered nine rebounds, Burwell and Miller both had four assists, and Burwell totaled five steals.

Tulsa will return to action on Sunday, Dec. 30th against Stephen F. Austin. Game time is set for 2:00 pm in Nacogdoches, Texas.