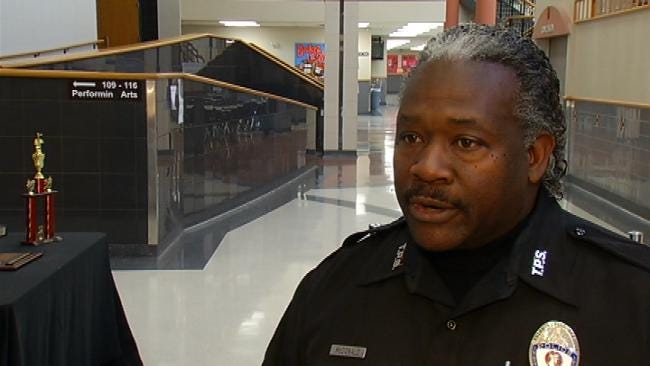 Every day, Officer Alvin McDonald and his men patrol the halls of Washington High school.

Booker T. has three armed guards at all times during the school day, looking for things like unlocked outside doors.

"Like this one was open, that could be breach, a suspect could get in," said McDonald.

Booker T. Washington is an example of the best security in the Tulsa Public Schools District, with armed guards, locked doors and video surveillance throughout the campus.

Administrators walk the halls to look for problems while the guards concentrate on the entrances.

But only half of the schools have armed guards or any real security equipment. The other half are on a waiting list for electronic door locks and security cameras, but that job won't be finished until 2015.

Booker T. has it all.

"Our main objective is to make sure that everyone can learn in a safe environment and we'll do that with every ounce of our being," McDonald said.

Monday, TPS announced a new effort to help fill the gaps at other schools with more patrols and visits from Tulsa Police.

"They're going to talk to the staff there, how are they feeling, is there anything they're concerned about and when they have some down time, to do their reports, they can do that in the parking lot," said Chief Gary Rudick, of TPD.

The school district believes the extra visibility will help deter criminals who might target the schools.

At BTW, Principal James Furch said he believes it's essential to have an armed guard on campus, at all times.

The district has to balance the cost of security. The money for teachers and campus police comes from the same source, and each officer costs $28,000a year, at least.

That's why many schools - all but one of the elementary buildings - have no armed security on site.