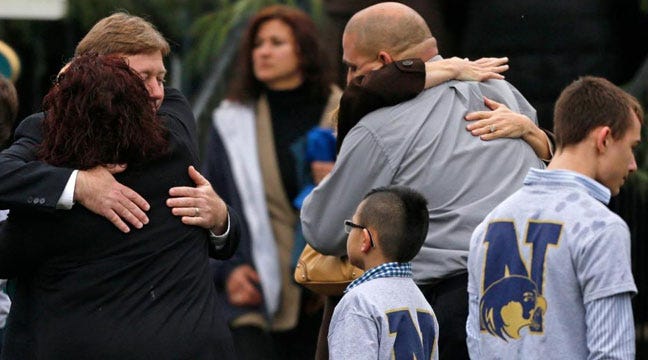 A grief-stricken Newtown began laying to rest the littlest victims of the school massacre, starting with two 6-year-old boys — one of them a big football fan, the other described as a whip-smart youngster whose twin sister survived the rampage.

Family, friends and townspeople streamed to two funeral homes to say goodbye to Jack Pinto, who loved the New York Giants and idolized their star wide receiver Victor Cruz, and Noah Pozner, who liked to figure out how things worked mechanically.

A rabbi presided at Noah's service, which was attended by Connecticut Gov. Dannel P. Malloy, and in keeping with Jewish tradition, the boy was laid to rest in a simple brown wooden casket adorned with a Star of David. Outside the funeral home, well-wishers placed two teddy bears, a bouquet of white flowers and a red rose at the base of an old maple tree.

"If Noah had not been taken from us, he would have become a great man. He would been a wonderful husband and a loving father," Noah's uncle Alexis Haller told mourners, according to remarks he provided to The Associated Press. Both services were closed to the news media.

Haller described a smart, funny and mischievous child who loved animals and Mario Brothers video games, and liked to tease his sisters by telling them he worked in a taco factory.

"It is unspeakably tragic that none of us can bring Noah back," Haller said. "We would go to the ends of the earth to do so, but none of us can. What we can do is carry Noah within us, always. We can remember the joy he brought to us. We can hold his memory close to our hearts. We can treasure him forever."

Noah's twin sister, Arielle, who was assigned to a different classroom, survived the killing frenzy by 20-year-old Adam Lanza that left 20 children and six adults dead last week at Sandy Hook Elementary in an attack so horrifying that authorities could not say whether the school would ever reopen.

At Jack's service, which Lt. Gov. Nancy Wyman attended, hymns rang out from inside the funeral home. A mourner, Gwendolyn Glover, said that Jack was in an open casket and that the service was a message of comfort and protection, particularly for other children.

"The message was: You're secure now. The worst is over," she said.

The funeral program bore a quotation from the Book of Revelation: "God shall wipe away all tears. There shall be no more death. Neither sorrow nor crying, neither shall there be any more pain."

Jack was described in the program as "an incredibly loving and vivacious young boy, appreciated by all who knew him for his lively and giving spirit and steely determination" who enjoyed baseball, skiing and wrestling in addition to the Giants.

A fir tree opposite the funeral home was strung with paper angels carrying the names of everyone who died, including the teachers.

Malloy called on Monday for a moment of silence and for churches to ring bells Friday, exactly one week after the shooting. Speaking to reporters in Hartford, Malloy asked churches ring their bells 26 times to honor the victims.

At both funeral homes, people wrestled with the same questions as the rest of the country — what steps could and should be taken to prevent anything like the massacre from happening again.

"If people want to go hunting, a single-shot rifle does the job, and that does the job to protect your home, too. If you need more than that, I don't know what to say," Ray DiStephan said outside Noah's funeral.

With more funerals planned this week, the road ahead for Newtown, which had already started purging itself of Christmas decorations in a joyful season turned mournful, was clouded.

"I feel like we have to get back to normal, but I don't know if there is normal anymore," said Kim Camputo, mother of two children, 5 and 10, who attend a different school. "I'll definitely be dropping them off and picking them up myself for a while."

With Sandy Hook Elementary still designated a crime scene, State police Lt. Paul Vance said that it could be months before police turn the school back over to the district. The people of Newtown, consumed by loss, were not ready to address its future.

"We're just now getting ready to talk to our son about who was killed," said Robert Licata, the father of a student who escaped harm during the shooting. "He's not even there yet."

Portraits of the victims became clearer during the weekend as families began coping with the tragic losses.

Robbie Parker, the father of 6-year-old Emilie, honored his oldest daughter in a moving tribute Saturday, tearfully describing her as the "type of person that could light up a room ... she always had something kind to say about anybody and her love and the strength that she gave us and the example that she showed us is remarkable.

Six-year-old Jessica Rekos was remembered as a horse lover who had asked Santa for new cowgirl boots and a cowgirl hat. In a statement, her family wrote about their "rock."

"We called her our little CEO for the way she carefully thought and planned everything. We cannot imagine our life without her."

Ana Marquez-Greene, who even at the age of 6 displayed an angelic singing voice in home movies released by her family, was mourned by her father, jazz musician Jimmy Greene, in a statement that read "As much as she's needed her and missed by her mother, brother and me, Ana beat us all to paradise. I love you, sweetie girl."

There were also the women whose passion for their jobs cost them their lives.

Dawn Hochsprung's pride in Sandy Hook Elementary was clear. She regularly tweeted photos from her time as principal there, giving indelible glimpses of life at a place now known for tragedy. Just last week, it was an image of fourth-graders rehearsing for their winter concert; days before that, the tiny hands of kindergartners exchanging play money at their makeshift grocery store.

She viewed her school as a model, telling The Newtown Bee in 2010 that "I don't think you could find a more positive place to bring students to every day." She had worked to make Sandy Hook a place of safety, too, and in October, the 47-year-old Hochsprung shared a picture of the school's evacuation drill with the message "safety first." When the unthinkable came, she was ready to defend.

Officials said she died while lunging at the gunman in an attempt to overtake him.

"She had an extremely likable style about her," said Gerald Stomski, first selectman of Woodbury, where Hochsprung lived and had taught. "She was an extremely charismatic principal while she was here."

Twenty-nine-year-old Rachel D'Avino was due to be engaged on Christmas Eve. D'Avino was a behavioral therapist who had only recently started working at the school where she was killed, according to friend Lissa Lovetere Stone.

Police told her family that she shielded one of the students during the rampage, Lovetere Stone said.

Thirty-year-old Lauren Rousseau's family said in a statement: "Lauren wanted to be a teacher from before she even went to kindergarten. We will miss her terribly and will take comfort knowing that she had achieved that dream."

The family of Vicki Soto, 27, also takes some comfort in knowing that her last act was for the children she loved, shielding them with her body.

"Whatever details transpired in that classroom, we know in our hearts that she was protecting those kids from that shooter," cousin Jim Wiltsie said.

Those are just some of the personal stories that emerged as Newtown and the nation as a whole came to grips with Friday's attack.

Classes were canceled Monday, and Newtown's other schools were to reopen Tuesday. The district made plans to send surviving Sandy Hook students to a former middle school in the neighboring town of Monroe.

Sandy Hook desks are being taken to the Chalk Hill school in Monroe, empty since town schools consolidated last year, and tradesmen are donating their services to get the school ready within a matter of days.

"These are innocent children that need to be put on the right path again," Monroe police Lt. Brian McCauley said.