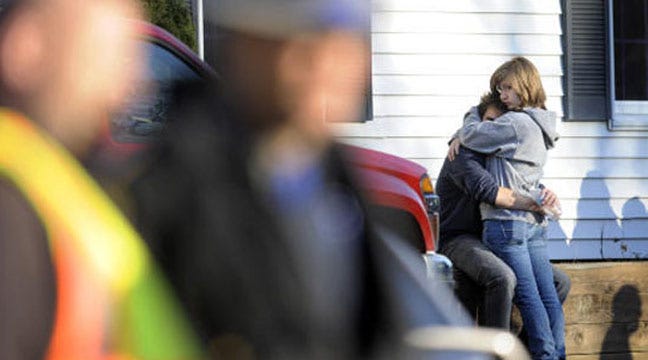 A man opened fire Friday inside the kindergarten classroom at the Connecticut elementary school where his mother was a teacher, killing 20 children, as youngsters cowered in corners and closets and trembled helplessly to gunshots reverberating through the building, before the gunman took his own life.

The bodies of most of the children killed in the morning remained inside Sandy Hook Elementary School in Newtown, Conn., Friday evening, along with the bodies of six adults and the gunman himself, Connecticut State Police spokesman Lt. Paul Vance told "CBS Evening News" anchor Scott Pelley.

As SWAT teams surrounded the school, state troopers moved students to safety. Some children were told to close their eyes to protect them from seeing the carnage. The police eventually found the gunman dead from a self-inflicted wound, the police said.

Among the dead was the school's principal, Dawn Hocksprung. One teacher was wounded but survived.

The attack, coming less than two weeks before Christmas, was the nation's second-deadliest school shooting, exceeded only by the Virginia Tech massacre that left 33 people dead in 2007.

"This is most definitely the worst thing that we have experienced in town - tragic," Newtown police Lt. George Sinko told reporters.

Ryan Lanza is being questioned by authorities in New Jersey, Milton reports. As of Friday evening, Ryan Lanza was not considered a suspect, CBS News correspondent Bob Orr reports.

Investigators believe the killing spree began at the home Adam Lanza shared with his mother. Orr reports she was killed there, then Lanza drove to the school in his mother's black Honda, armed with three weapons.

Lanza apparently targeted his mother's classroom at the school, the law enforcement official told CBS News. Some of her students were among those killed.

A federal official told CBS News that, according to state records, all three weapons that Lanza had with him were bought legally and were registered to Lanza's mother.

The shooting took place in two classrooms, Vance told reporters at an afternoon news conference. Eighteen children died at the school, some as young as 5. Two more died after being transported to area hospitals, he said.

The school teaches about 700 students between kindergarten and fourth grade.

Orr reports that authorities found two guns on the gunman's body, a Glock 9 mm pistol and a Sig Sauer pistol. A Bushmaster assault rifle was found in the vehicle, Orr reports.

President Obama promised action to prevent such tragedies again but did not say what that would be.

"Our hearts are broken today for the parents and grandparents, sisters and brothers of these little children and for the families of the adults who were lost," an emotional Mr. Obama said Friday afternoon in a statement delivered from the White House briefing room.

"Our hearts are broken for the parents of the survivors, as well," said Mr. Obama. "For, as blessed as they are to have their children home tonight, they know that their children's innocence has been torn away from them too early, and there are no words that will ease their pain."

A dispatcher at the Newtown Volunteer Ambulance Corps said a teacher had been shot in the foot and taken to Danbury Hospital.

A photo posted by The Newtown Bee newspaper showed a group of young students — some crying, others looking visibly frightened — being escorted by adults through a parking lot in a line, hands on each other's shoulders.

An 8-year-old student told CBS New York station WCBS-TV he was on his way to the school's office when he saw the gunman.

"I saw some of the bullets going down the hall and then a teacher pulled me into her classroom," the boy said.

Robert Licata said his 6-year-old son was in class when the gunman burst in and shot the teacher.

"That's when my son grabbed a bunch of his friends and ran out the door," he said. "He was very brave. He waited for his friends."

He said the shooter didn't utter a word.

Stephen Delgiudice said his 8-year-old daughter heard two big bangs and teachers told her to get in a corner. His daughter was fine.

"It's alarming, especially in Newtown, Connecticut, which we always thought was the safest place in America," he said.

Delgiudice's daughter told him that she heard the loudspeaker come on and swearing being broadcast over it, Delgiudice told CBS News. That prompted the teacher to lock the classroom door.

Lisa Bailey, a Newtown resident with three children in Newtown schools, told CBSNewYork.com, "Newtown is a quiet town. I'd never expect this to happen here. It's so scary. Your kids are not safe anywhere."

Mergim Bajraliu, 17, heard the gunshots echo from his home and ran to check on his 9-year-old sister at the school. He said his sister, who was fine, heard a scream come over the intercom at one point. He said teachers were shaking and crying as they came out of the building.

"Everyone was just traumatized," he said.

Mary Pendergast, who lives close to the school, said her 9-year-old nephew was in the school at the time of the shooting, but wasn't hurt after his music teacher helped him take cover in a closet.

Richard Wilford's 7-year-old son, Richie, is in the second grade at the school. His son told him that he heard a noise that "sounded like what he described as cans falling."

The boy told him a teacher went out to check on the noise, came back in, locked the door and had the kids huddle up in the corner until police arrived.

"There's no words," Wilford said. "It's sheer terror, a sense of imminent danger, to get to your child and be there to protect him." 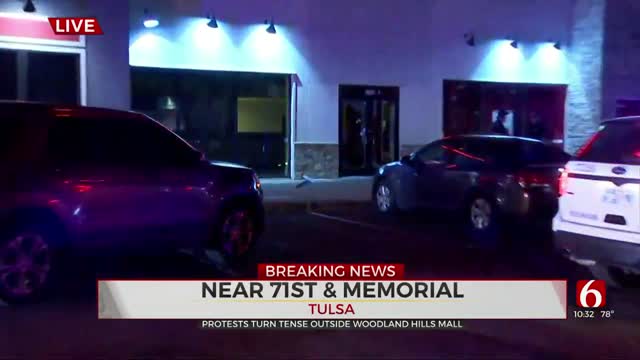 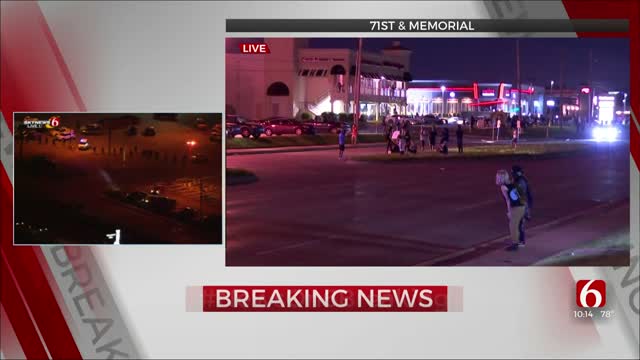 Woman Talks About Her Reasons For Her Peaceful Protesting In Tulsa

News On 6 A woman from another night of protests in Tulsa explains her powerful purpose for protesting. 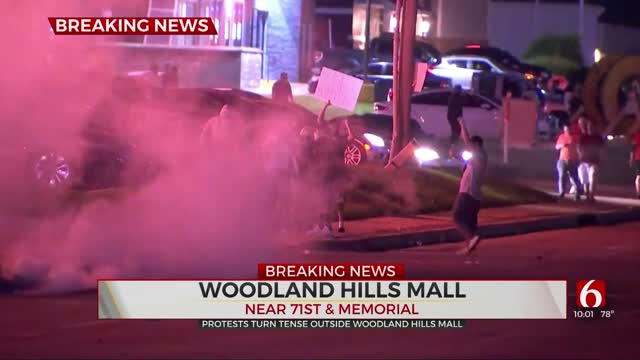 Sawyer Buccy Protesters left behind destruction to businesses as the demonstrated in another round of Tulsa protests Monday night.
View More Stories

Woman Talks About Her Reasons For Her Peaceful Protesting In Tulsa

News On 6 A woman from another night of protests in Tulsa explains her powerful purpose for protesting.